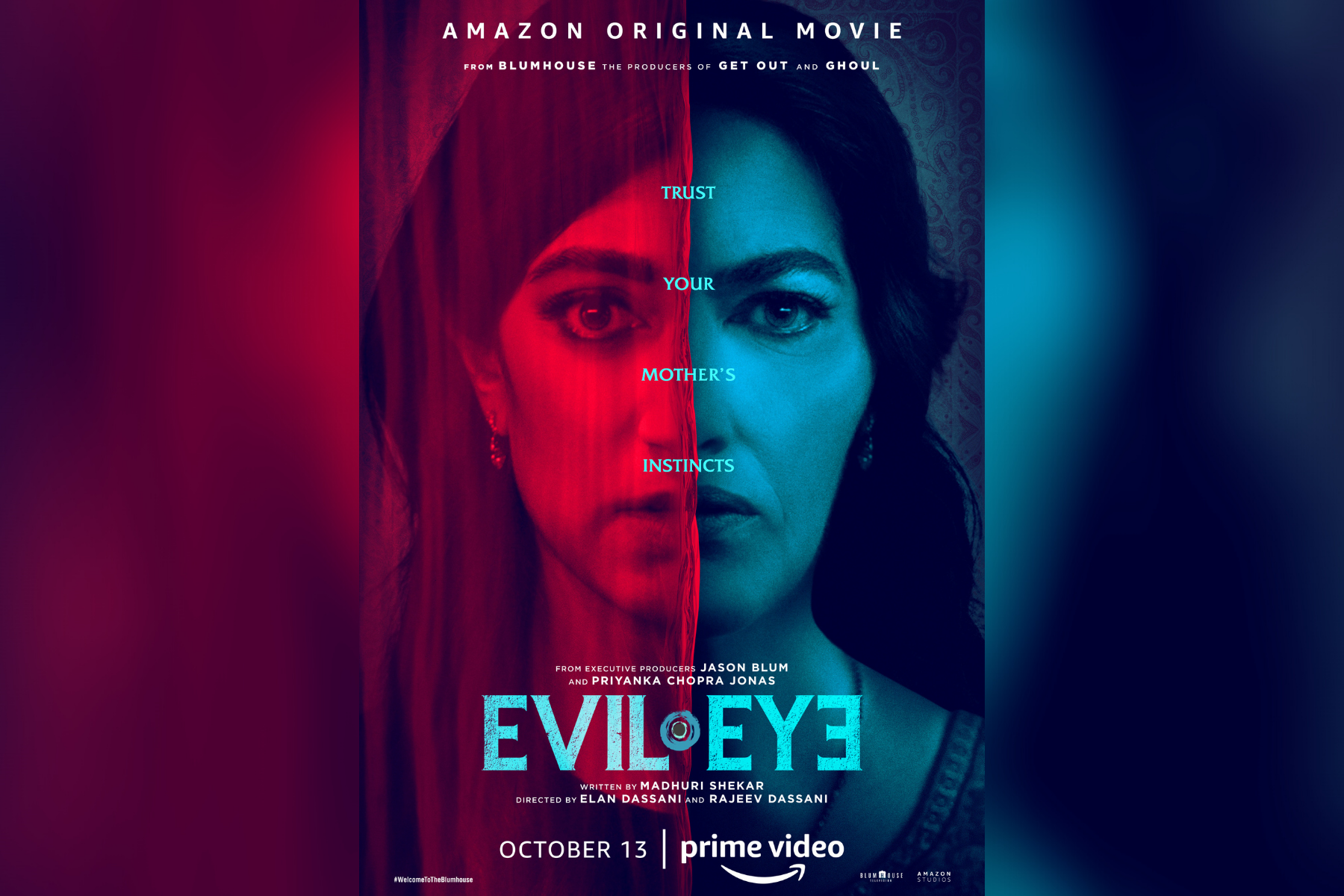 Guys, it’s finally happened. Starring an all-South Asian cast, directors, writer, and even some producers, Blumhouse & Amazon’s new film, “Evil Eye,” is one of the first horror/thriller movies we’ve seen in Hollywood that showcase South Asian talents. The film follows Pallavi and her mother, Usha, who have a strong bond and talk every day, despite Pallavi being in America and Usha in India. When Pallavi tells her mother about her new boyfriend, Sandeep, the superstitious Usha believes he might be the reincarnation of an old abusive boyfriend, and does everything she can to stop the budding romance before it’s too late.

The moment I heard this film was being made, I jumped at the chance to speak to the team who brought it together. I had the pleasure to talk to writer Madhuri Shekar, the brain behind this story — which originally started as an Audible audio play (!) — and what the term “evil eye” really means to her.

Rajeev and Elan Dassani, the directors of the film, also chatted with me about everything from their mom, having each other on set, and having the unique experience to work with so many South Asians in one setting.

As South Asians, we all have very different definitions and experiences with an “evil eye.” What is it to you?

“So evil eye to me is slightly something different than how I use it in the movie. So to me, it’s a glance intended to cause harm, right. That’s what it is for my family. The thing about it in our family is that my mom keeps insisting that people do it without meaning to. And you just kind of go through this fog of life and think, ‘did somebody put the evil eye on me on accident?’ ‘Is this why I’m having a bad day?’ And that’s how I experience it in my daily life.”

How do you prevent it?

“I call my mom. And she does the thing, she snaps her fingers, she chants the thing. Sometimes she uses the spoon and lights a flame — she does it all through FaceTime. I have a baby boy so she does it every day for him.”

Where did this story come from? What inspired you to write this?

“I thought immediately, ‘oh I’d love to write a horror play.’ That was the genre that I’d been interested in writing for the stage and I thought with this audio format, there’s all this potential opening up. I could write something very scary because you’re listening to it and you can’t really see what’s going on. So I started with that goal in mind and I started thinking what do I like listening to in terms of podcasts or audio content, and I thought, ‘I really love phone calls, I love conversations. Conversations between people I find really fascinating.’ And from there, I’m like ‘well I talk to my mom every day on the phone every day. What if it’s a series of phone calls between a mother and a daughter? My mother lives in India and I live in America so we’re very far away and what if it’s that situation in the play? And let’s see if I can build a horror out of that.’

I remember trying to figure out what the story could be about, and my husband, who is not Indian asked, ‘Is there anything in Indian culture that is particularly scary? Like do you have a monster? Like the Irish have the Banshee?’ And I thought no, but the concept of reincarnation could be pretty frightening if you think about it in a certain way. So that’s kind of those pieces all came together.”

Interesting! And how was the process from audio to film?

“It was really amazing. The story of how this happens never happens to emerging writers. I’d written the play and it was ready to be streamed around May 2019. And then my manager for TV/Film had the script circulating, and Blumhouse, Amazon, and Purple Pebble Pictures kind of all came together at the same time to be like we’re interested in this. And Blumhouse already had a deal with Amazon to produce independent horror films. ‘Evil Eye’ just fit perfectly with their mission, their tone, the budget, you know, all the important things. So, I came on board to adapt the screenplay and I started writing Summer 2019. And by Fall 2019, we found our amazing directors, the Dassani brothers, and then in November 2019 they had shot the film. So this never happens. This timeline is insane. And that’s how it all panned out!”

What was it like to see so many South Asians working on your story?

“It’s one of the most special experiences of my life. The Dassani brothers are incredible. They were looking for underrepresented directors and the fact that we found Rajeev and Elan is so special. I remember their pitch deck, it’s what won them over, their pitch started with, ‘this reminds of us of our mom.’ And that was it! That’s all I wanted, I wanted someone to come in with that personal connection.

When I saw the final cut of the movie, there were just so many moments, but there is something so specific about seeing the romance on screen between two incredibly attractive South Asian actors on screen and having an incredible romance, I hadn’t seen that before. I just think it’s all so great and wonderful.”

What advice do you have for aspiring writers?

“The hardest thing to do is finish, you know? Finish scripts, finish your book, finish your article, finish your poems. Do whatever you can to trick yourself into finishing your work. Sign up for a class, sign up for a writer’s group that you’re actually scared of disappointing, don’t do a writers group with your best friend. Figure out some way to finish the thing you’re working on. The feeling of having finished something you’re working on is the greatest feeling one could have.”

Guys, I spoke to Madhuri earlier and she had mentioned you started your pitch deck off with, “this reminds us of our mother” — can you expand on that?

Rajeev: “So basically we’re first-gen Indian, and our mother is into horoscopes, superstitions, astrology. Whenever we dated anyone, she would ask when they were born, what time. You know she calls us all times of the day to tell us, ‘Watch out for today because it’s a dark day or don’t invest money today because the moon is kind of an issue!’ And she was very invested in marrying the right kind of people, so we really related to that.”

And here’s a question I asked Madhuri, but I’m curious about your answer, too: what does “evil eye” mean to you?

What was it like working with a whole roster of South Asians on and off-screen?

Rajeev: “Honestly, a dream come true. It’s so rare you see a major Hollywood studio like Amazon and Blumhouse with this many South Asians, like you said behind the scenes and on the screen! What was lovely is that, we wanted to tell a universal story and it’s not intended for just South Asians. And what we found was that people are craving unique stories that are not necessarily their own experiences because they love being let into that world. We loved having some of the top South Asian actors in our film and we just pinched ourselves. Like come on, having Sarita Choudhury? She is like the best ever. It was a dream come true to work with her. Then we have Sunita [Mani], Omar [Maskati], Bernard [White]! These are top actors. It was great.”

So you mentioned you’re both first-generation Indians… How did your parents react to you working in this industry?

Elan: “Um, so our parents were a bit skeptical…”

Rajeev: “they were THRILLED! No consistent paycheck? What!”

Elan: “So we did our first show for Netflix early last year called ‘Jinn,’ and I remember our dad called us and was like, ‘make sure Netflix pays you!’ And we were like we think they’re gonna pay us? It’s Netflix!”

Rajeev: “They wanted us to be careful, but they were also supportive, I have to give them credit. They never really understood exactly how it’s consistent but I think they realized how passionate we were. And I think we have had some success, they’ve realized like, ‘oh it’s not a hobby, they’re doing this.'”

Elan: “I don’t think it really hit until they were like, ‘Oh you talked to Priyanka Chopra? Okay cool!'”

Rajeev: “This is our first feature we’ve directed together and what’s so interesting is that what we’ve found is that although our tastes are similar they’re not always exactly the same, and so often times we’d actually disagree on set — which is nice. And we’d stop and talk about why we think this or that and we found a nice balance that was better. We’d push each other to be better. And now occasionally we’d actually really disagree — we’re siblings!”

[Read Related: Radhika Apte On ‘A Call to Spy’ and the Fight for Equality On & Off Screen]

What advice do you have for younger South Asian filmmakers in the industry?

Elan: “The core advice is that don’t try to make the film, the project, write the thing that you think somebody else wants. Write or make the thing that you wanna see. Oftentimes we see someone be like, ‘Oh I’m trying to be like this guy or that guy.’ Whatever. The more authentic you are to yourself, the more general audiences and people will want to see.”

Rajeev: “I would tell any South Asian writer, director, everyone that you can tell any story you want, you don’t have to tell a South Asian story. However if that means something to you and you have passion for it, then please do it. Like Elan said, people love others for their authentic voice. Yes, you are South Asian but you can do a big action film, you can do an intimate drama, you can do a rom-com, whatever. There’s been this default of, ‘white male directors can do anything.’ Well the reality is that we can all do anything. And there is something wonderful about that.”

“Evil Eye” is now streaming on Amazon. It’s an experience for sure, and definitely worth a watch.