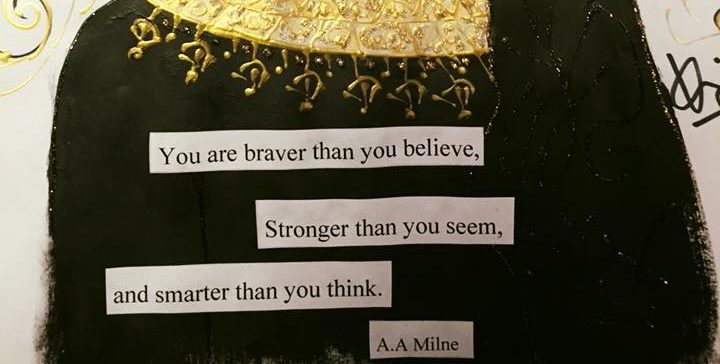 In the realm of fashion illustrations, women live perfect lives. They are either shopping at Chanel or sipping champagne in Paris. Their designer clothes flow effortlessly as they chat on embellished phones while holding Louis Vuitton purses and hail cabs. I would imagine that these illustrations serve as an escape for women like myself whose lives might not always be picture perfect.

My current series of paintings deals with the global refugee crisis and the tragedy of their daily struggle to survive. Immersing myself in heartbreaking stories can get overwhelming.

I began to create quick sketches of glamorous women to serve as an escape from my inevitable responsibilities of preparing for back-to-back solo shows. As I followed top fashion illustrators on social media, I realized something was missing. South Asian women were pretty much non-existent in the fashion illustrations genre. Since it felt natural to draw women with whom I identified, I decided to focus on fashion forward women in shalwar kameez and saris. 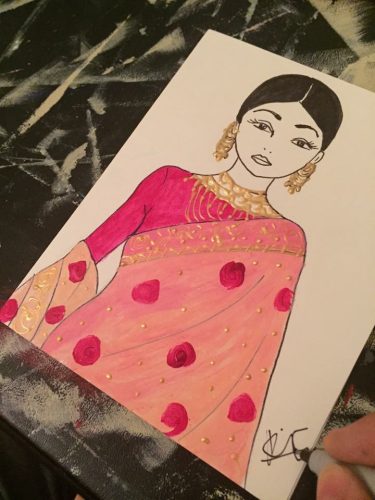 [Cards inspired by my mother’s saris]

As my sketches became more frequent, I put some further thought into them. From time to time, these women came out of their fantasy world to deal with real issues; from stay-at-home-frazzled moms with no time to change out of their t-shirts and shalwars, to women losing willpower when faced with the temptation of chocolate. 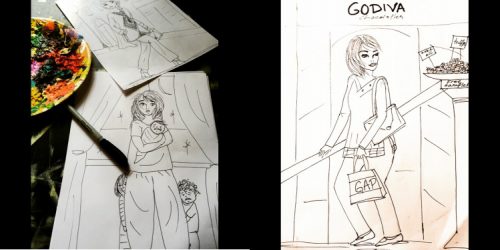 One day, I was in the shower and felt a lump in my underarm area. Since my mom had breast cancer, this would be cause for alarm. I started crying–not because I was afraid of getting cancer; that didn’t scare me. I got emotional because I remembered that my mother used to be self-conscious about her mastectomy scars. I created the following piece, with a message to women/girls who grapple with loving their bodies. 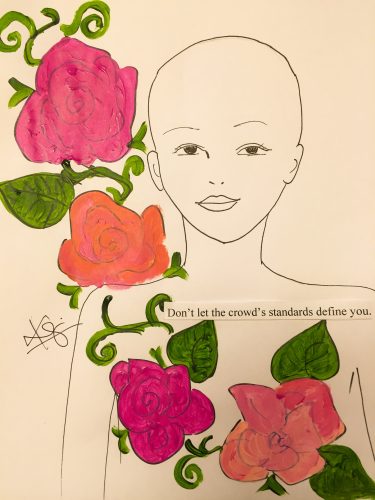 [“I wish I would have told her then, that it is not the beauty of our bodies that define who we are, but the strength of our souls. Don’t let the crowd’s standards define you.”]

[Read Related: An Open Letter to all Men Who Judge Women]

Since then, my “escape” sketches have evolved into strong women who are in command. They have something to say, and they are not afraid to use their voice. 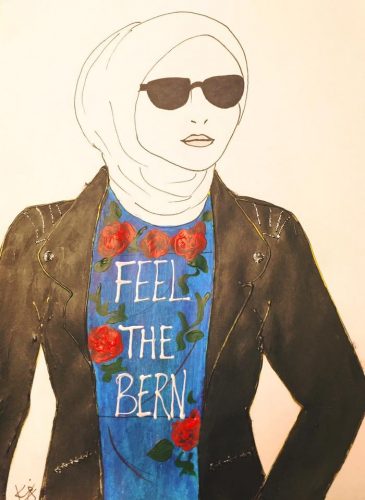 [The Bern is strong with this one]

Their purpose is to inspire those who may need it at that particular moment in life when things seem dismal. 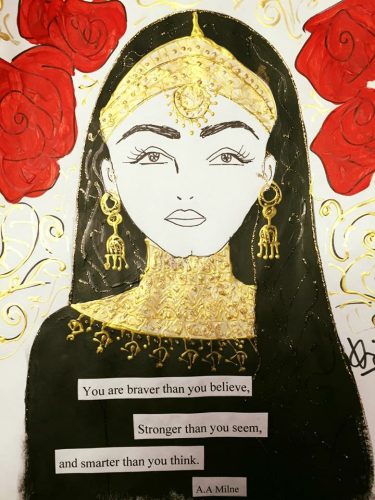 [“You are braver than you believe, stronger than you seem, and smarter than you think.” -A. A. Milne]

My exploration of the fashion illustrations genre began while looking for an escape from the heavy subject matter I was dealing with at the time. It progressed to discovering the need for brown girl representation in an arena that was lacking. Through this process, I found a way to bring inspiration to myself. My hope is that this inspiration extends itself to my audience.

Kulsum Tasnif is a visual artist preparing for upcoming solo shows at the Carrack Modern Art and Page Walker Art Center in NC. Recent juried exhibits include Art+Dialogue: Responding to Racial Tensions in America, Pakistan Day at USC Pacific Asia Museum, and Contemporary South at the Visual Art Exchange. She was recently selected to be the Arts Now NC Focus artist. Her essays have been published in Patheos and Creative Ummah. You can follow her work on Facebook, Instagram, and her website.