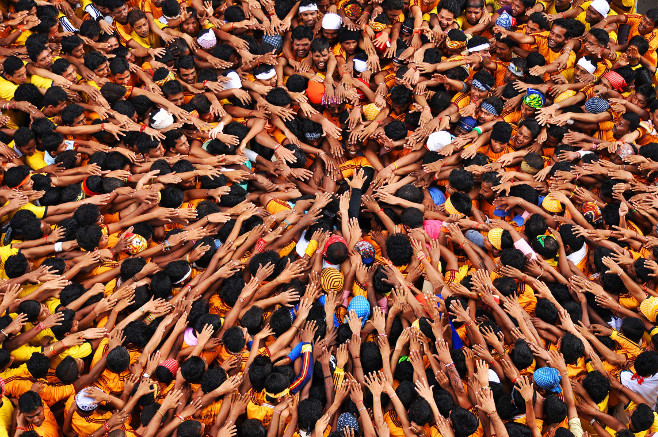 Originally Appeared on The Feminist Wire:

We’ve already buried so much of our different, it feels so hard to find.

Almost every day, my friend and I exchange poetry, current articles, quotes, and the casual Buzzfeed posts in an effort to satiate our love of reading. We live in different places, work different jobs, and have different aspirations, but this is how we find common ground—by keeping an almost 10-year-long dialogue going about things we perhaps care too much about and things we should pay more attention to.

Through this exchange, I have come across a lot of essays, academic critiques, books, spoken word, and poetry about the South Asian diaspora and the many ways in which those of us who identify as first generation Americans feel about the spaces we create for ourselves to find common ground with our communities. After reading Alok Vaid-Menon’s, “keep quiet, smile back (where you came from),” my friend wrote back saying, “We have already buried so much of our different, it feels so hard to find.”

For some reason that brought me back to a specific moment in my senior year of college, when I sat with two of my closest friends in the Engineering building. We used to commandeer classrooms for marathon study-sessions that usually turned into marathon discussions about things that felt more important than the actual academic work we had due. Books were splayed across tables alongside half eaten-take out, surrounded by the sound of three 20-somethings who learned about themselves through each other without even realizing it. This specific conversation regarding our backgrounds – Indian, Mexican, “White,”  Nigerian, Guyanese, American – encapsulated the differences and similarities in our identified genders, politics, and viewpoints on our varied minority experiences. This moment highlighted how much we struggled to maintain that difference.

It often seemed that through each other we were coming to terms with the years we had spent burying our differences in order to prescribe to both a societal and self-imposed model of the “American dream.” We metaphorically rearranged, created dichotomies, or glossed over the complexities that connected us to more than one space, culture, language, and worldview.

My close relationships consisted of individuals that challenged each other’s model because they saw beyond the carefully constructed cast of gender norms, cultural socialization, geographic upbringings, socio-economic status, accolades, and reputation. Those are the people that will help you create a new model, one that embraces, explores, and challenges the differences we all inherently have.

To my friend from Texas, who often forgot the words for a specific item in English because she didn’t use the English word for it back home, we would communicate in gestures and descriptions, both feeling ridiculous that we knew certain words in our original tongues, but not our shared one.  To the New York-born and bred friend who paused for a minute when I said, “You’re first generation too,” unsure if that was an identity he wanted to claim or cast off.

To discussing how not having health insurance didn’t seem like big deal because it’s “just the way it was” in her Texas town. To dealing with self-identity and belonging when you were told, “you didn’t act black.” To feeling comfortable in a classroom to speak truthfully, passionately, and to admit ignorance in order to better connect with another person.

These are close relationships I had in college— strong, beautiful, whole relationships between people from different communities of color.  We claimed some of the “shared experiences” as Indian, Mexican, Black, Caribbean, Maharashtrian, mixed-race, Brahmin, poor, upper-middle class, women, men, first-generation, immigrants, model minority, fetishized, sexual, prude, white-washed, but some of the identities were placed on us and, perhaps, questioned by us. It was clear that, initially, we too buried our differences from one another. Perhaps unconsciously we hid them because it’s what we always did. That’s themodus operandi.  The face you show the world. Maybe we didn’t even realize the extent to which we did it. But we all did it.

Our past experiences, and the judgments we faced, as people of color within white dominated groups who were always asking someone to speak [insert native language] felt like more of a spectacle. All of us having one name or another that has been mispronounced and changed to fit a foreign tongue shows the ways we have buried our full, complete, whole, raw identities to fit a white ideal. We were reminded in some way or another that differences weren’t something to be championed, unless it was for “diversity purposes.” Where your entire personhood was diminished to that one [insert ethnic background] guy/girl as the sole identifier of your entire being. Where you just couldn’t explain certain nuances of your culture without over-simplifying. This is not to say that there aren’t those non-POC friends who try everyday to break down such walls, but there are too many who don’t.  So we buried ourselves until we started to believe this is who we actually were.

So it was in those moments in the Engineering building, one of our dorm rooms, or on midnight bike rides that we forgot the exams, papers, and commitments. We just sought a different kind of learning through raised voices, not in anger, but excitement and passion, challenged perspectives, shared experiences and stories, disagreed, and somehow created an environment where we were brave enough to just be. We were intensely protecting, fighting for, claiming the very thing that we so often shied away from our entire lives – the origin story – and through it realized that every relationship in our lives will start with a story.

It’s those moments that make me believe that your “different” isn’t so hard to find. It’s always there, inside of us and ready to be shared, witnessed, told to those who ask with kindness, question, challenge, and speak in ways that make you feel like you are a whole person.

Keep those people close because they help you grow in ways you didn’t even realize. They see you in ways you don’t even see yourself. They make you feel love through simple knowing looks that no words could justly describe. Through them, you find a way to vocalize the things that have often been buried deep inside.