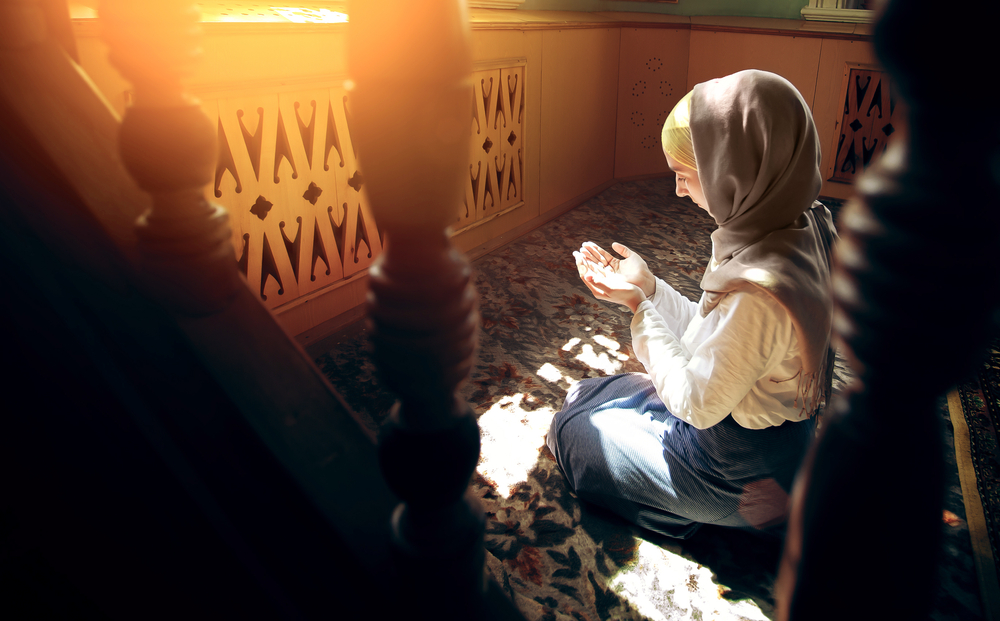 In the fourth grade, I asked Allah for long hair. When I spread my palms in front of my face to pray, I said, “Please, please, God, don’t let Ammu cut my hair off this summer.” It was my mother’s end of the school year ritual, to chop my thick locks into a horrendously jagged pixie cut, saving her time but adding to my 10-year-old brown girl insecurities. But, the summer before fifth grade, when I asked her if I could keep my hair (as I did every year), she paused for a minute and then said yes.

What else could’ve worked except for my dedicated namaz sessions?

Growing up, my sister and I were taught to turn to God for all our worries, to have conversations, to share our problems, to ask for what we needed from Allah. Islam in my life was beyond completing namaz, beyond fasting for Ramadan, beyond not eating pork. It was the way I solved my problems, it was the way I connected with myself.

One grouchy afternoon, when I didn’t want to pray alongside my mother, I asked her why we needed to pray five times a day. She answered, “it’s Allah’s way of giving us a break every few hours. When you’re praying, you don’t have to think about homework or cleaning up your toys. It’s the time for you to focus on yourself and talk to God.”

That explanation stuck with me for a long time.

My mother’s interpretation of Islam included tons of feminist elements.  She taught me about the inroads Islam made for women during the Prophet’s time; property laws, banning infanticide, education reform. She told me stories about strong Muslim female figures such as Khadija, Aisha, and Fatimah.

But as I got older, the romantic elements of Islam began to fade in my life. I started questioning a lot and as a woman, Muslim culture disappointed me.

Why weren’t we allowed to become Imams? Why did we have to pray behind the men? Why did so many mosques around the world not have spaces for women to pray?

Along with that, my mother became much more fundamental over the past two decades. She started wearing hijab while I was in high school, which didn’t bother me but what came after certainly did. She renounced a lot of the spiritual and feminist lessons she taught me as a little girl, saying she didn’t know better at the time. I was crushed.

As my parents focused more on perfecting their practice and less on the spiritual component, my Muslim identity fell apart. These days, I feel more comfortable identifying myself as a Bangladeshi-American, than a Muslim-American.

At various times, I’ve declared myself agnostic, not even fully believing it myself as the words flew out of my mouth. But it was easier to label myself as such rather than calling out what I really am: A disappointed Muslimah.

Last year, I attended a Muslim Writer’s Open Mic and felt like an outcast even though none of the people I met there did anything to make be feel that way. I listened to a few performances, ate the delicious Persian food that was catered for free and quietly slipped out of there. I felt like I had no common ground with the people there.

Islam is open to interpretation and varies in practice. Some Muslims fast and pray wholeheartedly during Ramadan and mostly neglect it the rest of the year; one of my closest girlfriends is deeply spiritual in her beliefs, but is married to a non-Muslim and chose not to get her son circumcised; another close friend has never celebrated her son’s birthday since no Islamic texts support the concept.

My initial reaction to all these people was to judge them and add these examples to my “cons of organized religion” list. But recently, I’ve been asking myself, who am I to question how people observe their faith? And, why must religion be such an all or nothing game?

The truth is, I look for reasons to judge the practice of others because of my own spiritual conflict. I haven’t been able to fit myself into any of the Muslim peg holes, especially with my feminist leanings.

But that is about to all change, since only last week, the first all-female mosque opened in Los Angeles.

The Women’s Mosque of America seeks to uplift the Muslim community by empowering women and girls through more direct access to Islamic scholarship and leadership opportunities. The Women’s Mosque of America will provide a safe space for women to feel welcome, respected, and actively engaged within the Muslim Ummah. It will complement existing mosques, offering opportunities for women to grow, learn, and gain inspiration to spread throughout their respective communities.”

The existence of The Women’s Mosque makes my spirits soar. I eagerly combed through their website, pouring over the board members’ profiles, pleased with their variety of backgrounds.

Granted, it’s much easier to have a female muezzin (the person who calls Muslims to prayer; according to Shariah law, women are not allowed to lead prayer in a mixed-gender congregation) and to have lax rules about head coverings in an all-female space, but the sense of belonging is really what I’m after at this point in my life.

After reading a particular essay about the first jumuah to take place at the Women’s Mosque of America, I too yearn to feel the same acceptance.

“It had been inclusive, diverse, and non-judgmental,” writes Tanzila Ahmed, an activist, storyteller, and politico based in Los Angeles currently working as the Voter Engagement Manager at Asian Americans Advancing Justice – Los Angeles. “There had been no policing of women’s bodies, clothes or how they prayed. Everyone had been accepted as they were.”

I happily told my mother about the Women’s Mosque of America and as I expected, she asked me, “but how can a woman give the Azaan?” But even as she said it, her words trailed off and I know the idea of it lit a fire inside of her.

After all, I do get my feminist leanings from her. This is the same woman who lowered her niqab at a wedding and told off the woman sitting next to her, that she was a moron for not letting her daughter-in-law pursue her career.

The Women’s Mosque of America has lit a fire underneath me as well. Maybe there’s something in Islam for me, after all.