I became a filmmaker by accident. In 2004, when I was working as a full time physical therapist in Washington D.C., I met a documentary filmmaker from India and was moved by her work and decided to fund her next project.

A 25-year-old dispute between Tamil Nadu and Karnataka, two southern states in India, over the fair sharing of the waters of the river Cauvery reached its boiling point in 2004. After three consecutive years of no water, farmers living in the Tamil Nadu side of the Cauvery belt were committing suicide in alarming numbers. Deeply concerned about the plight of the farmers, with no prior experience in making or funding films, I began funding a documentary with the noble intention of creating awareness about this issue.

However, the film was doomed from the start. The historic Indian Ocean Tsunami of Dec 2004 affected portions of the river and the filming had to be temporarily halted. Meanwhile, ethical and ideological differences with the director surfaced. I was afraid the film would do more harm than help the farmers and after having spent $12,000, I halted the project indefinitely.

Although my first experiences with the making of social issue documentaries was rather unpleasant, I got a glimpse of film-making as a craft and the power of media as a tool to create social awareness and catalyze social change. It took two long years for me to pay off the debts that I incurred from the “Cauvery Project” and then I began my own quest to learn film-making. I quit a decade-long career as Physical Therapist and in 2008, enrolled in University of Texas at Austin, TX for a MFA in Film Production. I have made several successful short films.

Why I made “Foreign Puzzle?”

I was barely 22 when I discovered a mysterious pea-sized mobile lump in my right breast. It was growing fast and by the time I sought medical help it was the size of a golf ball. In 1999, as a student of Physical Therapy, I ransacked the medical college library for information about breast cancer for my race and ethnic group and found practically nothing that could ease my fears. The surgeon was alarmed at the rate at which the lump was growing and promptly removed it. After a 72-hour nightmare-ish wait, I was told that the biopsy results indicated that lump was just a benign tumor. Since then, I have been super vigilant about my breasts.

For the past four years, I have been undergoing periodic mammograms and breast ultrasounds to monitor few lumps on both my breasts. Every time I am due for one of these diagnostic tests, I have this inexplicable gripping fear of an impending diagnosis of breast cancer. Would I lose my breast before I experience motherhood? Will I begin chemotherapy treatment that will kick start menopause? What kind of choices will I make? So, I began exploring these haunting personal questions through documentary film. 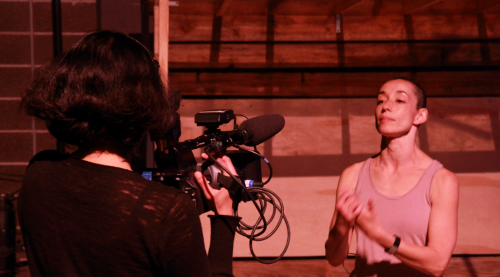 In 2011, while in graduate school at University of Texas, Austin, I met Sharon Marroquin, a Mexican American dancer who was diagnosed with breast cancer. She was totally devastated by the diagnosis. Confronted with her mortality, angered and frustrated over her inability to prevent the disintegration of her body, Sharon began to make sense of her journey through dance. I began to film the creative process that allowed her to escape to a realm that was not confined to physical limitations, disease, or the responsibility of rearing a six year old. I filmed almost every aspect of her life for 18 months.

Where is the ‘Foreign Puzzle” now?

Synopsis: “Foreign Puzzle” is the story of Sharon Marroquin, a Mexican-American dancer and choreographer living in Austin, Texas, and her roller coaster journey with breast cancer. She begins to explore the uncertainty about life and her fear of death through the creation of a  90 minute dance titled, “The Materiality of Impermanence.” The dance becomes Sharon’s only outlet and the choreography allows her to escape to another realm that is not confined by the pressure of the disease, child-rearing, teaching, and running a home as a divorced parent. How the creative process shapes Sharon’s perceptions of life and death forms the narrative arc of the film. At its heart, the film is about love, living in the moment and using art to heal the body and mind.

Now, another four years later we are very close to finishing my first long form documentary. After 18 months and 210 hours of footage, we have a strong 68 minute cut. We need money to cross the final bridge and get the film out to the world.

“Foreign Puzzle’s” greatest strength is its power to elicit empathy and initiate discussions on various topics associated with breast cancer, human relationships and the power of healing through art. The resilience of Marroquin to push through the insurmountable hurdles and create a beautiful, raw and honest dance that embodies the brutality of the disease and the beauty of the human spirit will move every viewer. It is inspirational for breast cancer survivors, advocates, caregivers, dancers, artists, art therapists, parents, and Latinos.

“Foreign Puzzle” has also come up with an inspiring way to reach out to those who are battling physical, mental and socially life altering challenges as project is equally invested in sending messages of hope and compassion to people in our communities.. Origami cranes used in the film symbolize hope and healing during difficult times. In that spirit, the film’s Kickstarter campaign wants to send 1000 handcrafted Origami cranes with personalized inspiring messages to 1000 people in 30 days.

How does one send a #HopeCrane?
1. Chose a #HopeCrane ($40 each) reward.
2. Share a 100 character message for the special someone.
3. We will do the rest and ship it.
4. The reward also includes a digital movie ticket for the film.

Chithra Jeyaram is a documentary filmmaker and film educator based in Washington D.C. She has an MFA in Film Production from the University of Texas, Austin and she makes socially conscious films that break societal barriers, build bridges, change attitudes and enable people.