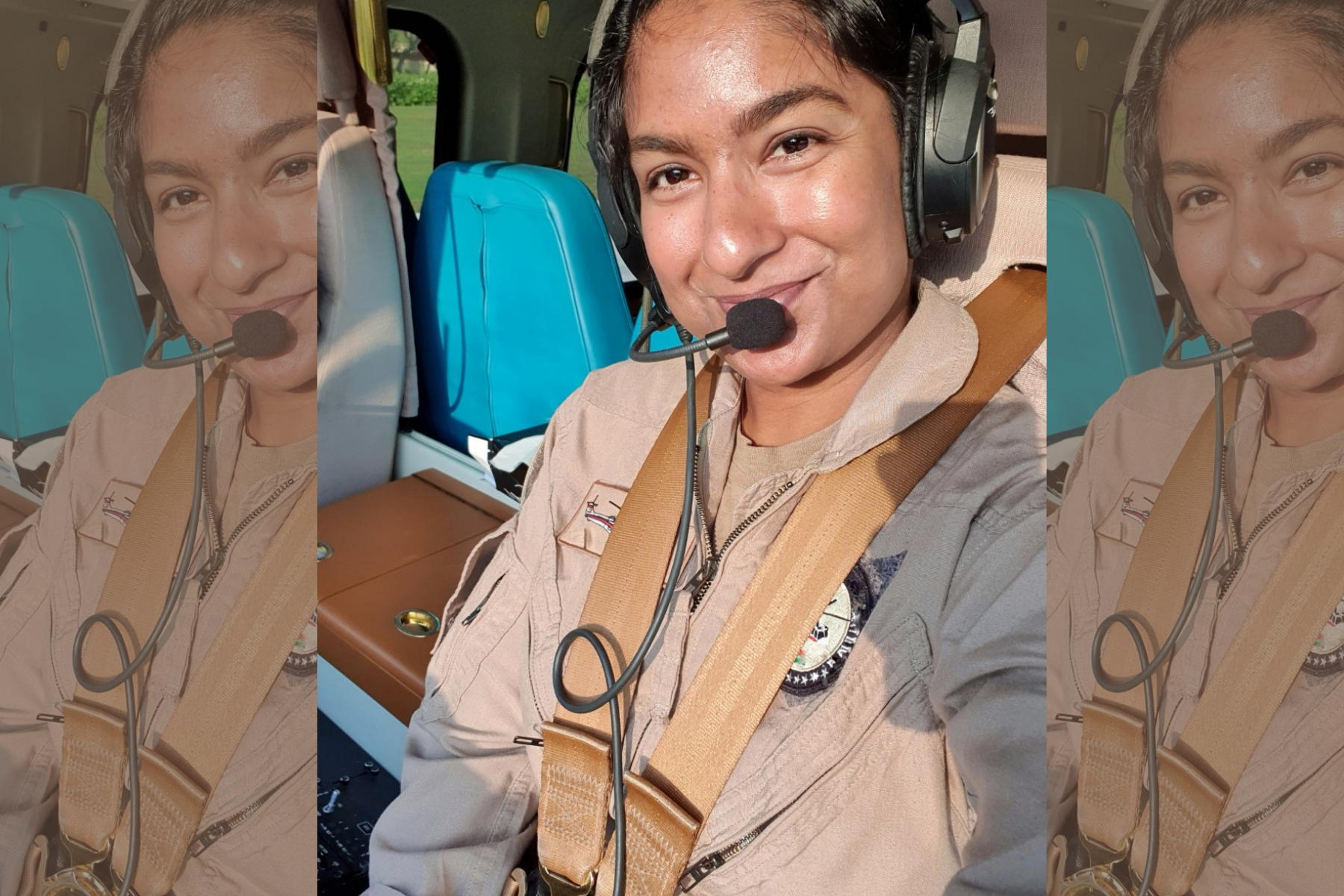 “Some…say ‘girls are not pilots’ but I do hope that I’ve done my part to change their perception and inspire them to get into the cockpit.” — Safia Hosein

Nothing is impossible if we put our minds to it. This is often what we are told during times of tribulation. Women of color have taken this phrase to new heights. Safia Hosein has taken this phrase literally and figuratively. Hosein is a pilot with over 20 years of experience from Trinidad and Tobago.

Her career has brought her from the Caribbean island to flying the UAE’s royal family.

“I grew up in a beautiful bucolic village that is somewhat famous for those plants. My parent’s house is located close to a savannah where the helicopters would land and I now know that the pilots used our house as a final approach marker as they would fly directly over it for the duration of the operation.”

Although the Caribbean is known for outdoor activities and water sports, Hosein was not an outdoorsy person. She preferred to stay inside and read books all day, yet whenever the helicopters flew over, she would run outside every single time.

“I’ve always been a daydreamer and would envision myself flying over our house but never in the back as a passenger but in the front on the controls.”

Hosein’s father loved aviation and was selected to join the Royal Air Force but declined the position because his mother could not live with the thought of him being sent to war. At the age of 16, Hosein made the decision to become a helicopter pilot.

Her favorite part of the job is the amazing view. “Watching the sunset or sunrise from the air, especially when the airwaves are quiet and there’s little chatter on the radios, is unbeatable.”

Even while flying in the UAE, Hosein says she has never been to the top of the Burj Khalifa, the tallest building in the world. She reminisces about watching a documentary on the Burj Al Arab being constructed as a child and is now amazed to have had the opportunity to fly past it.

“Never in a million years did I think one day I would land on it, but I did. When I worked in Trinidad I got to fly over my parents’ house, which felt like a full circle moment and loved that from the air the trees looked like spurts of broccoli.”

Hosein parents have been the most influential people in her life.

“Growing up, our house had one TV channel so there was very limited opportunity to see women who looked like me to model my life after. I myself was not aware there were female pilots in Trinidad and Tobago until I was sixteen years old. My parents, being the people closest to me, were the most influential.”

Hosein believes that women are still underrepresented in aviation even in 2022.

“I am a brown woman in aviation. That’s a double whammy in this industry. I’ve been on the receiving end of racism and sexism.”

Early in her career, there was a senior male pilot known for his tyranny. Back then bullying in the workplace was tolerated without repercussions. Hosein was only a first officer and this individual wielded significant power over her. Eventually, she had the courage to report him to management. The next day she walked into work, her company-issued locker had been vandalized. He kicked her locker till it broke in front of witnesses, yet no one reported him in fear of retaliation. Sexism was one of the main reasons Hosein left Trinidad. Yet in the Middle East, Hosein continued to experience sexism.

“I was once at an airport in Saudi Arabia and I met with the airport manager. He was delighted to meet me, even put my name in a book as I was the first female pilot who had landed there…he wanted his daughter to be a pilot as well.”

Yet, the next day Hosein was stopped by a male security guard when trying to get to the helicopter airside.

“He asked my male co-worker ‘Is she really necessary for the flight?’ The answer was ‘Yes, she’s the Captain.’ He would never have asked my male coworker that question. A few times after landing, I’ve had people who saw me step out of the cockpit ask if I fly as well.”

Just a few years ago a chief pilot threatened to penalize Hosein for being on sick leave. She was hospitalized after five life-saving surgeries and having received 11 pints of blood. Hosein questioned whether any pilots who had taken sick leave in the past year were subject to this rule.

“…I would file an official complaint citing discrimination, as I was the only female pilot and his made-up rules seemed specific only. I reminded him that he was not allowed to single me out and create his own policies. He quickly backed down and I was never penalized.”

Hosein wants women to learn from her experiences. She was silent and left Trinidad because of chauvinism. If the locker incident happened today, Hosein maintains she would have demanded an investigation.

“Nobody should ever be made to feel unsafe in the workplace. It is very easy for corporations to intimidate one person and while this may sound controversial, HR is not there to help you, they are in place to protect the company. Stand up for yourself but you need to document facts not feelings. Ensure you have a paper trail and respond with an email after each phone call detailing what was said.”

At the start of her career, people made inappropriate comments about her being a glorified taxi driver to which she would respond, “what’s wrong with being a taxi driver if it’s an honest day’s work?”

She continues to explain that people have a set mindset about women. They believe that one’s culture refines others to focus on a specific life path, such as going to university, getting married, finding a house and having children. While society tells us that single women with a successful careers have traded the opportunity to become a parent, womanhood does not necessarily mean motherhood. Hosein chose to not have children and she believes the decisions women make should be accepted without judgment.

“Success means different things to different people. Just because Nana and Nanny did it one way doesn’t mean I have to follow that path.”

Despite judgment from some members of the Indo Caribbean community,  Hosein gets messages from parents saying they want their daughter to be like her and travel the world. Her advice to girls and women is to never downplay yourself.

“I would make myself small to try to fit in because I was always different. But I worked really hard to achieve all that I did and I deserved all the opportunities that came my way. I wish I had backed myself more.”

Hosein’s last piece of advice to women chasing their dream is to do something you love without feeling like you’ve wasted your life. She explains that when women are ambitious, society may try to dissuade us. We must learn how to tune out others’ opinions. To be successful you have to spend time mastering your craft.

Hosein leaves us with one last thought.

“Sometimes you’ll have to disappoint people close to you who think your life should be different, and that’s ok. The only thing that should matter to them is your happiness and as long as you’re happy then you’re doing something right.”