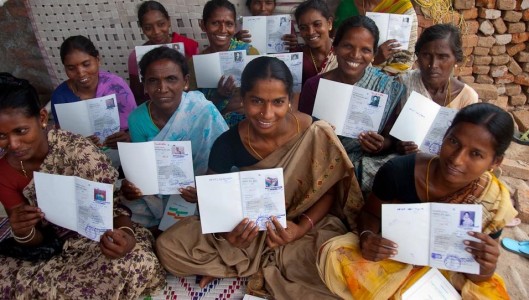 Swapna Dey has dozens of daughters. They come to see her every Sunday afternoon.

“The girls share everything with me,” Dey said, an energetic and petite middle-aged woman with an infectious smile. “Especially, they share the problems they face. I am a mother to them.”

Dey is an Anganwadi worker, part of an army of 1.3 million women who, since 1975, have been tasked with traveling to India’s poorest areas to provide help and guidance to pregnant women and new mothers. Now, under an innovative new program, called the Girls Project, more than 1,000 Anganwadi workers in West Bengal like Dey have a new mission: To stop child marriage, keep girls in school and help them understand their rights to land.

Under the program, Dey and her fellow Anganwadi workers help support groups of girls who meet regularly to learn about their right to attend school and acquire assets, without the fear of marrying before the age of 18. The girls also learn land-based livelihood skills to help them develop a garden that can boost nutrition and income, and give the girls the opportunity to prove their abilities.

At a recent meeting, as more than a dozen of Dey’s “daughters” gather in her office, a dark concrete building with a single room, dusty concrete floors and no glass in the window frames, a quiet 16-year-old girl with pale skin and almond eyes, asks the question that haunts every girl in the village.

“What do you do if your parents are trying to arrange your marriage?” Namita Roy asks. “How can you stop them?”

Then one suggests that Roy try to dissuade her parents using what she has learned in the girls’ group meetings: Early marriage is bad for girls and it is against the law. It can lead to early pregnancy, which can ruin the health of the girl and her future children.

Her hands nervously fidgeting with the trim of her green dupatta, Roy looks around the room at the 15 girls assembled, and explains, “I’ve tried to convince my father that he should wait until I’m 18, but I’m not sure he agrees.”

Roy’s father is no ogre. He loves his daughter deeply. Poverty limits his choices, as he’s told Roy. He must pay her groom’s parents a handsome dowry upon marriage, but by custom, the dowry can be waived or significantly reduced if the bride is very young. Roy’s father recognizes that the longer he waits, the more he may have to pay in dowry.

Roy’s mother died many years ago. Her father, a single parent with three young girls and little money, followed the custom for poor rural families: He married off the oldest daughter, 13 or 14 at the time; he sent his second oldest daughter, then 12, to become a domestic servant in Mumbai (more than 1,000 miles away); and he pulled the youngest, Roy, out of school and tasked her, at the age of 9, with daily house chores.

Roy explains her efforts to avoid child marriage thus far. She has, using the gardening skills she learned in the group, begun a kitchen garden. Using every available inch of space in her father’s small compound, she is doing what she can to contribute to the family. She has bottle gourds growing up onto the roof of their home and she has vine of beans growing up the shelter for the family’s animals. She also has pumpkins, squash and chili peppers growing at the edge of the family’s compound.

“When I harvested the first bottle gourd a few months ago,” Roy said, “I cooked it for him and told him this is my bottle gourd you are eating. He was impressed.”

Yet, Roy says she’s not sure he was convinced to delay her marriage.

Roy turns to Dey and asks her to visit her home and help persuade her father. Dey agrees to visit Roy’s father, but explains, “I can only push people so far. If I am too forceful, then I will ruin my relationship with the villagers, but I can try to advocate.”

Bulti Dutta, another girl from the Girls Project, confides with the group because she is facing similar pressure.

“If I can contribute to my family, even a little bit with selling the produce from my garden, then I can better negotiate with my parents,” Dutta said.

Such a discussion shows the painful and daunting challenges girls in rural India continue to face.

The majority of girls living in rural India marry by the time they turn 17. This has devastating consequences for the girls, who are left ill-prepared to support themselves and their families, and who often experience severe complications during pregnancy and child birth.

It also impacts India’s future. According to the Global Campaign for Education, if India enrolled one percent more girls in secondary school, its GDP would rise by $5.5 billion. In addition, rural women’s insecure land rights undermine their ability to use the land to its maximum effect, which leaves them unable to feed their families and climb out of poverty.

However, the discussion Dey and other Anganwadi workers are having with thousands of girls across this region shows the progress.

Just one year ago, many parents living in rural India, said they did not know about the government’s ban on child marriage, or the reasoning behind such an edict. And many girls said until they joined the program, they had no leverage or information to make their case with their families.

The program, designed and implemented by the government of West Bengal and Landesa, a land rights organization, has already succeeded in making parents think twice, Dey said. A study found that girls who participate in the program for one year are more likely to stay in school, marry later and have an asset in their own name. More than 40,000 girls are participating and the project will be expanded to reach more than one million girls over the next three years.

The promising project is now the subject of a documentary film, “After My Garden Grows,” by Academy Award winning director of “Pinki Smile,” Megan Mylan. The film released in India on Children’s Day, November 14.

As the girls leave her office, Dey points out their homes in the distance. The bottle gourd vines growing on their roofs, the bean plants covering animal shelters—they are all, she said, tangible expressions of her “daughters’” aspirations to one day own land, farm it, and use the proceeds to better themselves, their families and their community.
[divider]

About the Author: Ruma Chatterjee is a district project Coordinator in Cooch Behar, West Bengal, India for Landesa, a global development nonprofit that works to secure land rights for the world’s poor women and men.
[divider]

The Girls Project aims to improve girls’ social and economic status through education, and thereby reduce their many vulnerabilities in the short and long-term, such as lack of education and childhood marriage. The program also teaches practical skills like how to plant and tend a small garden on their family plot, which provides girls with the opportunity to feed their families or make extra money by selling produce at the market. This, in turn, makes the girls valuable in their own homes, and amazingly, helps convince parents to not marry their daughters early. Girls who participate are more likely to stay in school and marry later than those who do not.

In its pilot stage, the Girls Project reached about 40,000 girls in West Bengal, but funding was recently secured which will scale the program to reach 1.3 million girls across the state. You can see a slideshow of girls who have participated in the Girls Project and their stories here.