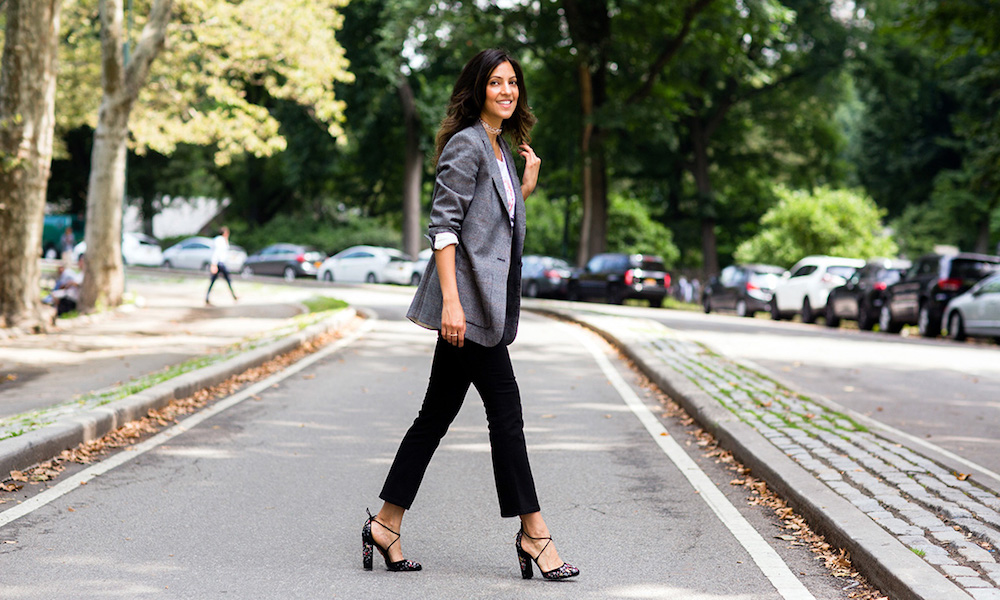 I got a text in the middle of a busy Emergency Department (ED) shift last Friday from my neighbor and friend. It read: 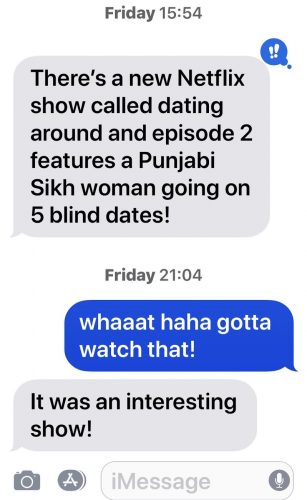 I chuckled to myself between taking care of a patient with congestive heart failure and a sobered up 26-year-old in remorseful tears because he couldn’t remember how he got to be in the ED with a cut on his head. My neighbor texted me this relevant information about “Dating Around” on Netflix because she is often regaled by my trials and tribulations of being a similarly single Punjabi Sikh woman in the city of cities, New York.

So I watched the episode, and I was left with a flurry of thoughts to organize. In sum, this episode brings up a common trope of South Asian culture regarding societal expectations with the “fiercely independent” Gurki Basra. Our “Dating Around” heroine is a 36-year-old Punjabi woman who isn’t going to serve some dude chai while her parents discuss a potential rishta. She is a divorced, successful, “older” (36-years-old is so young in the healthcare field, it’s weird to reconcile that with acceptable dating age) Punjabi woman navigating the New York City dating scene.

The more I ruminated on it, the more brainstorm bubbles kept popping up: Gurki-the-Punjabi-woman drinks alcohol on screen without demonstrating the requisite sharam. She doesn’t even carry the obligatory guilt that “nice” South Asian women don’t get tipsy or—God forbid—drunk in bars. She has a sizeable tattoo that’s religiously significant to her. She isn’t shy about not only being good at what she does but also doing it with an MBA. Basra unpacks her past marriage in a way that so many of us could eerily relate to: dating a culturally-appropriate choice for long enough means you’re supposed to fulfill the end goal of getting married, and there’s an incredible amount of pressure associated with that. She isn’t sorry about any of this, and why should she be? I imagine her as one of those “girls with tattoos who like getting in trouble” Ariana Grande croons about in “7 rings.”

Basra could be sorry if she wanted to heed the South Asian community’s copyrighted mantra: “log kya kahenge?!!!” Perhaps some will say she’s not desi enough on the show or too desi to be included on a Netflix dating show. She’s not packaged as the exotic contestant or the “Indian girl.” Part of this is intrinsic to the format of the show, where there is essentially no commentary by a third party or the characters within. She is allowed to identify herself however she chooses to, not held to be either a “coconut” or a fish-out-of-water on an “American” show. You’re allowed to identify Basra however you choose without the producer’s branding. Furthermore, the show does her a service by presenting men that span the spectrum of age, ethnicity, and occupation, thereby not limiting her choices to “acceptable” South Asian men. Basra isn’t treated any differently than the main characters in any of the other episodes.

You know what’s so great about her—spoiler alert!—choosing herself at the end? It’s incredibly empowering—not just for women everywhere, but especially for brown women. When she reflected on marrying someone out of cultural obligation, I felt a little shudder down my spine. Sure, her conventionally attractive Caucasian date became more and more distasteful every time he opened his mouth to bulldoze her as white men do, but she handled it with poise and grace that most hot-headed Punjabi women don’t have (not speaking from experience at all here…). I have the amazing fortune of parents who not only supported me but actually expected me to put my career and self-discovery first before prioritizing “settling down” and producing the requisite kids like good brown girls do. It’s weird in this day and in the #MeToo age to consider that a blessing, but the truth is, not everyone is that lucky. Basra breaks the mold by showing that it’s acceptable to be fulfilled on her own at 36, living her best life in a vibrant city. As she said to Refinery29 in a post-game interview:

Life moves on. You can be happy.

Of course, there is so much more to dissect about Basra on “Dating Around.” Is resorting to calling it a “cultural clash” during an argument with a Caucasian man so predictably close-minded of brown women? Did she defend arranged marriage or trash it? Is she a “picky” South Asian girl for choosing herself at the end? Can you imagine seeing this on a mainstream American media powerhouse platform 10 years ago? Regardless of your opinion on our heroine Gurki Basra, it’s important to recognize the progress of engaging in this dialogue. Who would have thought it would stem from a Netflix dating show?

Mannat is a hot-headed Punjabi girl from LA serving her exile in NYC to complete her training in medicine. When she's not wearing scrubs, you can find her photographing couples, going to the gym, or spending time with her one true love, Trader Joe. She can read and write Punjabi but speaks Spanish better. Her mom wants her to learn how to cook now but to find a man later because being a doctor is badass hard work. She graduated with her Bachelor's and Master's in Global Health from the University of Southern California and with her MD from St. George's University. You can follow her journey through residency on IG @doctormannat or see her work in photography on IG @mannatphoto.