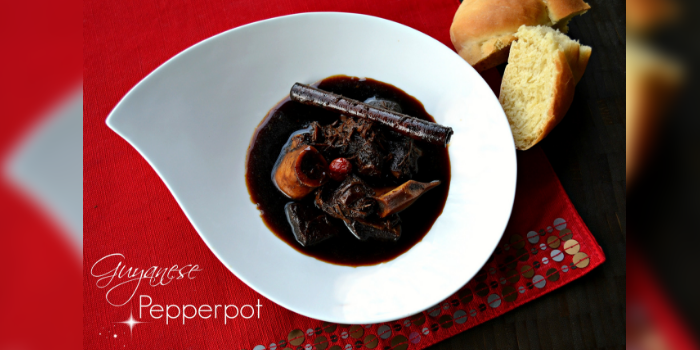 5 min read
Pepperpot is a unique type of stew that is made with cassareep and some type of red meat or pork (some people use chicken, but that seems to be the exception here). The stew is cooked with a handful of ingredients and tends to taste better over time. It is served alongside slices of plait bread and is typically enjoyed during the holiday time, but also made throughout the year. 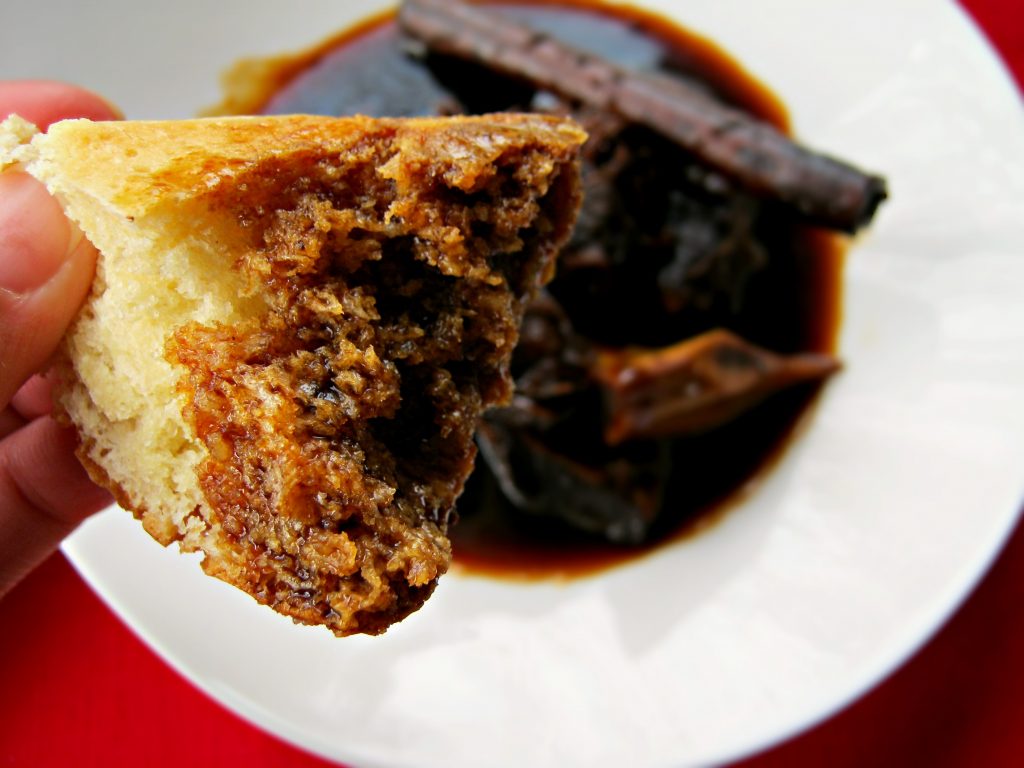 Pepperpot is Guyana’s national dish and one that was made popular by the indigenous people known as the Amerindians. It is believed that the Amerindians concocted this dish as a means to preserve their meats since they did not have refrigeration.

The stew itself is flavored with cinnamon, orange peel, clove, brown sugar, hot pepper, and the main ingredient- cassava cassareep. The cassareep is what allows for the meat to be preserved for weeks. My dad used to make a pot of this and just leave it out on the stove top for days. We would just reheat it when we were ready to sap it up with bread.

Cassareep is used widely in Guyanese cooking. It is a brown sauce made from extracting and boiling the juices from the cassava root. The cassava that is used to make cassareep is a specific kind; one that is bitter and has a certain age. Once the cassava is grated, it is placed in something to squeeze the juices out of it. The juices are then boiled with sugar to achieve a dark syrupy looking liquid.

The finished product smells like burnt sugar and has the consistency of molasses. Casareep contains preservative agents, which is why pepperpot can be left out on the stove top for days without spoiling and does not need to be refrigerated. The dark brown color that the cassareep gives the meat might not be so appealing to the eyes, but the flavor is really quite unique.

This is why cassareep is used in various ways in Guyanese cooking-the intricate flavor and color it adds to a dish is unmatched by anything else. I have never made cassareep and most people don’t. Generally, no one makes this at home, it is mostly store-bought and the reason is that making it is a very long process. As a home cook and someone who likes to experiment in the kitchen, I am telling you that some things are better off being bought and cassareep is one of them.

You can buy bottles of this stuff these days and in many different sizes. An 8-ounce bottle would run you about $5-$6 US and can be found at local West Indian stores. This is not something you would typically find in an ethnic aisle of a grocery store, but if you do, please feel free to let us know where by leaving a comment in the bottom section of this post. 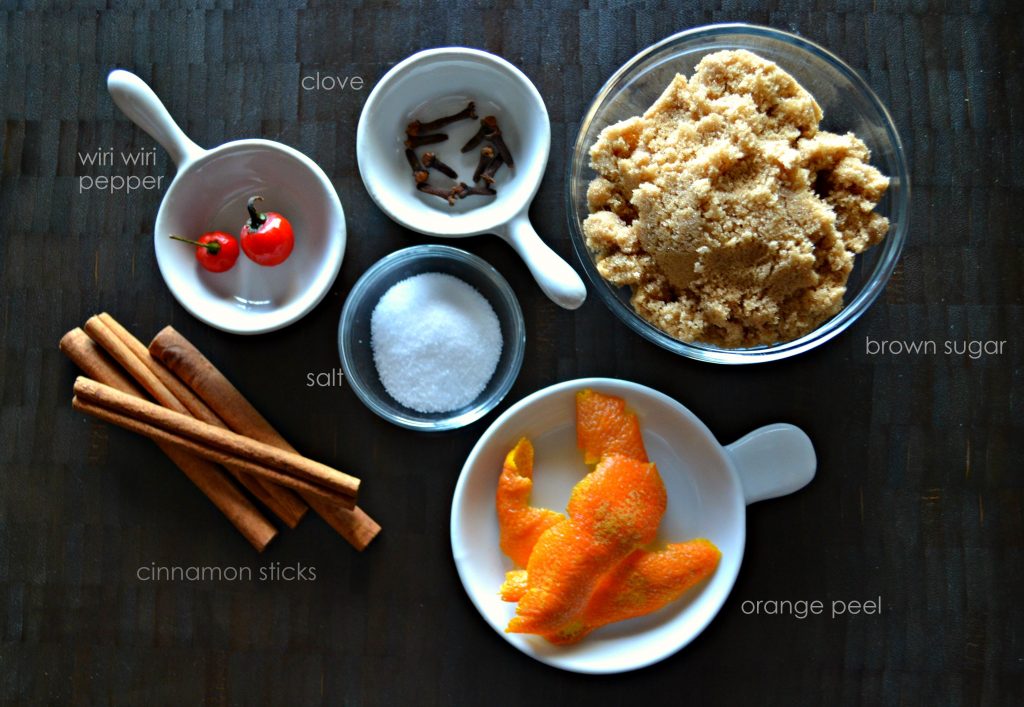 Prep your choice of meat. I used goat for this recipe. A variety of meats can be combined such as pork and beef. Many use oxtail, cow heel, pig feet traditionally. I do not eat beef or pork, so goat or lamb are usually my options.  After cleaning meat, pat dry. 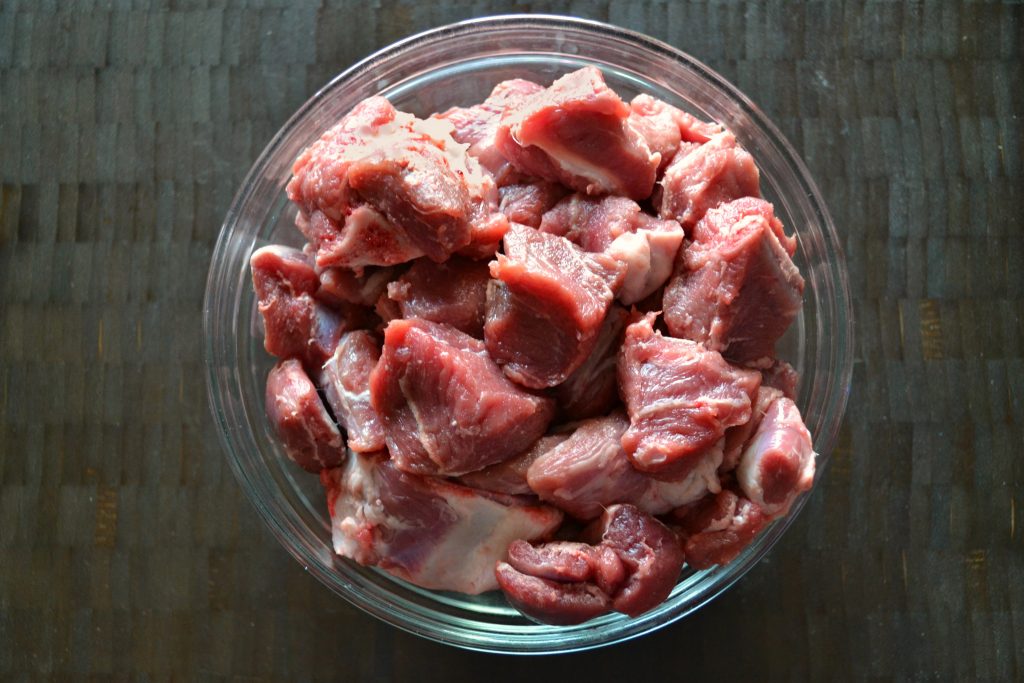 The meat needs to be lean and is therefore steamed to remove all fat. Add meat to a pot with enough water to come up the sides. In this step, we are going to “steam” the meat to remove any fat. 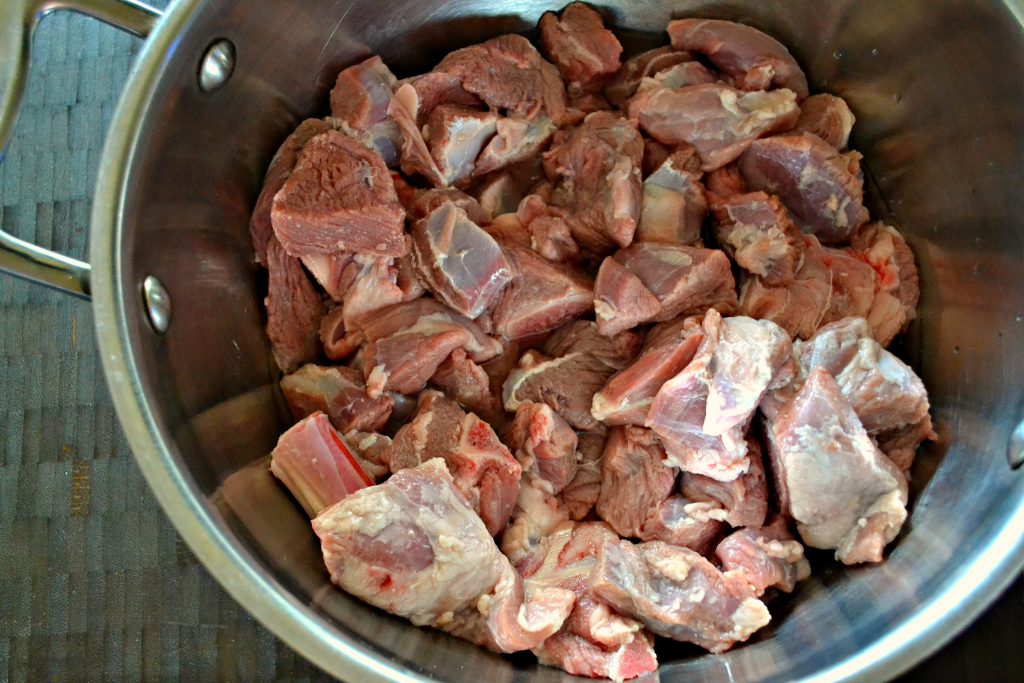 After meat has been steamed, discard of liquid in the pot. I prefer to do this step because I find the stew can have a rank taste if skipped. 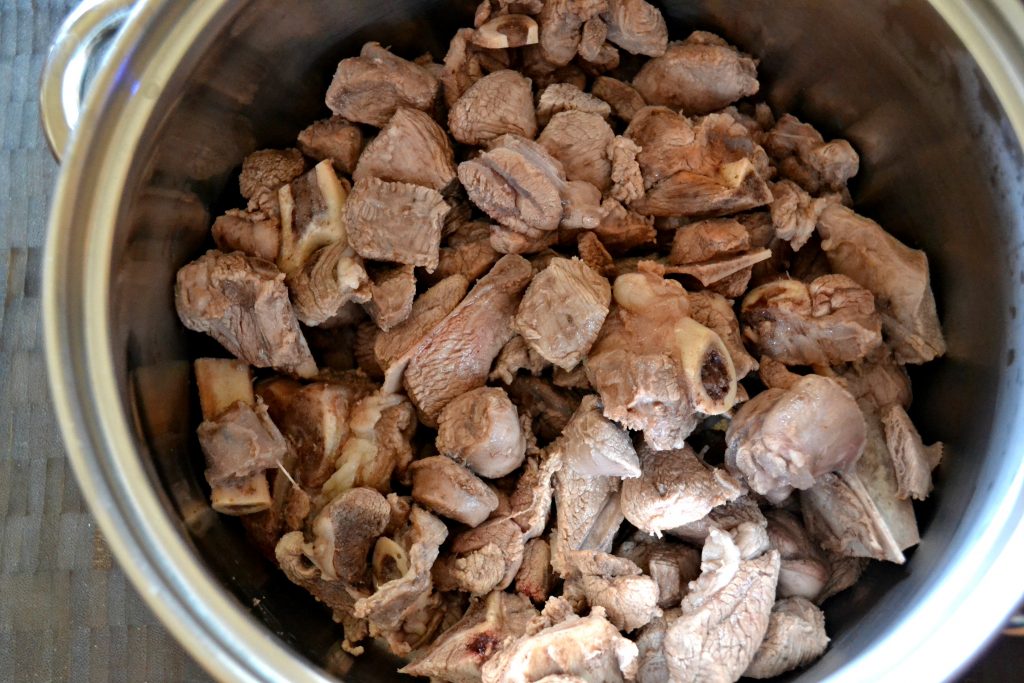 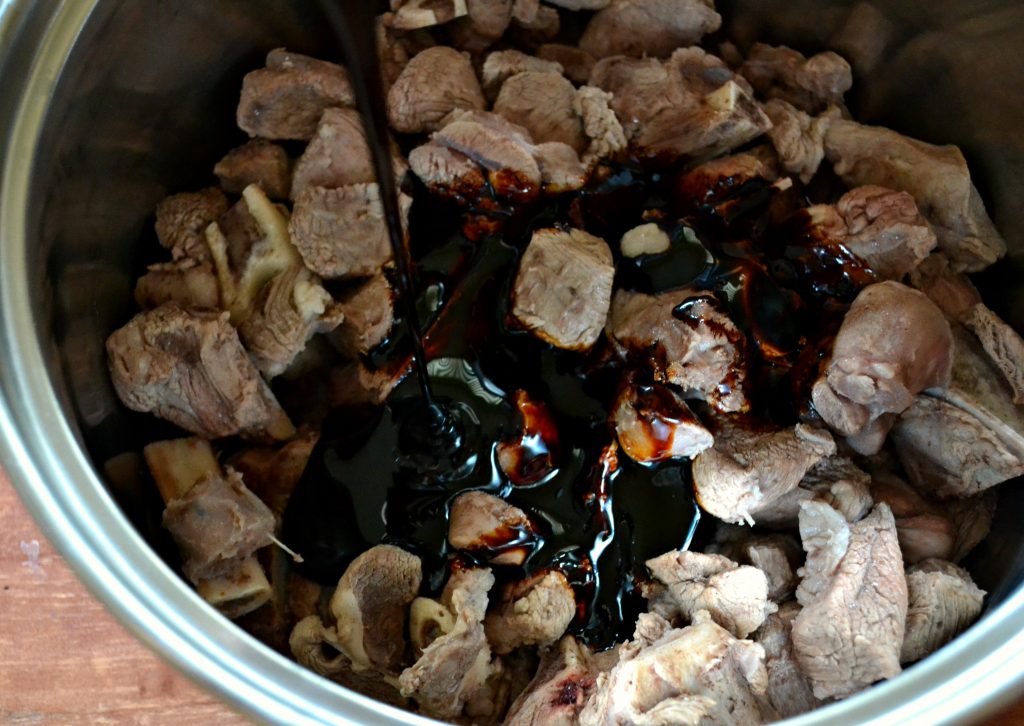 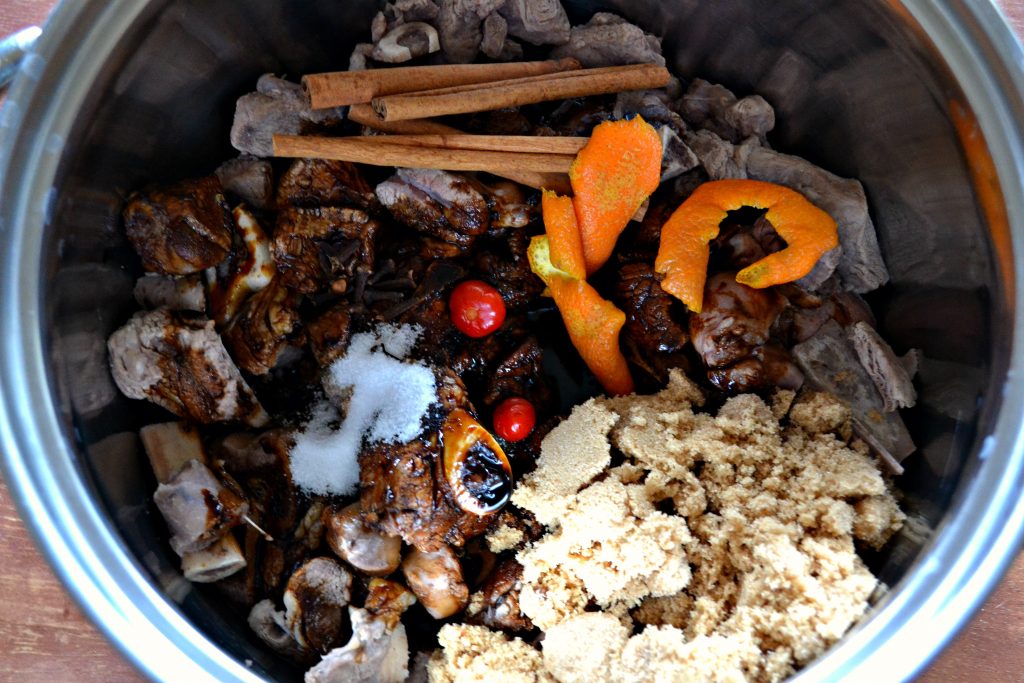 Add water and let this cook for a few hours until the liquid has reduced by 3/4. Meat should be tender. 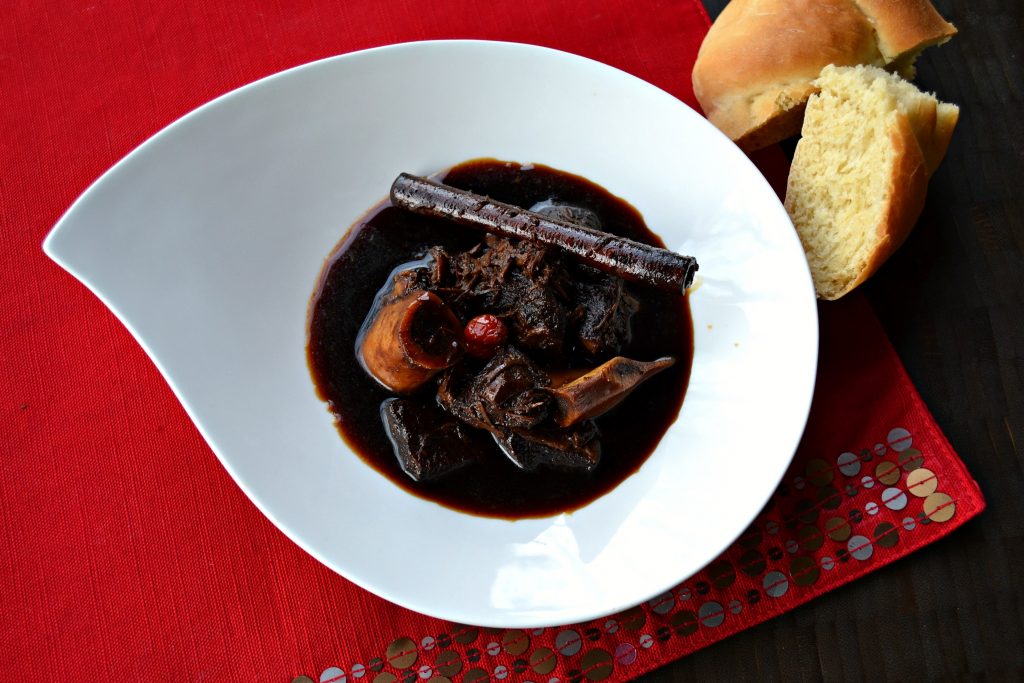 We enjoyed ours with homemade bread. 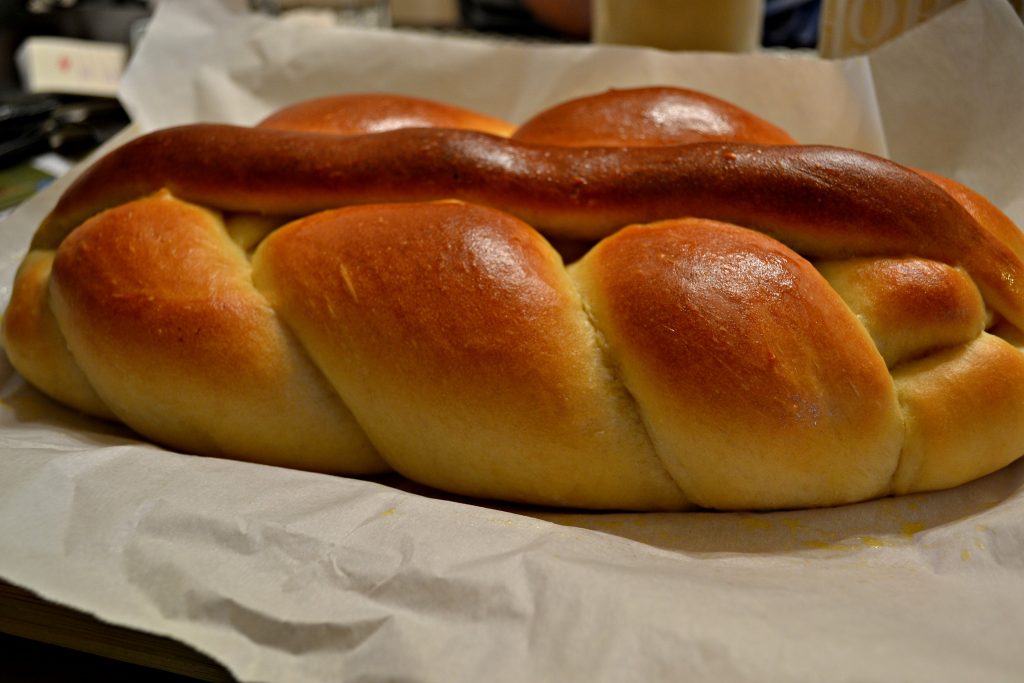 This is my dad’s pepperpot recipe, the best one I have tasted. Some people put onions, garlic and all sorts of other seasonings into their pepperpot. But to me, the more you add to this dish the less it becomes pepperpot. That being said, since there is a variety of ways to make this dish, don’t let anyone tell you that your family’s recipe is wrong. If you want onions and garlic, add it.

We base our tastes of the dish on the way we first enjoyed it. For me, this is how I have known pepperpot to taste because it is the way my father always made it. He adapted this recipe from his mother. They are from Berbice and the people of Guyana cook their food according to the region they are from.  Merry Christmas to all of you and no matter how you make your pepperpot, I hope you enjoy every last bit of it on Christmas morning!

1. Steam the meat for about 15 minutes so that all the fat can be removed. Once you have steamed the meat, remove any dangling pieces of fat. Discard the liquid in the pot.

2. In another large pot, add meat, cassareep, and all other ingredients. Add the water and boil until the meat is tender and until the broth has reduced by three-quarters, a few hours. My dad usually boils the meat until it falls off the bones, but some people like their pepperpot meat a bit more on the tough side. It’s all about preference.

3. Adjust salt to suit your tastes.

*Reminder: Pepperpot is best when made a couple days in advance.

HOW TO STEAM THE MEAT:

1. Place meat in a pot with enough water to cover just 1/4 way up the pot. Let meat simmer on low heat until the fat congeals and can be removed from each piece, about 15 minutes. Remember, you are not cooking the meat during this step, just heating the meat enough so the fat can be removed. This allows for a lean stew.

2. Pepperpot does not need to refrigerate and can be stored on the stove top. Flavor is best when made a few days ahead.