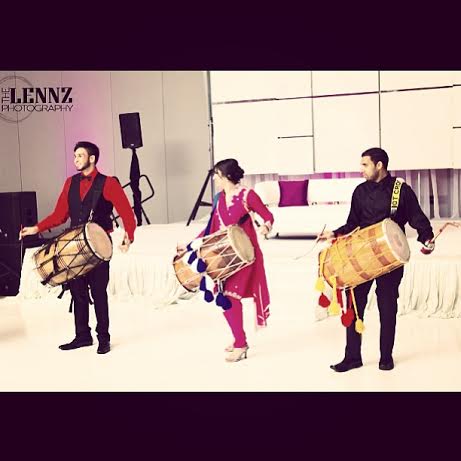 A typical desi wedding is not complete without a groom riding a horse, an assortment of food and sweets, ornate outfits, sparkling gold jewelry, elaborate mendhi designs, and aunties and uncles throwing money in the air with lots of singing/dancing. Most of all, dancing to the dhol (the traditional drum instrument of Punjab) during a desi wedding is a must, but how many times do you see a female dhol player? We know the first Punjabi dholi of the South – Hardeep Sandhu and she a lot to say with a big bang! So continue reading while doing the balle-balle.

How did you start playing the dhol?

I was 16-year-old when I started playing the dhol. After watching Dholi Mitch Hyare perform along RDB, I wanted to be just like him. My brother – Amar Sandhu – was then a DJ and needed a dhol player. He learned how to play the dhol the day he picked one up and since we did everything together, I asked him to teach me too. We went to gigs together and slowly after playing along to music at several parties and playing along other dholis, I learned better techniques and became more confident. Next thing you know, I was known as Katharnak Dholi – Texas’ first and only female dhol player.

What kind of reaction did you get from your parents, your siblings, your friends (desi/non desi) and elders in the desi community?

My parents were supportive for the most part. My mom has always been supportive and never discouraged me. My dad on the other hand, would freak out about how other people’s kids were doing so well academically and here his kids were all involved in music. He wasn’t very kind about it and of course did not like the fact that I was out late almost every weekend. I imagine every Punjabi father would be protective of his youngest daughter, but eventually he ended up adopting and would book gigs for me through his friends!

I always heard the ‘what will people think’ or the ‘you’re never going to get married’ or even the ‘dhol won’t pay your bills’ speeches, but it never stopped me. And look now, I’m getting married, my bills are paid and people think it’s awesome!

As for my siblings, my four older sisters Kawaldeep, Gurdish, Rupinder and Ramandeep, always encouraged me to follow my dreams and of course my brother, Amar, always supported me since he was my partner in crime. Without my siblings support, I don’t think I’d have ever made it this far.

During my senior year of high school, my friends found out  through my myspace.com account that I played dhol. Rumors spread around the entire school that I was famous. This led to the popular kids asking me to sit and eat lunch with them – weird. My desi friends were always cool about it. They always helped me get more gigs and encouraged me to keep playing dhol when I would doubt myself.

Believe it or not, the bebejis and bapujis love that I can play dhol. I get more blessings from them at gigs than any one else. They are truly proud of me, I can only imagine what goes on in their heads and if they are thinking about how things have evolved since their times.

What struggles have you faced while trying to get gigs?

People underestimate me because I’m a female. They doubt my abilities and sometimes they don’t book me just because of the fact that I am a woman. I have to show my website to them and really sell the fact that I can play just as well as a man. When I started, I would tell my brother not to tell them that I was a girl and to tell them he would send a dholi to their event. When I would arrive, people would stare me down and think that their event was doomed.

What are some often asked questions when people find out you play dhol?

Is the ‘dhol’ heavy? How did you learn to play? How long have you been playing? Don’t you get tired? Are you married?

What was one of your best experiences at an event?

I have a lot of amazing moments while playing dhol. One of the best experiences I had while playing dhol was in downtown New Orleans, Louisiana. We were at a wedding right in the middle of Canal Street. So many tourist and locals gathered around to watch the baraat (wedding). There were three of us playing the dhol. At one point we were all on top of a Hummer playing dhol to the music playing beneath us. I felt like a celebrity by the way people were making videos and taking pictures of us. It was so much fun and definitely a memory I’ll never forget.

What was one of your worst experiences or comments you have received in terms of being a female in the industry?

When I started playing, I attended a wedding along my brother. The groom’s father was so angry to see a female playing dhol that he came up to me and told me to stop playing immediately. I ignored him and continued to play, but he got kind of ugly about it so I stopped and my brother finished the gig alone. I was also booked for the reception in the evening for the same client. I was so upset and told the client he would have to pay me for both events, but I would not play in the evening. The groom apologized several times and I realized by not playing in the evening, I would let his father win. So I played dhol that night and smiled at the groom’s father the entire evening.

You either face your fears or you let them control you.

How important is it for daughters to pursue their hobbies/dreams in the South Asian entertainment industry?

I think it’s very important for desi parents to encourage their children, male or female, to follow their dreams. When you hold a child back due to what society will think or say, you are teaching that child that no matter what they do they will never be good enough. It’s impossible to make everyone happy – so you are setting your kids up to be unhappy.

How did you meet your fiancé and how does he feel about you having weekend gigs?

I met him through some mutual friends. We were friends for a long time before we were in a relationship. He is my best friend and my biggest supporter. He loves the fact that I play dhol and truly is my number one fan. I love him with all my heart and could not imagine my life without him. He’s such a great sport about everything. When people ask him at events if he’s a part of the dhol crew – he always smiles and answers, ‘Yea, I’m the official dhol carrier.’ It’s pretty funny how when we walk into my gigs and he’s carrying my dhol, everyone automatically assumes that he’s the dholi and the coordinators start talking to him instead of me. We just play along and then surprise everyone when I start playing.

How do your future in-laws feel about you playing dhol? Did your parents believe this would stop you from finding a suitable husband?

My in-laws surprisingly love that I can play dhol. They want me to do what makes me happy. I’m truly very blessed to have their support. I definitely always feared that whoever I marry would not approve of me playing dhol. My parents would always laugh and say, ‘are you always going to play dhol at other’s weddings or are you ever going to get married yourself?’ When my future in-laws came over to talk about my engagement, my dad clearly said, ‘our daughter doesn’t know how to cook and plays dhol.’ I guess that was his way of saying, ‘take it or leave it.’

What are some of the benefits of being one of the few women in the industry?

I get booked for female only events. As for club parties and public events, I’m considered over other dhol players because I’m a woman and it attracts more people to their event. There’s always a cute boy who wants to carry my dhol for me now and then – oh wait, that’s Manav, my fiancé.

Will you be playing at your own wedding?

Of course! Haha, well I’m sure the millions of dhol players I know will probably take over for me, but who knows, when I’m feeling the music, I might just bust out with my dhol!

What do you do to prepare for a gig? (i.e. preparing/tuning the dhol, what do you wear, hair, makeup, etc.)

I’m sure I have it a lot tougher than male dholis. I have to do my makeup, hair, wear an Indian suit, sometimes a parandi, churiyan. Basically, I have to doll up like I’m attending the party as a guest. It’s so much work! Then of course I have to make sure my dhol is tuned and ready to go. If it’s an out-of-town event, then I have to pack and make sure my dhol is secure and packed properly.

What are some of the struggles you face in your everyday life for being “the dholi girl”?

I get myself into come crazy situations sometimes. Once, I played at a sangeet on a Thursday evening. The next morning I had to go to court and when I went through the security line, I had to put my clutch through the x-ray machine. When I walked through the metal detector the officer was looking at me really funny and he pulled me aside. He said that ‘I look like a really nice girl,’ but he wanted to know why I had a wrench in my clutch. He also asked ‘if I was planning to take a judge out with it?’

All photos are provided by Hardeep Sandhu.