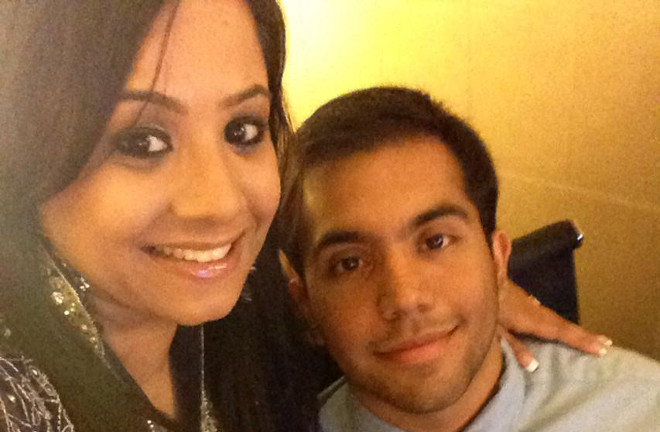 In honor of the upcoming Raksha Bandhan festival, I want to share a story about my brother, Herman Chadha.

He is lovingly referred to as “Manu” at home, who is the baby of the family as he is 13 years younger than me. He is also the only boy in the family, and the youngest of three sisters.  Manu was born on New Year’s Eve in 1993 and he immediately became the Krishna in a family filled with girls.

Being the oldest, I helped my parents take care of my brother. I remember giving him his bottle of milk, changing his diaper and singing him to sleep.  I remember his fascination with Mighty Morphin Power Rangers and trying karate moves on his sisters.  I remember all of it, but what I sometimes can not remember is the moment my little brother became my older brother.

As Manu became older I saw a change in him.  He was not like typical teenagers who are more concerned with their friends than family.  Manu was becoming a protective brother, who was yearning to spend time with his parents and his sisters.  Conversations with my brother started turning into these philosophical debates on topics that varied from health and politics to spirituality and religion.

The little boy that I once carried in my arms was now starting to tower over me in height.  Manu’s little baby face had been replaced by a lightly trimmed beard. Gone was the brother that would easily ask me to buy him a toy, and in came the brother that now tells his sisters that he does not need anything ; that a simple card would do in place of a birthday present.  He had changed, and thankfully the changes were all positive.

My brother had matured right in front of my eyes, but it was such a gradual growth. A growth that brought tears to my eyes, which is when I realized my wish of wanting an older brother had finally come true – through my baby brother.

I was going through some issues that I was having difficulty dealing with.  I cried, I cried a lot, and  I remember the day my brother gave me this hug that made me feel like I was protected.  I will always remember that moment because he has never let me down when it came to being my support, my protector and my sanity.

My parents did a great job in raising Manu, and at 20-years-old, he is a pre-med student.  He respects his parents, he loves his sisters and is a true example of how a young man should be.  My brother is my best friend, a blessing, and although I am much older than him, I can never compare to what he has become, what his heart is or what his intellect is. I am extremely proud of him, and I pray that he continues to follow the right path and that happiness, success and good health are always a part of him in every step.

My brother and I are an inseparable team, and share a  bond that is unbreakable.

Rakhi Chadha is the author of the upcoming motivational book titled, “This Is Your Awakening…Restart Your Life! ,” a high school English teacher, community event organizer and aspiring entrepreneur. She is listed as a top Desi Influencer, was awarded ”A Teacher That Made The Most Difference” award and has received citations for community work from the State of New Jersey. Her passion includes writing, education, social issues, traveling, community events and basketball! A lifelong New Jersey resident shortly moving to Chicago. Follow her work on Facebook and Twitter.