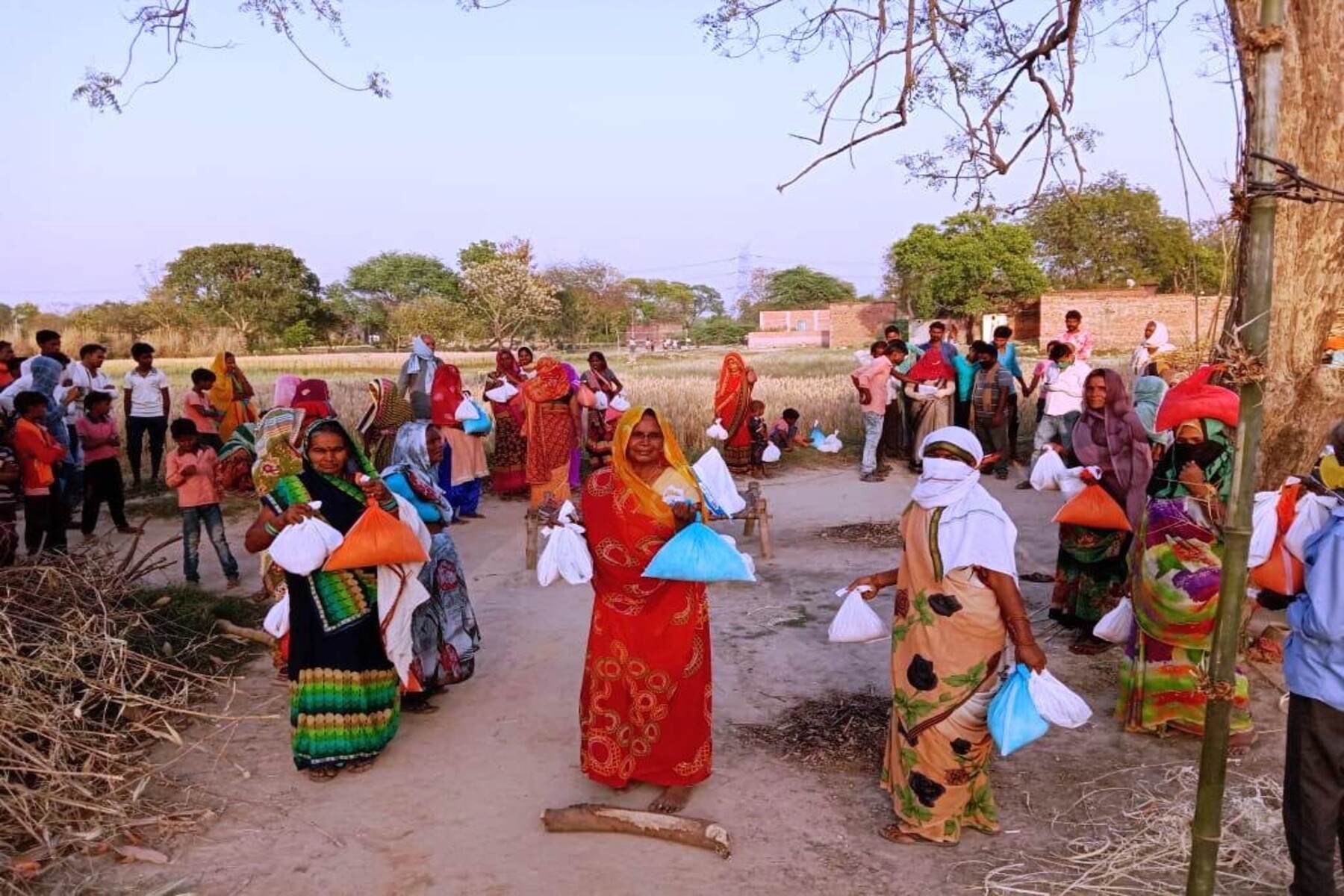 In this interview, we speak with Father Anand who is the coordinator of Sajha Sanskriti Manch (SSM), an alliance of various social organisations and activists of Varanasi. Jan Vikas Samiti is a member of SSM. Jan Vikas Samiti has sustained relief work in Varanasi, India since the COVID-19 lockdown. Varanasi is one of the holiest cities for Hindus and Father Anand is leading a campaign on communal harmony by spreading the message of peace.

Father Anand indulges himself in the Hindu practice of “Seva” or “selfless service.” Jan Vikas Samiti is refuting false claims and is providing strength and relief materials to the Muslim community that is being targeted as the group responsible for the spread of COVID-19.

As Ramadan just recently ended and I want to go forth with my intentions, I hope to make this my continued offering in the spirit of giving and shared values so it will inspire others to support this noble cause. A Christian man in the holiest of seven sacred cities in Hinduism is helping his Muslim brothers and sisters in humanity.

*This interview has been edited for length and clarity. Some names have been changed.

Please describe the efforts of this group. What have they been doing and how many people have been served?

The group has an informal coordination group which meets time to time for planning, identifying, enlisting and shortlisting the beneficiaries. From March 25 to April 23, 9,383 families and 45,034 people have been provided aid. We are providing kits that contain wheat flour, rice, lentils, cooking oil, salt, biscuits, bun, masks and soap. Due to Ramadan we have started a new program of reaching provisions for breaking the fast to the poorest Muslims who live in the slums. We have been witnessing that the Muslim community is being sidelined by many NGOs and also Government agencies. There is an atmosphere of Islamophobia and animosity towards the Muslim community.

What are the Interfaith aspects of the relief work?

Volunteers who are involved in packing, loading, and distribution belong to Hindu, Muslim and Christian communities. “Corona Relief Force in Varanasi” is an alliance of 17 social, cultural and educational organizations. The relief was reached to people of Hindu, Muslim and Christian faiths. We have a continued focus on Hindus and Muslims living in the slums in the city and in the hamlets of nomadic tribes, migrant and daily labourers and people of Dalit communities living in the villages.

Were there any specific incidents of discrimination?

I would like to narrate a real incident that happened two days ago. *Farida, is a volunteer belonging to *ASI, a group that has been working for the rights of teenage girls and against domestic violence. Fahida, who lives in Varanasi city, was asked by ASI office bearers to move to one of the villages to assist Savita*who coordinates relief services in four villages around her village. Farida was accommodated in Savita’s home soRamvilas, Savita’s father-in-law, was upset that a Muslim has come into his house.

He accused Savita of giving shelter to someone who is the cause of the Coronavirus in the country. According to him, Coronavirus is a weapon being used by Muslims to destroy India. TV news, social media and print media had influenced him so much that he considered every Muslim to be an enemy of India and so he managed to provoke the neighbours and other people of the village in order to get their support.

A large number of people gathered in front of Ramvilas’ house, asking Sarita to send away Farida back to Varanasi city.  If not, she would be beaten and chased. Sarita and her husband pleaded for the protection of their guests but her husband was manhandled by his father Ramvilas. The incident has sent shocking waves to most of us who are working against religious polarization in the communities.

It is true that in the midst of the Corona pandemic, Islamophobia is on the rise. There are many Hindu youth who are observing our work, some of them lend a helping hand yet have cautioned us that these relief kits should not be given to “those who are the cause of Corona spread.”’ It is evident that the hot coal of xenophobia and Islamophobia is being fanned by vested interests in the media. We hope and pray that it does not turn into blaze of fire.

Is there also government relief aid? If so, is it truly reaching those who are in most need?

Government aid is given through Public Distribution Shops known as ration shops but this only reaches the ration card holders. In this part of India, corruption based on selfishness and greed has created a situation that many of the poor and needy do not have ration cards but the rich and affluent who are able to bribe the PDS in charge are in possession of them. Although there is an order that all people, even those who do not have cards, be given ration, this is not taking place. These people are being given cooked food distributed through community kitchens managed by the police stations. Only those who live in the vicinity of the police stations are benefitting. Therefore our attempt has been to identify people without ration cards in order to provide them with ration.

Since you and your colleagues were quite vociferous in advocacy against CAA, what is the status of this advocacy during COVID-19. What are the plans for after lockdown?

Yes, it’s true that we fought against CAA and NRC. Now we are not sure of the Government’s stand. It’s true that indirectly what the Government wanted was to push the minority community out of their homes and be in detention centres. COVID-19 has pushed the Government to ask every citizen to stay indoors. We are not sure what is going to happen. We will continue to fight polarization and discrimination in the name of religion.

Since Varanasi is the holiest Hindu city in India, what is it like for a Christian minister to do humanitarian work in Varanasi?

The identity of Christian missionaries in Varanasi has been a rather good one. We have always been part and parcel of the city. Although a minuscule community, Christians have been prominent in promoting a composite culture through their educational institutes, media and cultural centres. The Christian community has its own interfaith dialogue centre which is well respected. In Varanasi, the Christian ministers have not faced any major opposition. The civil society, the elites, along with the media acknowledge the good humanitarian work done by Christians.

The destruction by Hindu mobs of Babri Masjid was one of the most frightening things you have read about. Is it true that the Gyanvapi mosque in Varanasi is the next in line for demolition by Hindu nationalists?

On the 8th of December, 1992, two days after the demolition of Babri Masjid in Ayodhya, the city of Varanasi witnessed violence. There was looting and killing in Lohta, on a Muslim weaver community. I was involved in a reconciliation process of the warring Hindu-Muslim communities of Lohata, and it took months to bring together both groups—but we succeeded. However, the situation in Gyanvapi is different. There is something brewing underneath; there is tension. It’s not clear what it will lead to. I don’t have the courage to articulate our fears.

How is the relief work being funded? Do you need further support?

The relief work is being carried out with the support of generous people in Varanasi and around. Initially, some Christian institutions supported us with materials and funds. Some of our organisations put intime, energy and resources like vehicles, buildings and personnel. Later, some of the students and ex-students of the Universities in Varanasi used social media platforms to highlight the needs. A lot of support came through these appeals. We have not received any funding from any funding agency in India or abroad. Only a few Indian missionary friends working abroad have sent contributions. Many of my family members, too, provided generous support.

What is your message to anyone reading this interview?

As the lockdown may continue perhaps until mid-July, we need more funds. We have received around 1.7 million rupees, which is not enough. It’s exhausting but we are hoping more people will support us. We appeal to all who can afford to support, kindly give generously to this noble cause.

What gives you hope? What continues to inspire you and the work you’re doing?

Varanasi is a city of spirituality. My hope is in this basic spirituality of solidarity and kindness.

What inspires me, personally, is my understanding of religion. Religion for me is religare, which, in Latin means to bind the human with the divine, and human to human. Goswami Tulsi Das has given the best definition of religion or dharm “par hit saris dharam nahi bhai, par pida sam nahin adhami,” which means “There is no greater religion than kindness to others.” Inflicting the other with pain is the worst irreligious act.

Jan Vikas Samiti is registered to receive foreign donations. US donors can support Jan Vikas Samiti by making a tax-exempt donation to ICA, selecting Jan Vikas,  or you can contribute directly to their efforts using the information below: