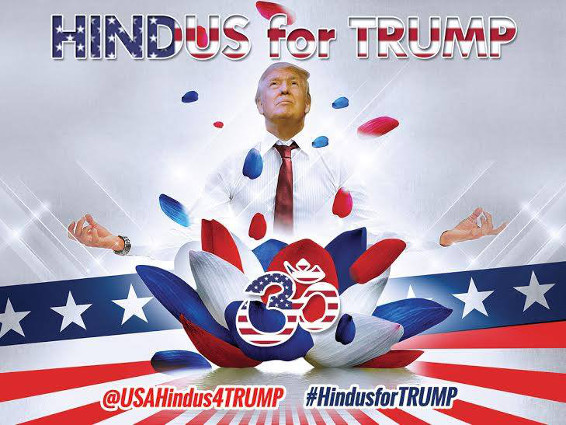 Today, Hindus for Trump created a graphic with Donald Trump emerging from a lotus flower with the Om symbol underneath.

Hindus For Trump’s leaders share Trump’s ideas about terrorism. Their blog also references the Indian American Intellectuals Forum endorsing his candidacy. IAIF was founded by the late Narain Kataria “[who] spent much of his retired years warning Americans about the dangers of Islamization and highlighting the plight of Hindus under Islamic rule in Pakistan and Bangladesh.”

Hindus For Trump president A.D. Amar, a professor at Seton Hall University, is also behind Indian Americans for Trump 2016—a registered PAC. Amar said Trump’s policies on immigration and economic plans are also reasons for Indian-Americans to support his candidacy.

Further support for Trump by Indian-Americans can be found in the Twitter account Indians For Trump (not known to be affiliated with Indian Americans for Trump 2016). @Indians4Trump retweets news outlets and criticizes anyone critical of Trump.

.@PatrickBuchanan: “Everybody knows that David Duke has got nothing in common with @realDonaldTrump." #Hannity pic.twitter.com/KRAaNNhywU

.@KatrinaPierson: @realDonaldTrump is the only candidate that’s personally invested in success or failure of U.S. pic.twitter.com/YDknaS0pxG

Trump should never again attend Megyn's debate. She is an ASS, no doubt https://t.co/0Gz34446JR

.@foxnews @BretBaier @megynkelly Chris. This is not a debate. This is gang up on @realDonaldTrump night. #ShameOnYou pic.twitter.com/rfMBzStrXO

This isn't an election, it's a movement! The people are ready for a true leader in Washington! #Trump2016 pic.twitter.com/QZTf2ydhtN

This isn’t an election, it’s a movement! The people are ready for a true leader in Washington! #Trump2016 pic.twitter.com/QZTf2ydhtN

The first formal Indian-American Republican organization was formed in November 2015. The Hindu Republican Coalition, led by Shalabh “Shalli” Kuma,r is supported by high-profile Republicans including former House speaker Newt Gingrich. The Coalition has also mentioned terrorism concerns as a reason for Hindus to support Republican candidates.

According to The Washington Times, Kumar is donating $2 million to Republican candidates in the 2016 election. The group is hoping to encourage more Hindus to run for office as the two most famous Indian-Americans politicians, South Carolina Gov. Nikki Haley and Louisiana Gov. Bobby Jindal, are Christian.

Though Democrats have had a strong hold on the Indian-American community in the past, Trump’s growing support nationwide indicates these groups, and possibly others, will become more powerful as election season continues.