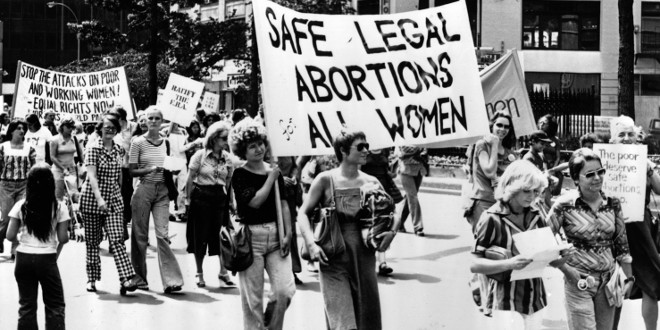 Last week, Republicans in the House passed an anti-abortion bill banning federal funding for abortions. The passage of the bill, by 242-179 votes, coincided with the annual March For Life, held by anti-choice activists on the anniversary of the Supreme Court’s decision in Roe v.Wade.

The bill denies women coverage for abortions through Medicaid, denies tax credits for employers paying for abortion coverage under the Affordable Care Act, and makes it difficult for women to buy private insurance plans that provide coverage for abortions. A statement issued by the White House last Thursday said that if the bill passes in the Senate, President Barack Obama will veto it.

House Republicans originally intended to pass the “Pain Capable Unborn Child Protection Act,” which would have banned abortions after 20 weeks of pregnancy. Many anti-choice advocates assumed this bill would pass, but it created a rift between the Republicans.

The House passed a similar bill back in 2013. A moderate group of House Republicans consisting mostly of women halted the passage of the bill last Wednesday. This group of Republicans, led by U.S. Rep. Renee Ellmers (R-N.C.) protested against a provision in the bill that would have provided rape victims an exception only if they report the rape to authorities. This deep opposition to the bill prevented House Republicans from passing the bill and replacing it with a bill banning federal funding for abortions.

Although the bill banning abortion 20 weeks after pregnancy did not pass on the federal level, some lawmakers are afraid that similar legislation will advance in state legislatures. According to the Guttmacher Institute, 42 states have some type of restrictions on abortions after a certain point into the pregnancy.

Currently, 10 states ban abortions after 20 weeks of pregnancy. States have the authority to pass such restrictions under the Supreme Court’s decision made in Planned Parenthood of Southeastern Pennsylvania v. Casey. Unlike the moderate Republicans in the House, moderate Republicans in conservative states will have a tougher time halting the passage of such extreme measures.

After House Republicans succeeded in passing the bill banning federal funding for abortions, Republicans introduced three separate bills restricting abortion. U.S. Rep. Jeff Duncan (R-S.C.) and 10 other Republican congressmen introduced the mandatory ultrasound bill, which would require women seeking an abortion to obtain an ultrasound and to review it before consenting to abortion. Similar measures have been passed in many states, but were met with deep opposition.

Another bill introduced on Thursday bans schools that have an abortion provider on campus from accessing federal education funds. The third bill requires states to report Medicaid payments made to abortion providers.

[divider]
Rishika is in her last year of law school. She is a self-proclaimed coffee addict, foodie, and a news junkie. She has a deep love for politics, culture, religion, tackling misogyny, and sociology. When she’s not busy reading or drinking coffee, she enjoys watching horrible reality, and traveling.