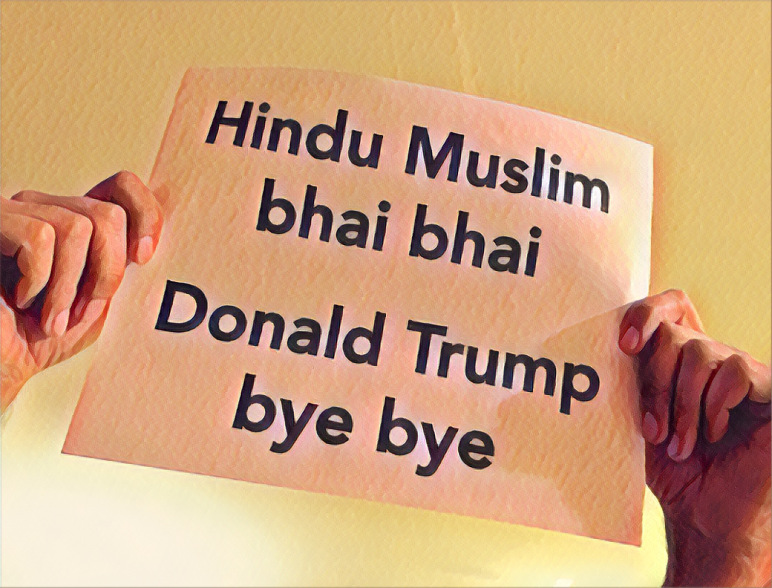 It is no secret that since the attack on the Twin Towers on September 11, 2001, Muslims and those perceived to be Muslims have been systematically targeted in America. Brown people of various religious backgrounds, nationalities, and ethnicities have faced considerable bigotry and discrimination throughout the past 16 years.

Those who supposedly “look Muslim” have been dubbed “a threat to national security.” As outlined in South Asian Americans Leading Together’s (SAALT) “Acts of Hate Database,” South Asian, Sikh, Muslim, and Arab Americans have been the targets of numerous hate crimes, as well as employment discrimination, bullying, harassment, and profiling.

Additionally, places of worship have been vandalized and attacked, including the tragic shooting of the Sikh gurdwara in Oak Creek, Wisconsin and the numerous alleged hate crimes in the Muslim community that have followed (SAALT, 2017). Unfortunately, the existing hostility towards brown folks has been exacerbated by Donald Trump’s 2016 presidential campaign as well as his subsequent victory in the presidential election.

Trump’s platform has been centered around “Making America Great Again” by targeting individuals from nearly every marginalized demographic. With regards to Islamophobia, Trump has perpetuated harmful biases against Muslims and most recently implemented an executive order imposing a travel ban on individuals from select Muslim-majority countries, which as of today (thankfully) has been rejected by the 9th US Circuit Court of Appeals.

While this news of his executive order was truly shocking and disturbing for many concerned Americans, the reality is that the “Muslim Ban” has unique implications, not just for Muslims from the countries listed in the executive order, but for all of us with brown skin.

Given the tense socio-political climate and pervasiveness of Islamophobia, it is imperative that non-Muslim Brown folks examine the impact that systemic bias against Muslims has on them.  This is especially important because many Hindu Americans mistakenly believe that they are immune to anti-Muslim and anti-immigrant sentiments since Trump has expressed his “affinity” for Indians.

Though he campaigned fervently among Indians, stated that he “loves India,” emphasized that “the U.S. and India will be great friends,” and even went as far as to make a Hindi campaign ad “Ab ki baar, Trump sarkaar,” (Translation: This time, a Trump government), Hindu-Americans should not let these false claims of allyship fool them. Trump’s focus on Indians as a voting bloc is purely political. During election season, he recognized that since Indians are among the wealthiest of all minority groups in America, class privilege would influence some affluent Indians’ decisions to vote for him.

The second reason, even more dangerous than the first, is that he is well aware of the historical tension between Hindus and Muslims in South Asia, and has chosen to exploit that to further his anti-Muslim agenda. Beyond encouraging Hindu-Americans to align themselves with him, he has also gone to great lengths to foster a relationship with Indian Prime Minister Narendra Modi, an ardent Hindu nationalist who shares Trump’s Islamophobic views.

In a nutshell, the strategy that Trump and other conservatives, have used is “divide and conquer.” By pitting minority groups against one another, they attempt to thwart marginalized folks’ attempts to form alliances which would threaten those in power. In this case, by favoring Hindu-Americans and making his disdain for Muslims very clear, Trump is fueling the deeply-entrenched wedge between the two communities.

It is up to non-Muslim brown folks to stand in solidarity with our Muslim brothers and sisters during this time. At a basic human level, it is crucial that we collectively fight injustice and advocate for those who are being targeted. As individuals who are from minority backgrounds ourselves, we must use our voices to stand up against the hate and systemic oppression impacting Muslims.

Additionally, we must recognize anti-Muslim sentiments within our own communities and actively combat them. Stemming from the era of British colonization and ultimately the 1947 partition of the Indian subcontinent into Hindu-majority India and Muslim-majority Pakistan, negative perceptions of Muslims remain prevalent among many Hindus. To prevent individuals like Trump from furthering these divisions and capitalizing on the animosity between both groups, it is up to us to speak up against harmful Muslim stereotypes and hateful rhetoric among fellow Hindu Americans.

It is also vital that we remain cognizant of the ways in which Islamophobia affects not just brown Muslims, but brown people of other faiths as well. Though Islamophobia is defined as “dislike or prejudice against Islam of Muslims, especially as a political force,” it is necessary to recognize its racist component as well. Beyond just the fear or dislike of Islam, there is a fear of anyone that is brown-skinned and “looks like” they could be affiliated with Islam. Though Trump’s “Muslim ban” targeted individuals from Iran, Iraq, Syria, Yemen, Libya, Somalia, and Sudan, the truth is that all brown folks face the risk of racial profiling and violence.

A bigot will not be able to distinguish between a Libyan-Muslim, Iraqi-Christian, and Indian-Hindu. At the end of the day, we are all seen as a threat due to the color of our skin and supposed religious affiliation.

For instance, take the recent case of Aravinda Pillalamarri, an Indian-American woman in Maryland, was stopped last month while walking in her neighborhood and questioned about her immigration status.

Despite the fact that she has lived in America for nearly all of her life, and her parents moved here when she was a baby, officers detained her, asked her if she was in the country illegally, and then asked why she was not carrying some form of identification. They eventually let her go, but the entire ordeal should not have happened in the first place — it was a clear violation of her civil rights.

As tragic as this incident was, it serves as a reminder that despite Trump’s claims of favoring Indians, non-Muslim brown folks continue to bear the effects of anti-Muslim and anti-immigrant sentiments.

All in all, it is essential that Hindu-Americans recognize both their role when it comes to advocating for Muslims, as well as the ways in which Islamophobia impacts them. We must not only work towards combating the prejudice against Muslims in our own communities, but we must also realize that, though we are not Muslim, we are a part of the greater struggle that Muslims face.

To dismantle systemic oppression and create a society which champions equity, justice, and love for individuals across all backgrounds, we must overcome divisions and demonstrate genuine allyship. It is imperative that we are not afraid to speak up and use our voices to achieve justice for all marginalized folks.

As Desmond Tutu once said, “If you remain neutral in situations of injustice, you have chosen the side of the oppressor.”

I encourage fellow non-Muslim brown folks to take on Tutu’s challenge and stand in solidarity with our Muslim brothers and sisters.

Natasha Sharma, one of the faces of the “Dark is Beautiful” campaign, is a graduate student at Washington University’s Brown School of Social Work. She is specializing in “Cross-Cultural Social Work,” with a focus on immigrant, refugee, and minority communities. Natasha hopes to eventually pursue a career in the field of ethnographic research and human rights.