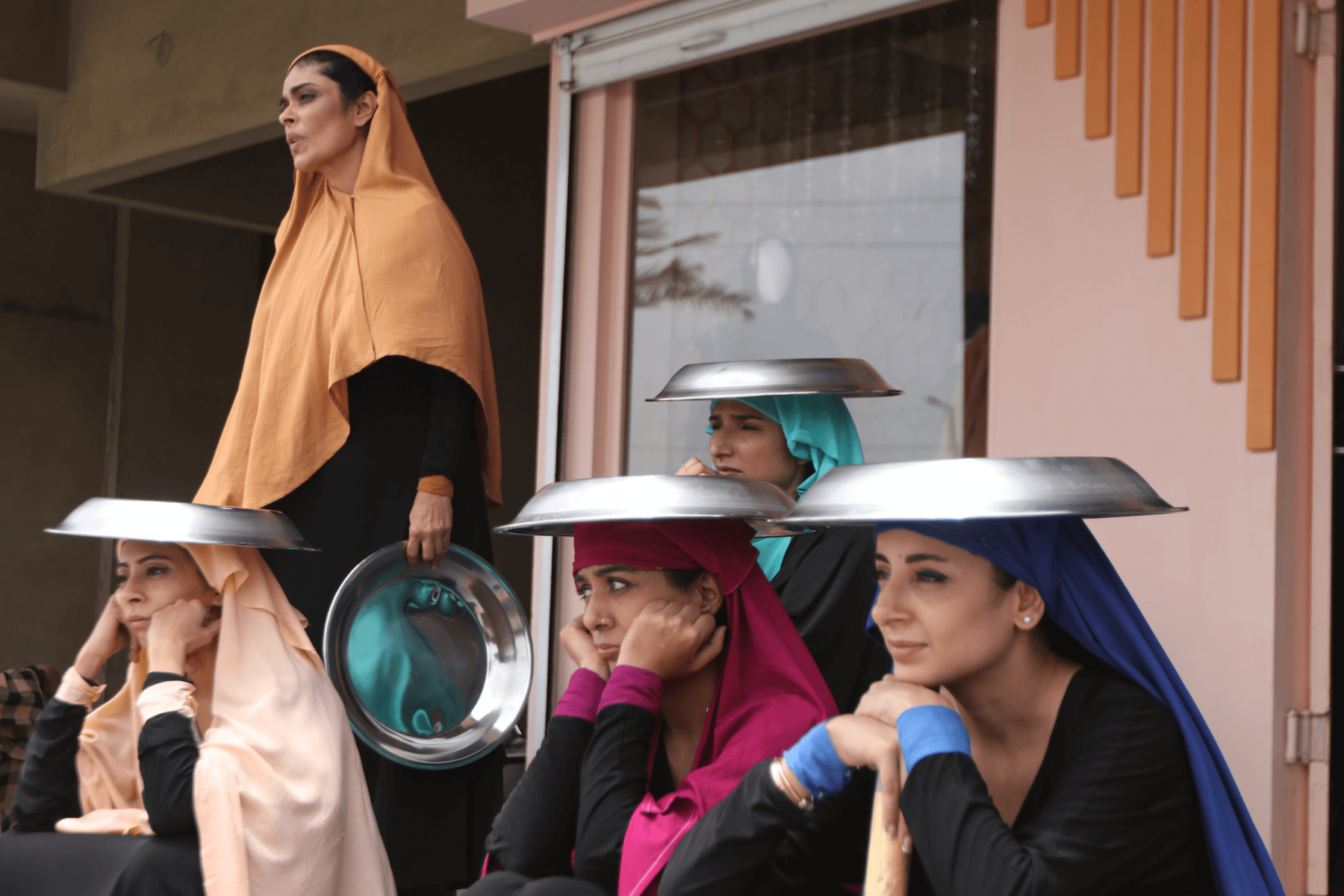 Asim Abbasi’s 2018 film “Cake” won unanimous acclaim — so much so, in fact, that it was shortlisted for the Oscars. It looks like his days of acclaim are not just over yet with positive early reception to his new web-series, “Churails,“ a thrilling tale of four women coming together in a series of unfortunate events to run a detective agency.

Judging by the trailer, “Churails“ appears to be an interlinked web of stories with women-focused themes changing every episode. For anyone who has seen “Cake,” we’re familiar with Asim’s incredible ability to sketch out strong female characters and the issues they face. Will 10 hours of television, then, do justice to the struggles of the average Pakistani woman?

It was another ridiculously warm summer day in London when I picked up the phone to Asim, just before ordering biryani and binge-watching “Churails.” The idea of creating and releasing a web-series where women are their own heroes is cathartic and a welcome narrative. Surely, he must have been toying with the idea for a while?

Yes, I did toy with the idea for “Churails” a while. Some of the short films I’ve created in the past explore issues such as bulimia and infidelity – powerful narratives that need more screen time. I am always gravitating towards issues and stories that are women-centric, and I wanted a story that also included some family drama. All these came to a melting point and it accumulated in the form of “Churails.”

Alongside its novel thematic development, “Churails“ is also presented in an unconventional fashion for this kind of Pakistani drama, relying on the architecture and distribution of ZEE5 — an Indian video-on-demand service — rather than a broadcast or movie format. Why did Abbasi opt to go this route for the show, rather than write it as a conventional drama or film?

I wanted to explore a range of ideas which were going to be long, therefore; they couldn’t be contained in a feature-length film. It needed more time to cover a variety of content. I got lucky when ZEE5 reached out, and it was developed into a web series.

With a show centred around badass females, it’s easy to wonder if the leading ladies and each character they’d play were already thought-out in Asim’s mind.

When I’m writing I don’t think of one particular actor. As soon as the writing part is coming to an end, I have a few actors in mind from each character that I want to reach out to. However, it’s the kind of content that doesn’t come very easy in Pakistan. They were all women, they did not need men to save them, they were the heroes. That’s how it happened. They all came together and they gave me a lot of their time which I’m very grateful for. We had two months to get all of us together which is unheard of even in the West.

The usual narrative we see on Pakistani television revolves around subservient women crying over their mothers-in-law, and husbands who don’t take a stand against injustice. How does one step away from the cliché to create a show that smashes patriarchy?

Nothing excites me about clichés. Even though all my storytelling is morally ambiguous, I don’t believe myself to be a teacher or feel like I have a responsibility in terms of talking about morality. I do think that as a storyteller, it is my job to be as authentic as I can. And that includes depicting women as I have met them. I have been surrounded by strong women all my life. Even when I’ve encountered women who are in positions that suppress them, they have fought back. And I always wonder, where are these women on mainstream TV? Why aren’t they getting representation? That was the point where I said that I can’t do what everyone else is doing, just because that is the accepted norm in the name of commercialism.

Churails, witches, witchcraft — all usually symbolic to evil, wicked and “dishonourable” acts. What’s it like to name a show after a word that, some may say, oozes negativity?

It’s all about reclaiming words. Every bad word used as foul language includes women. It is trying to reclaim these words and saying well, firstly, to break the system, we must take ownership for what the system views against us. Everything we associate with witches and witchcraft isn’t evil. In fact, it includes a woman who has love for herself, a woman who has female rage inside her, a woman who wants to live life on her own terms. Every quality that a witch has includes emotional liberation, aggression and courage. These are all positive attributes that women should be celebrated. By reclaiming this word, we allow women to wear it as a badge of honour and we disallow it to be used in a derogatory way anymore.

But desis are well-known for not readily warming up to titles and content that aren’t in their realms of “accepted” or “normal.”

It takes time for people to accept the title for its truest meaning on both sides of the border, however; this sparks debate and dialogue. A lot of women are coming out and saying they are claiming their inner churails, and how they’ve fought back in real life. Of course, traction will be gained within a specific audience first, the ones who have and have been fighting for women’s rights. However, others may take some time to reciprocate. But that’s the beauty of the web, isn’t it? The content is there, they can view it anytime. Norms change and expectations change, and hopefully; we’ll have more churails in the foreseeable future.

A detective agency led by Pakistani women is a relatively unexplored territory. The trailer shows us two sides — an almost “cheerful” drama which turns ugly after infidelity comes into play. The second part depicts missing women and escort rings. The varying themes seem to set it apart from other women-focused shows.

There have been stories which revolve around four women before, but yes, our show is significantly different. It deals with real societal issues and how to navigate that world. So, both sides can relate to it, not just individuals hailing from privileged backgrounds. There are two women in the show who are very elite, and two who aren’t as fortunate at all. They all unite for this common cause of equality in order to expose bad men. They then help women who can’t afford private investigation, as pro-bono work. Oppression is a global phenomenon, it’s not just an India/Pakistan problem. It stems from power, and power stems from gender. For me, showing two women with a very global outlook who are well-travelled and well versed, and two who are more traditionally rooted had one common problem that brought them together. Yes, one might be dealing with a cheating husband and the other may be dealing with an abusive father, however; they are both manifestations of a similar kind of oppression.

Asim entered the world of film and drama through digital media and short-form content, until “Cake” and its smashing success. Surely, the digital sphere has changed in the last few years and differs greatly from the traditional cinema.

A web-series is not long-form content, but film is. Yes, it is absolutely amazing to have your first film release to international audiences. However, cinemas all over the world are currently struggling with the pandemic. I’m not sure where the future of cinema is, especially in Pakistan because we were and are just starting out and exploring different themes. There’s not that much content coming out and people aren’t making trips to the cinema to watch films. This is where I think web is the future. And frankly, it is the most liberating medium right now because I’m not working under strict guidelines. I’m not working under the rules of censorship. ZEE5 came and commissioned and financed the show, but the creative reins were always in my hands. I could tell the story exactly how I wanted to. I said I wanted the last episode to almost be like a feature-length film and it was done. These creative liberties do not come easily in traditional cinema. So, for me, it’s been a very exciting step forward. At the end of the day, I am a storyteller who’s not tied to just one medium.

With “Churails” leading a private detective agency smack in the middle of Karachi, it’ll be interesting to see them challenging patriarchy, starting a dialogue and dodging decisions (and bullets). The show is now available online, streaming exclusively on ZEE5’s premium service.