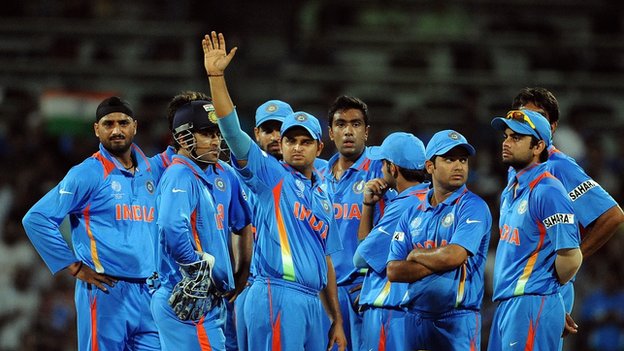 Over the years, Yankee Stadium has become one of my favorite places in New York. This has nothing to do with my affection for baseball, the B train, or the Bronx—rather, it is the energy of the game and its spectators that draws me there each spring and summer. The lights, the music, the fans, the crowd’s constant buzz that crescendos into a roar when the Yankees step up to bat…these create an invisible electricity that amplifies each dimension of the game and viewing experience.

As it turned out, I found myself in Calcutta, India for the start of baseball season this year. Although thousands of miles away from New York, I quickly found that I wasn’t far from ball game fever—in the form of the ICC (International Cricket Council) T20 World Tournament. While I had learned long ago that cricket is one of the preferred pastimes in India, I noticed that this preference is significantly intensified when the Indian national team sails through tournament rounds, as they did this year, to the semi-finals.

On a seemingly normal April evening, I strolled into South City Mall in South Calcutta. As soon as I entered, I heard the familiar roar of a crowd. I walked further into the mall and felt like I had stepped into an arena—spectators lined the edges of the four floors of the mall, eyes glued to the atrium’s large screen broadcasting India’s semi-final match against South Africa. I made my way up the escalators, settling for a corner spot on the third floor. On the screen three floors below, Indian off-spinner Ravichandran Ashwin bowled to South Africa’s Faf du Plessis. Out! The crowd roared as India picked up a wicket. Excitement, thrill, and anticipation spilled over from spectator to spectator and eventually to me–and in this I found a familiar sense of belonging that I thought I had left miles away at Yankee Stadium.

India beat South Africa in that match, and advanced to the final round against Sri Lanka. While I thought that the semi-finals had shown me the devotion Indian cricket fans are famous for, I soon realized that as of yet, I hadn’t seen much of anything. In the two days between India’s semi-final victory and the final match against Sri Lanka, India’s national cricket team dominated the media: the impressive (and extremely gorgeous) Virat Kohli graced the covers of newspapers, captain Mahendra Singh Dhoni gave interviews praising his teammates, cricket analysts and commentators compared team statistics and predicted the winner.

For this match, I didn’t even have to venture to the mall to see the excitement; the cricket fever had spread to the field in front of my apartment complex. A large screen and chairs were set up, made complete by a food stall offering chaat, ice cream, and cold drinks.

The field full of fans, food, and of course, cricket.

On the night of the match, I made my way to the field and chose a seat in the back so I could take pictures. As the time for the coin toss approached, fans–faces painted, chaat and drinks in hand–settled into their seats. We roared as the screen showed the Indian cricket team walking onto the field. We let out a groan as Sri Lanka won the coin toss and opted to bowl first (India had done marvelously well chasing targets so far in the tournament). We stood and sang as the national anthem, Jana Gana Mana, was played. And so, the game began.

India’s eventual loss in the final round was no doubt disappointing (we still love you Yuvi!). We all walked away from the field disheartened that night with disappointment etched on our faces, much like the departing crowd at Yankee Stadium after a loss. Yet, we all seemed to be sharing the displeasure of defeat–just as we had shared the anticipation in the days before the match, the excitement as the coin was tossed, and the hope that even as victory seemed elusive in the final overs, maybe our team could still win. While the pervasiveness of disappointment throughout the community of spectators momentarily made one’s own discontent more acute, it also–in a subtle, indefinable way–alleviated it. Through the realization that other fans were just as, if not more so, disappointed than I was, my own personal sense of regret was slightly lessened.

While this particular experience demonstrated that when it comes to sports, emotions surrounding victory and defeat are better off shared, I think this same idea can be applied more broadly as well. For instance, I feel my own personal sense of community when I share my experiences as a young woman and read about others going through the similar triumphs and challenges of navigating cultural and generational differences. Reflecting on this common experience not only helps me clarify the nuances and complexities of my own circumstances, but also reassures me that I’m not alone in the challenges I face. It seems that ultimately, no matter what the context, the collective sharing of our individual hope, anticipation, excitement, frustration, or disappointment fulfills one of our most basic human desires: to know that we are not alone.

As I made my way home that night after the match, I heard our “tsks” and lamentations gradually turn to “chalo, agli baar”s—the disappointment slowly fading into hope for the next time. And so, in hope and anticipation, we all wait together…

For IPL* to start next week. Go Kolkata Knight Riders!