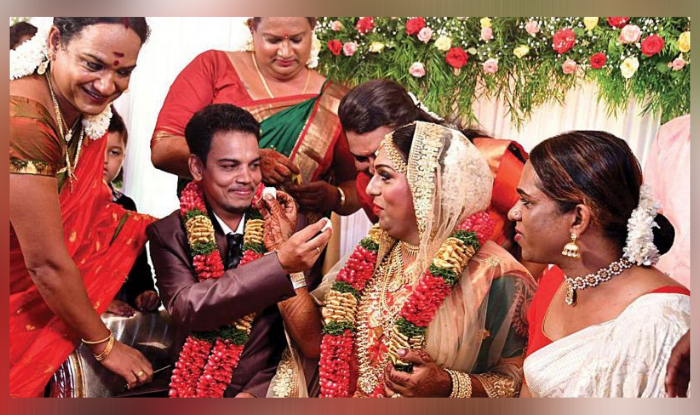 In a victory for the Indian LGBTQ community, the Madras High Court announced that the term ‘bride’ in the Hindu Marriage Act, which categorizes the laws relevant to marriage in the Hindu community in India, can also refer to a trans woman and should not be restricted to someone born a woman.

The court also ordered authorities to register marriages between a man and a trans woman, at the end of April.

The order took place after registration authorities in Tamil Nadu, South India refused to register the marriage of Arun Kumar and Sreeja, a man and a trans woman who had approached the authorities after uniting through marriage in a temple ceremony.

The South Indian authorities had refused to accept the marriage based on the Hindu Marriage Act of 1956, which stated under Section 5 that trans women cannot be treated as a bride.

Justice G R Swaminathan, one of the judges on the bench, did not accept this. According to Vice, he believed refusing to recognize a marriage on the grounds that a trans woman cannot be a bride was wrong.

Swaminathan referred to past judgments of the Supreme Court in NALSA, Puttuswamy (a privacy case) and the Section 377 repeal, and even quoted Hindu epics like the Mahabharata, declaring that the ‘personhood’ of transgender persons has been recognized under the Indian Constitution.

Gender identity falls within the domain of personal autonomy and involves her right to privacy and dignity. It is not for the state authorities to question this self-determination of the second petitioner herein,” Swaminathan said.

“For too long, transgender persons have been languishing the margins. The Constitution of India is an enabling document. It is absurd to deny the transgenders the benefit of the social institutions already in place in the mainstream,” he added.

While this is not the first time a transgender marriage has been registered in India, this decision by the Madras High Court sets a precedent that trans individuals cannot be discriminated against in marriage registrations.

This Court is not breaking any new ground. It is merely stating the obvious. Sometimes to see the obvious, one needs not only physical vision in the eye but also love in the heart,” the court said in a statement.

Prior to the ruling, the NHRC forwarded the complaint to the Union Ministry of Health and Family Welfare, whose response was that the surgeries could be done with the consent of a parent or guardian.

The High Court considered this response “strange,” Scroll India reported. The Court then asked the Tamil Nadu government to issue an order against sex-reassignment surgeries on intersex infants and children. The Court stated that children must be given time and space to discover their true gender identity.

“Consent of the parents cannot be regarded as the consent of the child,” the judge issuing the order said. “Neither the father nor the mother can claim suzerainty over the child and in the ultimate analysis, the children are not the children of their parents.”

The judge also added that there should be no shame associated with the birth of an intersex child.

The Intersex Society of North America (ISNA), defines “intersex” as a general term referring to a wide range of conditions, in which a person is born with sexual anatomy that does not fit the typical definition of a male or a female.