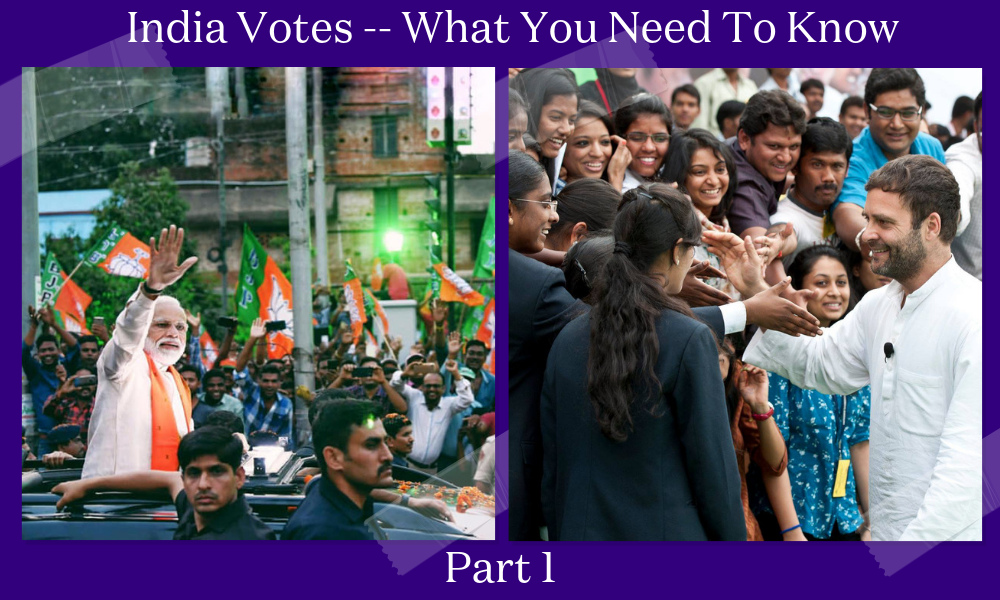 Deemed as one of the largest democratic exercises in the world, the Indian elections began on April 11, and with about 900 million Indians eligible to vote the polling will take several weeks to complete. While India’s democracy has numerous parties, two prominent parties are the Bharatiya Janata Party (BJP), who will be seeking reelection, and Congress, the main opposition party to the BJP.

In this segment, we will break down the history and current stances of these two parties. This will be followed by another piece examining the key issues in the election as well as a quick primer on the structure of elections in India.

In the 2014 elections, the BJP won by a landslide and Narendra Modi was elected as prime minister after running a campaign on anti-corruption and economic growth — promising a ‘Shining India.’

The BJP is a right-winged political party rooted in cultural nationalism, it is also the country’s largest political party in terms of representation and party membership and enjoys close ideological and organizational ties to the Rashtriya Swayamsevak Sangh (RSS), a Hindu paramilitary organization.

In the early 2000s, Modi and the BJP came under fire for initiating violence against Muslims in the state of Gujarat. Modi, the then Chief Minister of Gujarat, and other government officials were accused of condoning the violence and giving lists of Muslim-owned properties to violent rioters.

Approximately 1,000 people, mostly Muslims, were killed, 20,000 Muslim homes and businesses were destroyed, and about 150,000 people were displaced. Despite getting worldwide criticism for the handling of the riots, Modi was re-elected as the chief minister of Gujarat. The United States then imposed a visa ban on Modi, which wasn’t lifted until 2014 when he became a candidate for prime minister of India.

The BJP runs on Hindutva – the ideology that nationalism means favoring Indian culture over Western cultural influences. The ideology also attempts to redefine India as a Hindu country, excluding all other religions. A notion that has been prominently on display in the last few years of the party, especially in regards to the renaming of cities across the country. The BJP also opposed migration from Bangladesh and supported Section 377, a law that criminalized homosexuality.

One of the biggest and most criticized policies that Modi implemented during his first term as prime minister was demonetization. In November 2016, the government demonetized 500 and 1000 rupee notes, intending to stop counterfeit currency and stop the use of black money. However, this move mostly harmed middle and lower-class Indians and led to severe cash shortages. The move sparked protests across the country and long lines at the bank in the heat to exchange money, even some hospitals refused the old currency — which led to many deaths.

Under BJP and Modi rule, India started to face an increase in intolerance towards minority groups in India, specifically Muslims. Modi and other BJP leaders continually use Islamophobic rhetoric to incite fear against religious minorities. The number of lynch mobs and hate crimes against Muslims increased under the BJP’s pandering to Hindu nationalism. While the BJP did receive a boost in support after their aggressive stance against Pakistan after the attacks in Kashmir in February, this election is shaping up to be a tight race.

The other of the two main parties in India is the Indian National Congress (INC), the oldest political party in the country. Formed in 1855, INC was created as a platform for civic engagement and dialogue amongst educated Indians. It took the better part of 50 years for the voice of dissent and calls for home rule to become prevalent in the party and the push for independence expanded once the party opened itself to the public after World War I.

INC came to official power for the first time during the provincial elections of 1937, taking eight of the 11 elections. In the move for independence that followed, INC found itself at odds with itself as loyalists, traditionalists, reformers, and activists within the party attempted to establish a collective stance.

The echoes of this exist even today as the party sticks to its slightly center-left positioning while the voter base is split between young urban activists, particularly women, calling for change and rural voters, who may have left the BJP after feeling left out of Modi’s politics.

[Read More: Women are Rising in Politics — So Why Don’t More Brown Girls Run for Office?]

INC became the dominant political party in the country after sweeping elections on a national and state level in 1952. It held national power until 1977 when it was defeated by the Janata coalition. They returned briefly to power in 1980 for another nine years before being defeated again. In 1991, INC began to form and rule in the coalition—strategy repeated in 2004 and again in 2009 as the head of the United Progressive Alliance.

Under Jawaharlal Nehru’s leadership from 1951-64, the party-oriented itself around a series of policies promoting a mixed economy of thriving public and private sectors. His death in 1964 and the quick succession and death of Lal Bahadur Shastri in 1966 demonstrated a split that would haunt the reign of Nehru’s daughter, Indira Gandhi.

Indira spent the first five years of her prime ministership in various disagreements with members of the old guard and her cabinet over her abrupt nationalization of 14 Indian banks and her endorsement of V.V. Giri for the post of President. She was later expelled from the party but retaliated by launching her own faction of the party, called simply Congress (I), which soon had its first taste of power in 1971 during the mid-parliamentary elections. However, this result was contested by the High Court of Allahabad, which declared her election to the Lok Sabha void on the grounds of electoral malpractice.

Four days later, Indira Gandhi declared a state of emergency that would span 19 months of restlessness, suspension of civil liberties and abuse of power by her son Sanjay Gandhi. The press was censored and political opponents were thrown into jail. Sanjay himself spearheaded a sterilization campaign, that was voluntary on paper but was dodged by stories of violence and trickery, forcing sterilization on the susceptible.

The biggest stain on Indira and the party’s reputation, however, was Operation Blue Star and all that followed. Her rule also saw an increasing call for Sikh separatism under the Khalistani movement, most prominently articulated in the Anandpur Sahib Resolution.

In June 1984, she ordered a regiment of troops to storm the Harmandir Sahib in Amritsar in order to capture Jarnail Singh Bhindranwale, leader of the Damdami Taksal, with whom Congress (I) was at odds with before and after 1971 — and went as far to deem him a terrorist after realizing that he could not be controlled.

Conducted over three days, Blue Star required a media and electrical blackout in the state of Punjab and included a direct attack and firing upon the Harmandir Sahib complex as well as civilians inside. Bhindranwale, along with about 500 others was killed. This number is highly disputed globally, with estimates going upwards of 1,000 to include innocent pilgrims at Harmandir Sahib, there to commemorate Guru Arjan Dev Ji’s Shaheedi Diwas (day of martyrdom). This move was widely criticized by the Sikh community as an attack on the religion itself—which has a longstanding history of struggle with the government.

Gandhi was assassinated in October by her two bodyguards, Beant Singh, and Satwant Singh in retaliation. The assassination sent the party and much of the country into turmoil as prominent members of the media, government and film fraternity went on air calling for “revenge” and “insaaf.”

Rajiv Gandhi was abruptly sworn in and swift, debilitating violence against Sikhs in Delhi and several other North Indian cities began within hours. Large mobs comprised of Hindus gathered around the AIIMS hospital where Indira died, before taking the streets armed with any and everything they could find.

Over the course of three days, Delhi experienced an influx of horrific rapes, murders, mutilated corpses — some were even burnt alive. One of the most infamous incidents took place over the course 72 hours in a Trilokpuri colony, where 300 Sikhs were butchered as block 32 went up in flames. The Delhi police imposed a lax, unenforced curfew standing by as mobs raped, murdered and looted Sikhs across the capital — in some cases jumping directly into the violence themselves, in others deliberately showing up late to the site of crime. The 1984 Anti-Sikh Riots claimed the lives of more than 3,000 Sikhs, and INC is internationally held as responsible for the violence because they too did little to control the raging masses.

The Delhi High Court gave a verdict on a 1984 related case in 2009 and in their ruling stated:

Though we boast of being the world’s largest democracy and the Delhi being its national capital, the sheer mention of the incidents of 1984 anti-Sikh riots in general and the role played by Delhi Police and state machinery, in particular, makes our heads hang in shame in the eyes of the world polity.

The riots themselves are recognized as a genocide by the Akal Takht and the Human Rights Watch.

INC has neither acknowledged nor apologized for what happened.

Rajiv Gandhi, who was suddenly sworn in in the aftermath, faced many other difficult decisions. He was later implicated alongside other officials in the Indian and Swiss government as receiving illegal kickbacks from Bofors AB, a Swedish Bank owned by the Wallenberg family in order to receive a Rs 1500 crore arms contract—resulting in a big defeat for INC in the 1989 election.

He was later assassinated by an LTTE suicide bomber in 1991.

His widow Sonia Gandhi would go on to assume the role of INC president in 1998, but her Italian origin was a sore spot for some in the party. Her administration, with Manmohan Singh as prime minister, was characterized by strict adherence to the center-left of the political spectrum, pushing the “Aam Admi” slogan asking “Who India is For?”

Her son Rahul Gandhi was seen as the likely successor, and the family’s direct political legacy became a rallying cry for the opposition.

With such a storied history of family lineage, mired by scandal and controversy, it is difficult to pinpoint the heartbeat of INC. It has spawned an array of political leanings and figureheads, and with such a varied reception from vitriol, to loyalist voting, leaves many unable to predict the outcome of this election cycle.

For better or worse, many see Congress as the BJP alternative, but certain skeletons explain why many cannot find it in themselves to give the party their vote.

In this election cycle, Congress is doing its best to revitalize its youth wing, paint itself as a more progressive party and denounce the vitriol of the opposition. Their emphasis is on a return to civic involvement and a fresh start with Rahul. How they get there and how much of their past they address will continue to be critical.