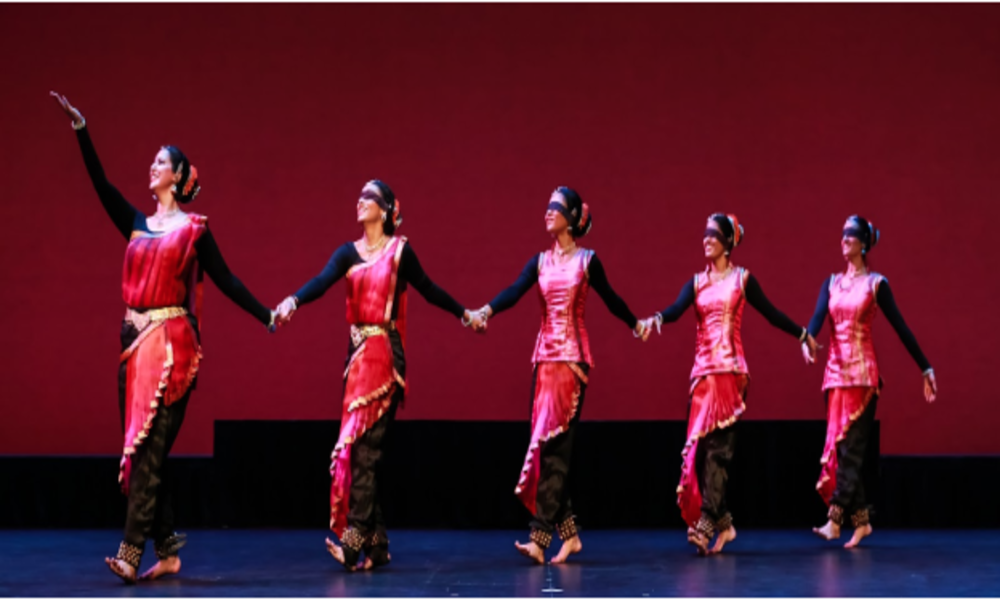 Indique Dance Company is a Dallas-based Bharatanatyam dance company that has been on the rise in the Dallas arts sphere. Its mission is to connect new audiences to Bharatanatyam and to tell contemporary stories through this age-old dance form.

For people on the outside, we usually have to start with what Bharatanatyam is before we can tell them we’re doing something different with it.

The story topics Indique performs can be as light-hearted as sari shopping to as heavy as bullying in schools. The social consciousness behind some of their dances allows Indique to connect to Bharatanatyam in new ways. They haven’t had whole productions on human rights but they’ve found human rights tangential to a lot of the broader themes they’ve explored.

“One of our productions was about the movement of people. The translocation of people. Whether it be one country to another. There’s something related to social justice there so, we had a production of that nature,” says Latha. “So that was the time to bring in certain environmental topics. It’s always important to bring up relevant social issues to connect with people.”

[Read Related: On Career Breaks and Materializing Dreams: How I came Back to Bharatanatyam as an Adult]

In addition to the choreography and themes behind their dances, Indique sometimes works with nontraditional costumes.

We may do traditional steps but we also use nontraditional costumes to Bharatanatyam to make sure we portray the character we’re supposed to. That’s all fun for us.

Now a decade old, Indique has formed strong connections with the City of Dallas. They were one of three groups to teach classes at Hamon Hall in the AT&T Performing Arts Center. The three-class series was offered for free to the community as part of Dallas Arts Month.

The AT&T Performing Arts Center is a massive complex of performance spaces. It hosts major national touring headliners and is also a routine venue for many of Dallas’ prominent arts groups. It is prestigious to perform there and often gives local groups access to a wider audience.

Indique’s last major production was part of the Elevator Project, hosted by the AT&T Performing Arts Center and the City of Dallas’ Office of Cultural Affairs. The Elevator Project presents emerging and historically marginalized arts groups.

“We’re just starting to hit certain aspects of our mission statement. The elevator project opened the door to one of our main missions which is to bring this art form to a whole different audience,” says Anu.

The production Indique presented at Elevator in December 2018 was called Svabhava, which means ‘giving meaning to one’s life.’ Indique challenged itself to take this abstract, grand concept and put it into physical form. This challenge of concretizing abstract larger concepts is something Indique takes on time and time again.

“One of those processes that, when you look back on it, you really kind of marvel at it. Like, ‘how did we come up with that?’” says Latha.

After performing at AT&T, Indique began to think about becoming a nonprofit. They hoped to become a more formal organization and maintain an open, loose and egalitarian structure that it has fostered so much creativity in their company. This summer, Indique has finally become a non-profit.

Indique started in the summer of 2008 in the same quintessentially American way dreams do–just nine or ten of them getting together in one of their parents’ garages. Indique members were young adults when they got together.

“We just sat and talked about how to take the idea of dancing together into a space that seems feasible and has a future considering everyone’s at different ages and different things are going on,” says founding member Shalini Varghese Chandragiri. “Some were getting married, some people have children. How’s this going to pan out?”

Fitting practices into everybody’s schedule required its own highly skilled choreography. Some members had families and some were in school. One had just gotten accepted into medical school.

After much discussion about scheduling, they articulated the mission that makes them unique from other dance companies. Shilani says,

We wanted to take something so traditional, so beautiful, preserving everything beautiful about it but using it as a platform to present to a different type of audience.

After that initial catalytic meeting in the garage, members met often to develop the company’s name and open a studio. There were many meetings dedicated to brainstorming because aside from reaching a large audience, the group wasn’t sure what its identity was. Many came from a very traditional background of classical dance so the new take on the classical dance form did not initially come to them.

“Essentially, dancing is a form of communication. We’re trying to express something. It’s like merging two languages. At the brink of the merge, how can we take from what we know and express it such that it connects to other people who might not be familiar with that language,” says Latha.

Indique’s first production was very traditional. The first production was very much about members rediscovering one another as adults and how they’ve grown because many of them danced as children. As adults, Indique members learned to organize without an authority figure or teacher supervising them. To this day, the company’s hierarchy is flat and egalitarian. Everyone decides the production theme and contributes to the choreography. Latha says,

We wanted to maintain the integrity of what we had learned. We didn’t want to disrespect it in any way. But, at the same time, we wanted to make it accessible. Finding that definition, that’s what our exploration was.

From the second production onward, they always included an MC to give some context for the story. That way, the audience can look at it from a different lens.

Now, Indique has the creative process down. Members gather over “too much” chai and food to chat and brainstorm about theme ideas. From those sessions, they come up with ideas for dances. Most, if not all, members have had a hand in choreographing a production.

They all have their micro-processes: Shalini needs the right music before she begins; Latha works well through trial-and-error; Anu draws her inspiration from real life.

But in the end, their choreographies merge to make a production. From there, it takes adjustments and rehearsals until they have a presentation-ready production.

Indique will be having a big tenth-anniversary program, TriKala, at Moody Performance Hall in Dallas on August 3.