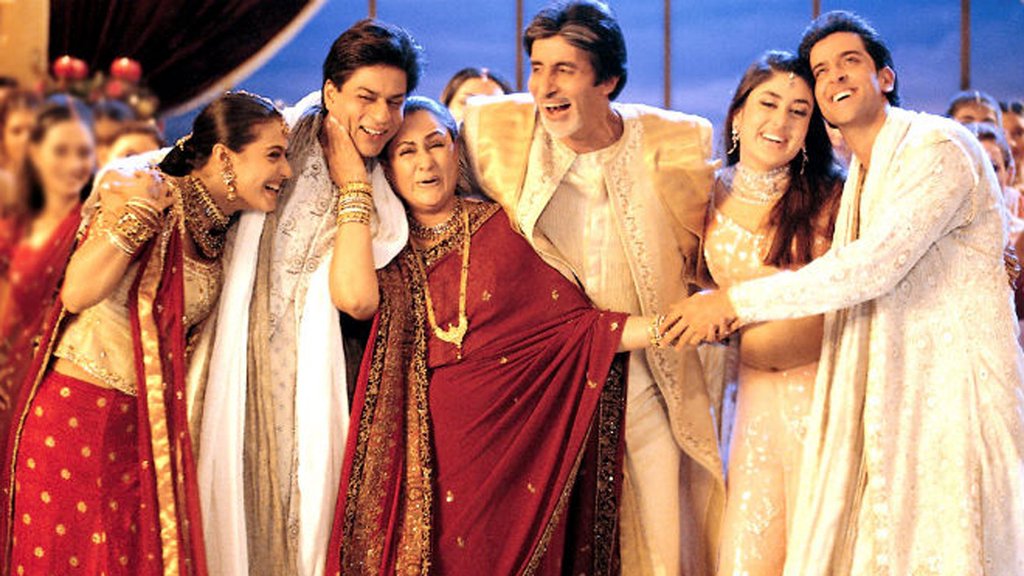 Anyone who’s ever seen and loved “Kabhi Khushi Kabhie Gham” will agree that this iconic film has an equally iconic soundtrack. It remains perhaps my favorite Bollywood picture of all time not only because of the timeless story of love and family but also because of the songs that I committed to memory so long ago.

I remember listening to my copy of the CD over and over and watching the musical numbers repeatedly until I knew all the choreography to every song. And as I listened to them again recently, it was as if no time had passed at all and I was right back experiencing it as if for the first time. But these songs are best enjoyed when shared with friends.

So, join me and let’s take it back to 2001 for a moment and relive all the feelings the soundtrack gave us, as tomorrow marks the 15th anniversary of this iconic film (and music)!

The moment Lata Mangeshkar, “The Nightingale of Bollywood”, sang the first note, tears sprung to my eyes. It took everything in me to keep them from falling. The title track is so emotional, it’s like it goes right through my soul. I can just picture the scene when Jaya Bachchan’s character Nandini instinctively senses the return of her eldest son and how powerful it was in showing a mother’s love and intuition. (Side note: I do love me some Jaya Bachchan, she is adorable in this movie.)

This song has such a beautiful meaning behind it about the relationships within families and the strong bonds shared, so it’s an immediate favorite. And of course, after all this time, I still know all the lyrics to sing along. I don’t understand or speak a word of Hindi but I know this song as if it were a sacred verse of scripture, and that speaks to its depth and power.

Now, this is my JAM! I was obsessed with this song! I knew all the choreography and even performed it in high school during our annual multicultural show. It’s just so fun and uplifting. When this song comes on at desi parties, it’s bound to get everyone dancing. I love the beat and whole vibe of it. It’s one of those songs that bring joy whenever you hear it which gives it a special role in both the movie and my heart. And at the end, the reprised “Kabhi Khushi Kabhie Gham” line that connects it back to the title track and theme of the movie is such a nice touch.

“You Are My Soniya”

Another fun jam! It’s not my favorite but it’s a very cute little love song. Heart eyes all the way for Rohan and Pooja! It’s upbeat and catchy and just makes for a good time whether you’re listening with friends or having a solo dance party.

This is such a sweet, slow-burning love song. If you thought Rohan and Pooja had a beautiful love story, they have nothing on Shah Rukh Khan and Kajol’s Rahul and Anjali. Those two make my heart flutter and the visuals in the movie of them singing this song together in harmony is just perfect. I mean have you ever seen or heard anything more precious? And the fact their their relationship was initially forbidden just adds to the drama and angst of their enduring love. Ugh. FEELINGS!

Okay, enough mushy stuff. This song is just fun, fun, fun! It’s from the scene where Amitabh Bachchan’s Yash Raichand is celebrating his birthday and has everyone getting down on the dance floor. This scene juxtaposed with the one of Anjali and her friends having their own celebration elsewhere shows the contrast of the two families and sets up the plotline of forbidden love to come.

A very enjoyable song, this one is another between Rahul and Anjali gushing about each other. Seriously, those two are so sweet together. It’s also a great one to dance to and helps unfold the pair’s blossoming love story in a vibrant and cheery way.

Yep. As if this song wasn’t heart-wrenching already in its original form, there’s a SAD version. Actually, there are two sad versions. Two! They’re essentially the same except for the artist singing it. Much slower and more somber, each version lasts just under two minutes which is short for a Bollywood song but is no less powerful as it reiterates the movie’s theme. To be honest, I just have to hear Lata Mangeshkar sing the “Kabhi Khushi Kabhie Gham” bit and I dissolve in tears.

Back to Pooja and Rohan! This is the first song they sang to each other when they first met as adults, not realizing they knew each other as children, and it’s just as cute as the two of them are together. I found myself amused by spoken word interjections that were supposed to be cool back then but apart from that, it’s really catchy. What I also love about this is Rohan’s impressive dance moves during his verses!

This is exactly what it says it is, the soul of K3G. It includes instrumental bits from the other previous songs blended together in a lovely melody. And again, ending with the signature “Kabhi Khushi Kabhie Gham” line, it is all tied together beautifully. And I must say, Lata Mangeshkar was certainly a big part of this movie and its soundtrack’s soul in lending her talents which are immortalized in these songs.

The final song on the soundtrack is the hymn to the motherland, India. It’s quite fitting because as far across the globe as each family member has traveled in their lives, they ultimately return home to India where their roots lie and where their families are reunited and truly joined together as one at last. It’s touching and leaves a strong message with the listener that there’s no place like home.

Looking back on K3G’s 15th anniversary, there’s no doubt that the tunes are just as fun, catchy, moving and meaningful as ever. In my opinion, this soundtrack has become a classic in Bollywood history. Each song brings something special to the movie and its overall theme and, as time passes, evokes wonderful memories for those who have a strong connection to the film like I do.

“Kabhi Khushi Kabhie Gham” will always hold a special place in my life. It reminds me of many precious moments spent with my family watching it repeatedly when we were still new immigrants to the US and it was one of our strongest ties to our culture that we held on to in a foreign country. And this beautiful soundtrack, which makes us feel everything from love and joy to sorrow and sadness, exemplifies the power of music and the role it plays in art and film and our very lives.