Entertainment In the News TrendingMarch 15, 2019 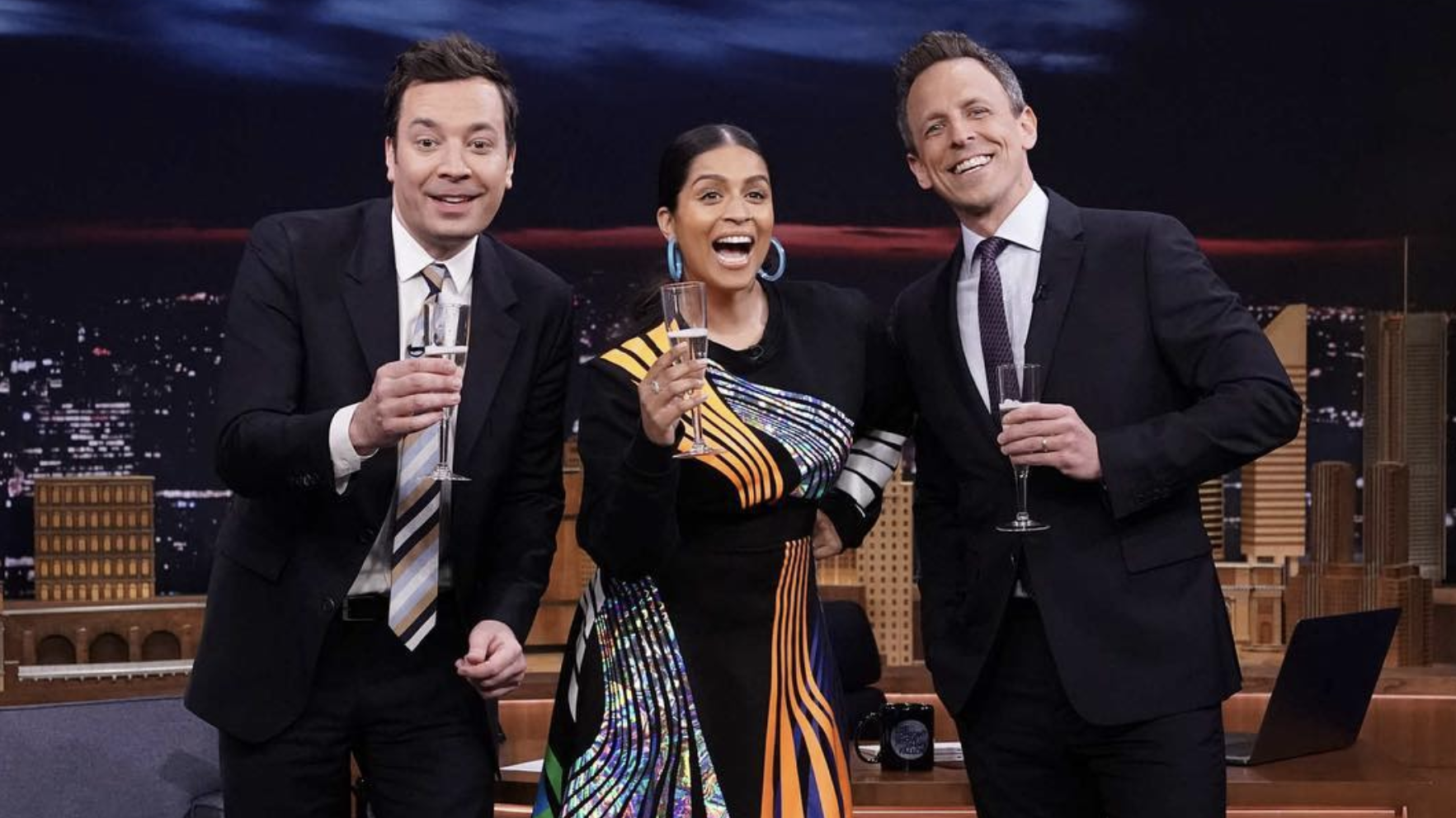 In huge news for South Asians in entertainment, NBC announced that YouTube sensation Lilly Singh would be getting her own late night talk show, following Jimmy Fallon and Seth Meyers. Singh will be taking over the time slot left by Carson Daly, who decided to end his long-running show, “Last Call with Carson Daly” once it hit its 2,000th episode later this year.

Singh’s new gig makes her the first woman ever to helm a late-night show on a major broadcast network. The new series will be re-titled “A Little Late with Lilly Singh,” and we at Brown Girl Magazine cannot wait to watch when it premieres in September. In fact, some of our writers have a few words of reaction and support for Singh and her incredible news:

This is huge! Huge for the Punjabi diaspora in the GTA (Greater Toronto Area), and Canada, huge for the South Asian diaspora, brown people, and women of colour in general. Representation matters! This is really good. It’s a great step towards more inclusion in entertainment. We should celebrate this as a community, but we cannot forget that this is one woman’s years and years worth of hustle!

This is the result of her hard work, day in and day out, her visible and invisible battles, her determination and resilience in the face of the struggle for a DECADE. You know that this woman put in the WORK! Let’s be real… Given that she’s a young brown woman from Scarborough(!) born to of Punjabi immigrants parents(!), she’s probably put in WORK to the power of three!

This is huge deal for her and we should celebrate her hustle right along with fact that her win is a win for us all. The fact that she brought us all along for it is SUPER.

Something BIG is coming. With the grace of god and support from my dog, I’m making the biggest announcement of my career tonight on @fallontonight with @jimmyfallon. I’m so nervous and excited. Ah ah ah!!!!! Stay tuned ????? #LillyOnFallon #TeamSuperAllDay

‘HOW AMAZING and EXCITING’ was my first reaction. Lilly Singh is an absolute star and amazing role model as an entertainer, which can be hard to do sometimes. I love that she is trailblazing for the South Asian community. I can’t wait to see her evolve and continue spreading her magic and positivity. Team Super all the way, forever.

While I believe I have outgrown Lilly Singh’s comedy and content, and I have found some of her material to be a bit controversial, there is no doubt she is a global phenomenon, force to be reckoned with, and a great role model in the South Asian community, especially as someone who has come out as bisexual recently. No matter my or anyone’s thoughts about the nature of her previous work, getting your OWN late-night talk show is a HUGE deal and something to be celebrated. Not only is she the first Indian-Canadian woman to host her own late night talk show, she’s the first woman to host one on one of the Big 4 networks, PERIOD! I’m looking forward to seeing Lilly Singh grow, bring and mentor other South Asian creatives on her show, and continue to make the South Asian community proud.

I never ever in my life thought I’d see the day that someone who could be my cousin is hosting a late night show. Hoooooooooly shit, South Asians are really on the come up!

Extremely thrilled about this and so proud of Lilly Singh to become the first Indian-Canadian woman to host a talk show on NBC, and first woman to host a late-night talk on NBC.

The Indian comic/comedy scene is buzzing with the likes Hasan Minhaj, Aparna Nancherla, Jameela Jamil, Mindy Kaling who paved the path for us & showcase a multitude of talent (Stand Up, Sketch Comedy, Talk Shows, Movies, TV Shows, Improv) and so many more like our very own NYC stand up duo ‘Kutti Gang’ (I will be performing with them on April 4th and met Aparna because of them!), our lovely American Born Desi Comics – ABDCs (whom I also got to perform with), Radhika Vaz (who got me into comedy) and so many more!

It’s such a great time to be an Indian comic and for people to now have more points of reference to Indian comics/comedy than Mindy Kaling. I no longer get ‘Omg, you’re just like Mindy Kaling’ after a performance which used to the norm for all Indians 5 years ago

As I pursue my dreams of comedy, sketch, acting and the desire to be the first Indian American on ‘SNL,’ I am in awe of these comics who continue to showcase that you can have it all! The future is desi!

? Female ? Coloured ? Bisexual ••• Throughout my life these have proven to be obstacles from time to time. But now I’m fully embracing them as my superpowers. No matter how many “boxes” you check, I encourage you to do the same x ??????

My initial reaction was ‘Hot DAMN!’ Lilly Singh is a force to be reckoned with. I may not follow her comedy as regularly as I used to during my college days, but that doesn’t even matter. Watching her rise to the top well before the easy accessibility of social media is HUGE. This is a monumental win for South Asians and for women in general. It’s going to be awe-inspiring to see someone who looks like me host her own late-night talk show. She’s earned this through and through.

It’s incredible to see a Toronto girl making it! Looking back from where Lilly Singh started, she was at a place in her life where she was unhappy and lost. She took that negativity and channeled it to create a positive impact in the world around her. She’s been growing and climbing for the past few years so quickly. Representation is everything and it’s great to see a woman of colour breaking into the late night game. I’m eager to see how she does!

THE Lilly Singh?? Another talented young South Asian female face in the media, against all odds and after years of incredible dedication to her respective communities — this is absolutely a heartwarming moment.

It’s so heartwarming to see not only a South Asian woman but a South Asian Queer and bold woman take stage. Following her journey one can truly see how hard Lilly Singh has worked to make it this far. I always hoped I’d be able to see someone I can truly relate to not only in looks and culture but personally on their own talk show in the US. It’s inspiring for not only South Asians who have seen her rise up but generations to come. Future children of immigrants won’t just hear that they can make it, but can see that they truly can. Lilly Singh has broken the silence on many issues in the South Asian community including mental health. Representation matters, but the right representation makes an even bigger difference.

Growing up, I dreamed of being a talk show host. I was dismissed so many times, by so many different people. The amount of people that told me “no,” simply because viewers would not want to watch a brown girl on tv was disappointing. So often our dreams have been limited because of our skin color. It brings so much joy and hope to finally see, one of our very own, Lilly Singh breaking these barriers.

Lilly Singh not only shows the world that representation matters, she also teaches us that it’s important to talk about all those taboo topics that as South Asians we have avoided. She has openly discussed her mental health and more recently has identified as queer. This is such a huge step for our community and I am so overwhelmed with joy that our youth will see someone who looks like them on such a huge platform. I dreamed of seeing, my surname, Singh, in lights, and Lilly is here showing us that all our dreams are possible, despite the limits previous generations have set because of our skin color. Congrats again to a true Superwoman!

My wish for myself and for all of you this year is to be surrounded by everything and everyone you need to be the best version of yourself. Let us be around people we can rely on whenever we really need but don’t become our crutch and damage our independence. Let us be around minds that challenge our ideas and introduce us to new perspectives. Let us be around the energy that encourages us to smile, laugh and be grateful. Let us be around mentors that motivate us to step out of comfort zones and strengthen our ambitions. May your energy and the will of God protect you against negativity, gossip, hateful acts and those unwilling to celebrate your individuality. And if that protection fails, let us be strong enough to cross any hurdles we may encounter. In 2019, we’re protecting our peace, leaning towards what we want more of and creating positive vibes at every opportunity. Happy New Year my loves. Thank you for being here. Also I’m not sure how this picture relates to what I just said but I like my hair. ??

As someone who has followed Lilly Singh for years, I’ve always been captivated by her exuberant, positive energy and ability to continuously grind. Whether she’s creating content, collaborating with superstars, writing books, acting or advocating for equal rights, she’s the epitome of striving for greatness despite setbacks.

Lilly’s ‘Bawse‘ attitude and hustler mentality is so admirable. To see a woman of color, represent major brands such as Pantene and Smashbox, appear in a Maroon 5 music video and on the silver screen, is something that seemed unattainable for a long time. Lilly continues to pave the way for so many people who may have never imagined seeing people who look like them on billboards or on TV.

I’m ecstatic to see someone so relatable (and deserving) go from creating content in front of her colorful wall of inspiration at her parents’ home to taking over as the first woman to host a late-night talk show on a major network. Lilly proves that hard work, good vibes and a ‘Bawse’ attitude will get you where you want to be no matter what bucket (Indian-Canadian, woman, person of color, bi-sexual) you fall into!