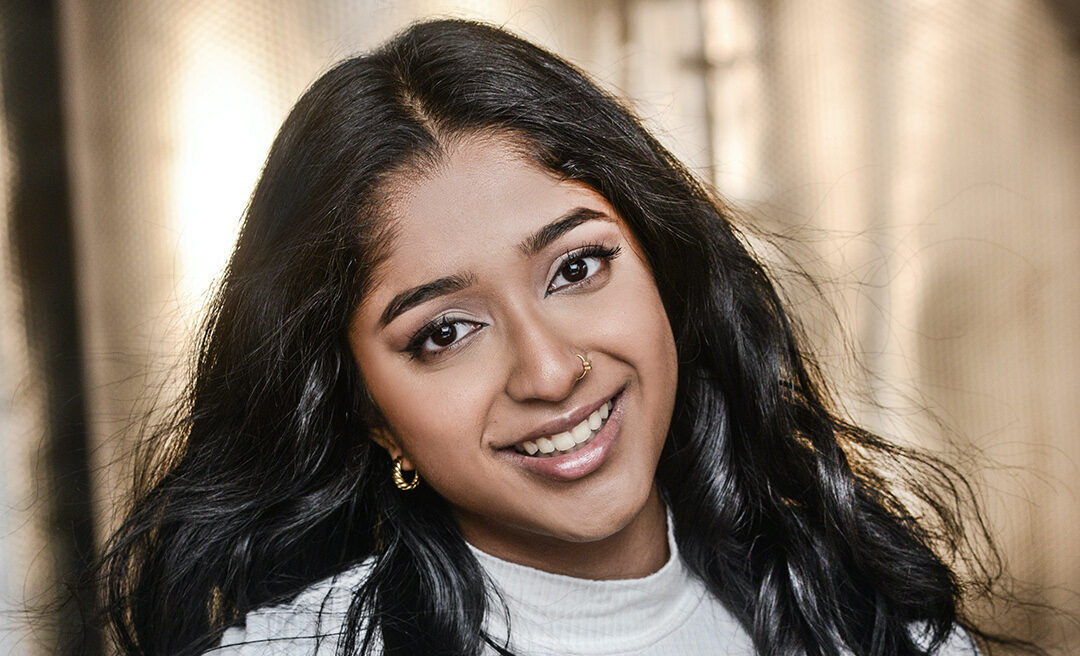 It’s the year 2002 in the bustling city of Toronto, the era of Tamagotchis, flip phones, and boybands. Disney and Pixar’s “Turning Red” features a groundbreaking number of firsts, especially the first South Asian character, Priya, in a Pixar feature film. Priya is voiced by none other than Maitreyi Ramakrishnan who brought us iconic Devi moments in “Never Have I Ever.” With her brown skin, round glasses and jeweled nose ring, Priya mirrors the features of many South Asian girls. This film takes us on an adventure with four besties, Mei Lee, Abby, Priya and Miriam as they battle the quirks of growing up. But for Mei Lee, her life starts turning upside down, or shall I say starts “Turning Red.” Every time she experiences heightened emotions of anger or excitement, she turns into a red fluffy panda. This transition into a panda mirrors the experience of many young girls as they invite new emotions growing up.

I sat down with Maitreyi Ramakrishnan to talk about coming of age, menstruation, South Asian representation and our spirit animals. 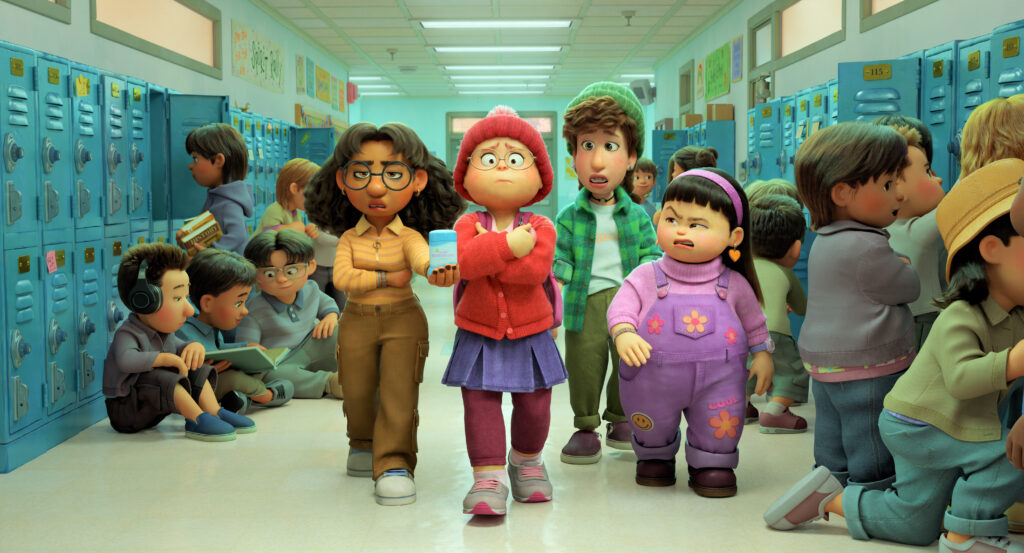 How did you learn about this role in Pixar’s new movie, “Turning Red“?

“My agent brought me this role and I only got to know that it was Pixar, that the character was South Asian and had a deadpan voice. Everything else was like super under wraps, it was Pixar so, of course, I auditioned.”

What was your first experience with voice acting like? And how did this environment differ from acting in “Never Have I Ever?”

“Obviously the difference of using voice only, versus your whole body. Both of them have their challenges. You know for voice acting you don’t have everything around you. You don’t have scene partners, a set to stand in, you’re just in a recording booth so you have to really use your imagination.”

Tell me about your character Priya, how does she serve as a representation for South Asian girls?

“Obviously, her being South Asian is representation alone and also a visual representation in an animated word. Representation in the animated world is much-needed especially when it’s younger audiences that watch animated movies. Now they get to watch Priya and see, oh there’s a character just like me. She also has her own personality, you can pick it up just from watching the trailer. She’s not just there in silence.”

Do you relate to Priya?

“I would definitely say in middle school, I was a Priya a little, I was moody, dark and stormy, just a dweeb that thinks they’re too cool for school.”

How can young girls relate to this coming-of-age story about friendships, crushes, and mother-daughter relationships seen in this film?

“All of these topics are very real and very common, no matter what you’re cultural background is, it’s a big part of coming of age. Pixar does a great job talking about it openly and casually, along with the chaos of middle school angst most girls have gone through.”

“Turning Red” also signifies and mirrors the experiences of puberty and periods for young girls, how does this help de-stigmatize periods, especially in South Asian households?

“The film talks about periods casually and makes it normal to talk about, not keeping it hush or sliding it in there. Like yeah periods happen and that’s that. It’s totally normal and we don’t have to whisper about it, why are we even whispering about periods? I’m the last person to whisper about my period, it sucks. It’s annoying. Growing up my mom was very open about my period, I was never taught another nickname of it, it was always known as my period and something to be celebrated. But with extended family, they can always be hush about it. But I’ve always been that person to say, I’m sorry I have really bad cramps I’m on my period, to whichever uncle. I am in too much pain to lie about my situation.”

Strictly speaking, we brown girls are tired of hiding our periods and remain unapologetic about it. I refuse to whisper about my cramps when if anything, the natural processes of our bodies are loud and beautiful and deserve to take up a conversation in society.

“The way to solve this issue of how should we tackle representation in television, is to hold the door open for other people when we cross through.”

This film features the first Sikh character portrayal in Disney, what does this representation mean for the South Asian community?

“The inclusion of a first Sikh character is awesome, it’s in a casual way and it’s a funny role too. It helps to bring more representation by existing in itself. The way to solve this issue of how should we tackle representation in television, is to hold the door open for other people when we cross through. This is just one story, but hopefully Turning Red inspires other animators to create these diverse stories with diverse casts in a natural and realistic way. Even with Priya, she is the first South Asian Pixar character that speaks. There was another film that features a South Asian character but that’s just a short. In a featured film, she’s the first South Asian character to be featured in a Pixar film.” 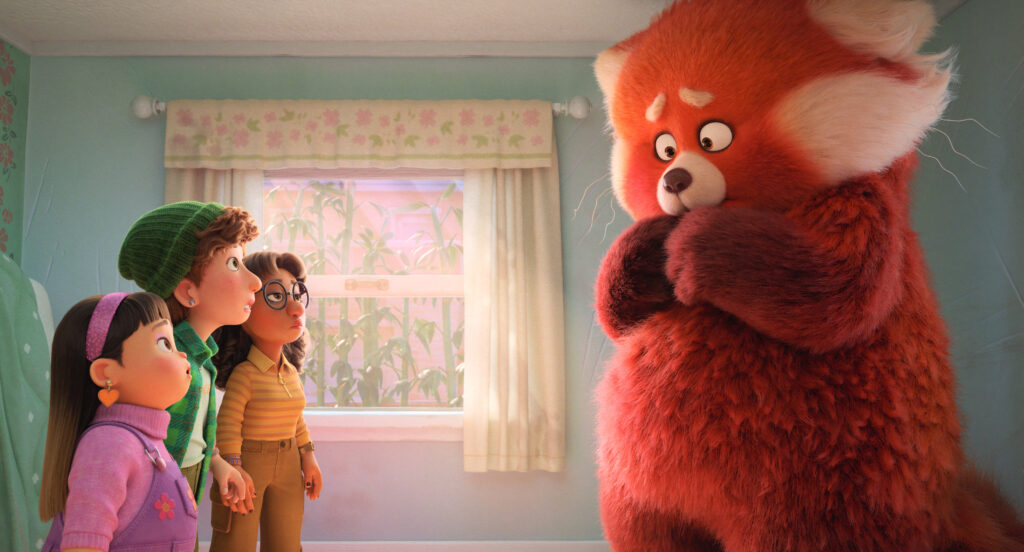 If Devi from “Never Have I Ever” and Priya were stuck in a room together, what would their conversation look like?

If you could turn into any animal every time you got excited, what would it be?

“I say a different animal every time, so depending on my mood, I would pick a polar bear, because it’s a cold outside and they’re fuzzy and strong. I want to be a coca-cola bear.”

If you could create your own coming-of-age story for brown girls, what issues would you highlight?

“I love this question. I think Devi tackles so much, and I’d want to talk about something specific to being Tamil and growing up Tamil Canadian. I’d want to replicate it about my life, definitely tackling double standards that brown women go through versus brown men, but also appreciating our culture of brown guys and brown girls, that we’re dope. Going through High School and middle school, I heard a lot of ‘oh you’re pretty for a brown girl,’ the backhanded compliments. I’d talk about how that takes a toll on a brown girl, all the backhanded compliments from your own family and school, the main character wouldn’t be sad though, she would be angry and a rabble-rouser, and I definitely do that right now.”

I’ll be in the front row of this film, popcorn in hand, ready to tear down the patriarchy and the backhanded compliments brown girls are dished.

After watching “Turning Red,” I can say with confidence, if you went through a One Direction phase, you’re definitely a 4 townie. This film grounds us in our experiences growing up, especially the awkward phases that inspire our adulthood. Eliciting this form of representation welcomes all the Priyas and little girls in the world to feel a sense of belonging. Maitreyi Ramakrishnan and other creatives continue to carve out these spaces and open doors for South Asian stories and experiences. “Turning Red” is now streaming on Disney+.