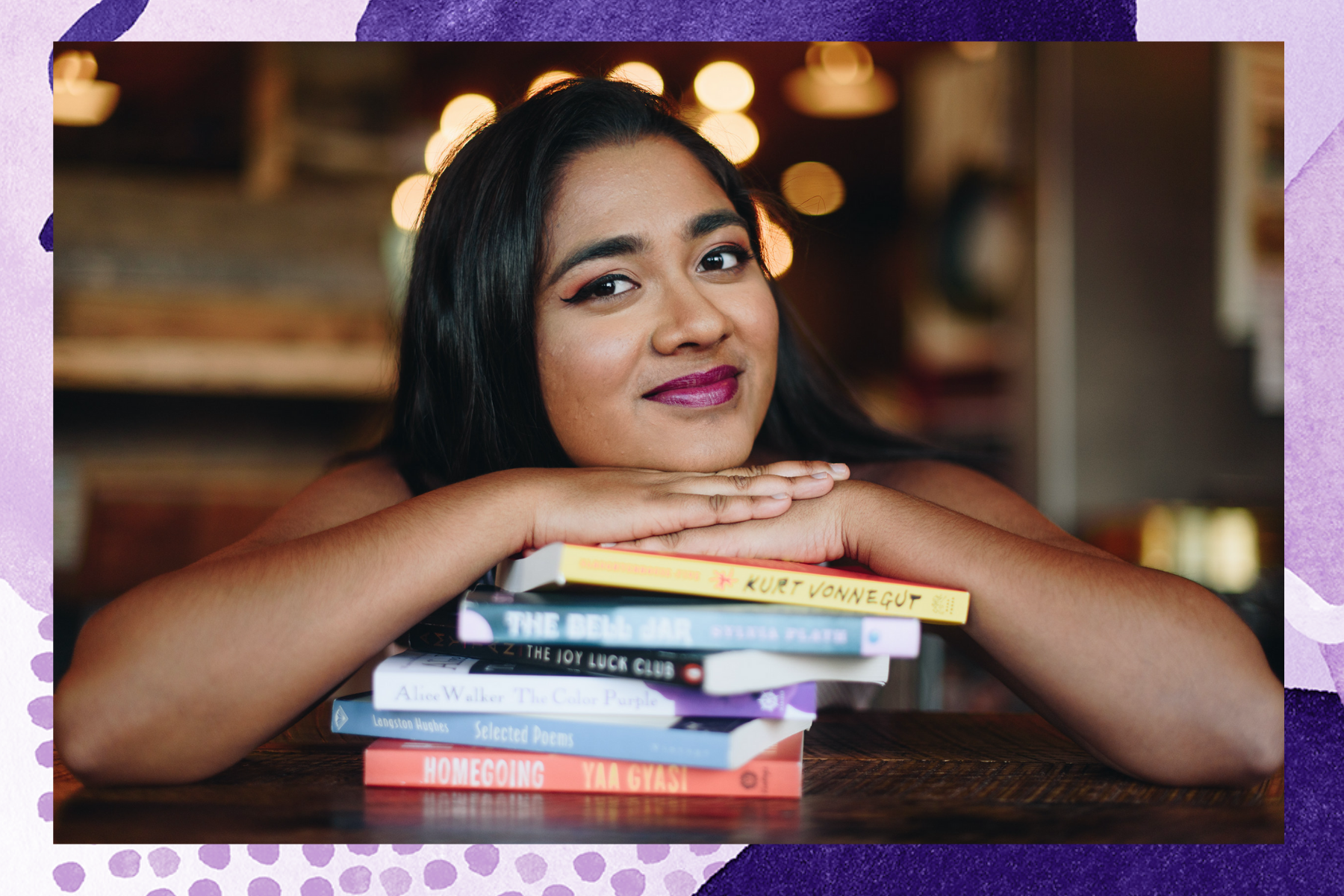 Co-interviewed and written by Sakhi Kulkarni

Twenty-year-old Malavika Kannan is a writer, student, organizer, activist, and self-described “feminist advocate” amongst many other identities. When she was a high-school student, she founded an organization called the Homegirl Project — an organization that works to ensure girls of color everywhere have the resources needed to become leaders in their communities. Kannan originally became involved in activism after the Parkland and Pulse shootings which took place in her home state of Florida. She channeled the rage and hurt she felt into tangible actions, including learning how to talk to elected officials and running a voter registration drive.

She also channeled her activism into words, writing about gun violence prevention movements and her personal experiences with walk-outs in high school in various online publications. Additionally, she wrote her first book called ‘The Bookweaver’s Daughter’ when she was only 17 years old. Currently, she works as a journalist and is writing her second book, a coming-of-age YA novel, while studying at Stanford University. Her YA novel called “All the Yellow Suns” will be published by the summer of 2023.

And luckily for Brown Girl Magazine, Kannan is helping us launch our very own literary vertical to celebrate and share fiction pieces by emerging and established South Asian writers from around the world with her very own original short story called ‘The Banyan Blooms.’ The literary vertical, created and helmed by Brown Girl Magazine’s literary editor Nimarta Narang, will have its exciting launch in early 2022 featuring writers and authors from all walks of life. Narang and Brown Girl’s youth contributor Sakhi Kulkarni had a chance to Zoom with Kannan to talk about her writing, literary, and activism experiences. Along with shedding a few wise words of advice.

“Really work and develop your own set of superpowers first before you show them to the world,” Kannan shares. “Give yourself your best chance by giving yourself all the prep you can. Build a strong community and a strong sense of intention. Don’t rush in before you’re ready,” she says to her younger self, to younger writers, and to all the readers of Brown Girl Magazine.

When speaking with Kannan, it is clear that she was always a storyteller at heart, and has been able to consistently use her voice to advocate for younger women and younger voices around her. The absence of tangible investment in first-generation girls of color pushed Malavika to start the Homegirl Project. She learned that the skills she had acquired through the gun violence prevention space she had been involved heavily in needed to be shared with youth everywhere, and that the lack of civic engagement education in public schools was stopping the new generation from unleashing their full potential as leaders.

“When you are first-gen, your parents haven’t grown up in this country, and they might not be able to guide us, or understand the need to be involved politically.” The Homegirl Project combats this problem by connecting girls of color from all over the country and training them with the skills to make a change in their communities. It is one of the first organizations of its kind. “Oftentimes, when we think of change-making, we are taught a masculine narrative where one person pushes for change on his own, and that one person gets all the credit.” Kannan actively wants to push against such a status quo. “I really like organizations that don’t have a strong sense of hierarchy, and are less about raining gifts from above, which I think is a pretty imperialistic approach and are more about connecting and investing in people’s long-term capacity. I would hope that the Homegirl Project could provide a model of collaborative, communal, friendship-centered organizing.”

Since its inception, the Homegirl Project has helped support hundreds of girls of color and has fostered a community of strong, empowered,  advocates who simultaneously send hype memes to group chats and lobby for menstrual equity in front of their school boards. The Homegirl Project’s fellowship program, in which fellows are matched with mentors to assist them with a project, has been extremely successful, with over 15 fellows participating in the program nationwide. One of the strengths of the Homegirl Project is its community, which has been described as “empowering, healing, and affirming.” Malavika hopes that the existence of spaces like the Homegirl Project, which are for the people, by the people, would inspire people to look at more collaborative models of organizing.

Yet Kannan stresses that her ideal world is one where such organizations don’t need to exist, and instead people can focus on what is truly important, such as friendship, creative pursuits, and self-fulfillment. In the past year, she’s taken a step back from activism, for a variety of different reasons. “I’ve found a lot of wisdom in taking some time to learn and to look to history. I think young people have so much ingenuity, and what we did with the Homegirl Project was peak Gen-Z, like we were able to create an entire collaboration virtually, but there is so much to be learned in looking to older generations and wiser people.”

One of the other reasons to take a step back from organizing is a change in focus towards developing her own voice as a writer and storyteller. Writing stories from the age of two, Kannan was obsessed with epic fairytales and destiny — including Hindu mythology — and immersed herself in the world of storytelling from a very young age.

“Before I could even write, I would dictate stories to my mom and have her write them down for me. I wrote a full-length fanfiction Harry Potter book when I was 10.”

She began developing her idea for ‘The Bookweaver’s Daughter,’ inspired by Hindu mythology and finished a draft when she was 12 years old. She was enamored by fantasy and young adult fantasy fiction.

“In my first draft, all my characters were white. I had set it in a European world. It wasn’t a conscious decision at all.”

Kannan revisited the book in the 10th grade after reading Maxine Hong Kingston’s ‘The Woman Warrior,’ which she describes as a pivotal moment in her journey as a writer. “It was the first time I was introduced to the concept of women of color in literature. These women did not write about white women! What am I doing?” She reworked her plot of a fantasy world, girls using magic and rising up against tyrant kings.

“I thought, how do I write this so I see myself reflected in it?”

She took inspiration from Hindu mythology and the legend and substance about divine female power.

“I decided to make it a pan-Indian fusion world.”

The book won a 2018 National Scholastic Medal and was released through Tanglewood Publishing in 2020.

A similar inspiration of mythology and fantasy can be seen in her original fiction for Brown Girl Magazine. ‘The Banyan Blooms’ packs in incredible imagery and diasporic angst in a way that feels refreshing and unflinchingly honest.

“I wrote it for a freshman year creative writing class. I wanted to tap into the feeling of being disconnected to your culture due to a decision you didn’t make — of breaking your roots and coming to a new country.”

The short story delves into mental illness, intergenerational trauma, and existential rage without ever bordering on the dramatic — a mother travels with her two young daughters from the US to India for the grandmother’s passing.

“I wanted to address the sense of ennui and pain that can manifest in so many ways. In this story, it was manifested in a curse that led to setting a tree on fire.”

Kannan has recently written another book, that she describes as a “queer brown novel set in Central Florida.” For this book — a pandemic project as she describes — she drew from her own life experiences and signed with an agent early this year as well.

“My second book experience was a million times smoother. I felt so supported throughout the process. I workshopped the book with a professor and bullied my friends into reading it.”

The pandemic, in fact, has been a great opportunity for growth for Kannan.

If there is anything that we can take away from this conversation, let it be that applying this notion to your life will put you in a position to achieve extraordinary things, just like Kannan.