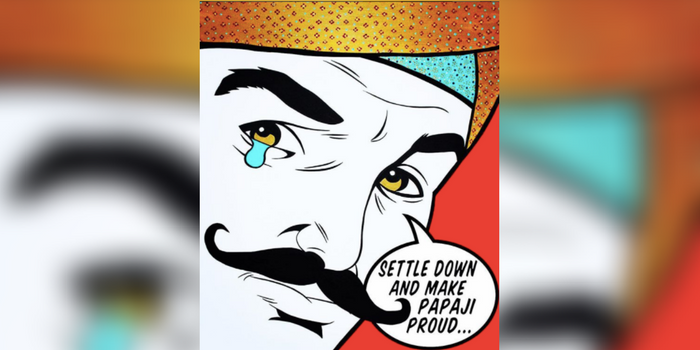 If I had a dollar for every time I’ve gotten this question or its more assertive counterpart – “Soon it will be your turn!” – I’d probably have enough money to pay for my own wedding.

No, but seriously, I’m somehow at that point in my life where everywhere I turn, I see someone getting engaged or married. While I’m completely happy for these people and believe marriage is a wonderful thing, the added pressures of getting married in the Indian community are absolutely INSANE.

As with most traditional (heteronormative) desi households, the topic of boys was taboo growing up. God forbid I ever even mentioned the name of a guy in one of my classes to my parents. However, since graduating college, my mom hasn’t been shy about dropping hints about eligible guys she thinks are cute. The only thing I’ve learned from these interactions is that we have very different tastes, so I don’t think I’m ever going to be interested in a man whose biodata is shown to me. Sorry, mom.

[READ RELATED: It’s 2017, Why Should I Change my Last Name After Marriage?]

Last month, at a wedding reception, this all became too real. Most of the aunties and uncles hadn’t seen me in years, so you knew I was going to get a thorough look up and down. One aunty didn’t even attempt to hide her laser eyes analyzing every part of my outfit or the fact that she seemed interested in setting me up with her son. She was probably even judging me for the mango lassi and paneer tikka I was holding in my hand, but as I always say, if you don’t go to an Indian wedding and eat your weight in food, did you even go at all?

As my cousins and nieces in India are getting engaged and married themselves, I feel like there’s a looming cloud over my head of that reads “unwedded female,” who probably isn’t getting married anytime soon and for a valid reason. I worked my butt off in school to be at an Ivy League graduate institution and pursue a lucrative career in New York City. Yet, why does it feel like none of my personal successes are valid until I get married? I am proud to be an independent woman who is willing to find a companion when the time is right. I wish South Asian culture embraced educated, driven women who make these decisions for themselves.

I don’t blame our parents and elders for having this mentality, for patriarchy and the values of family and marriage have been engrained in South Asian societal structures for centuries. These tenets sit on a pedestal in our culture, proliferated widely throughout Indian cinema. Even films that tout themselves as being “feminist” or “non-traditional” still inevitably highlight the importance of marriage in everyday life.

[READ RELATED: A Board Game About Escaping Arranged Marriages Exists and You Need to Play]

Take the recent films “Dangal” and “Sultan” for example. Not only do both films star Khans and deal with wrestling, but they also portray the complexities of marriage despite being advertised as sports dramas. Each of these movies could have focused on the physical, technical aspects of the sport that the protagonists play, but to me, they also depict the submissiveness of a wife to her husband and how the husband’s happiness and success are inextricably tied to the wife’s.

Let’s look at Anushka Sharma’s character in “Sultan.” She leaves Salman Khan’s character when he puts his sports career above their marriage, but then they are both miserable without each other so – spoiler alert! – they end up reconciling at the end. I’m all for a sappy, heartwarming conclusion and seeing lovers reunite, but isn’t there more to the story than what’s shown on the big screen?

While I love Bollywood, it’s storylines like these that will continue to reinforce the traditional social structures and relationships that South Asian households cherish. Honestly, it’s a vicious cycle – we perpetually adore these films and they continue to portray what we want to see (and dream about). Apart from the handful of political/thriller/horror/sports drama films released in Bollywood and other Indian film industries, I’d like to say that about 99 percent of the “typical” film ends in the protagonists getting married or engaged to be married (and usually, at a pretty young age). I hope that by the time I do have children on my own (after getting married on my own time and volition), fighting such stereotypes and urgency will be an issue no more.