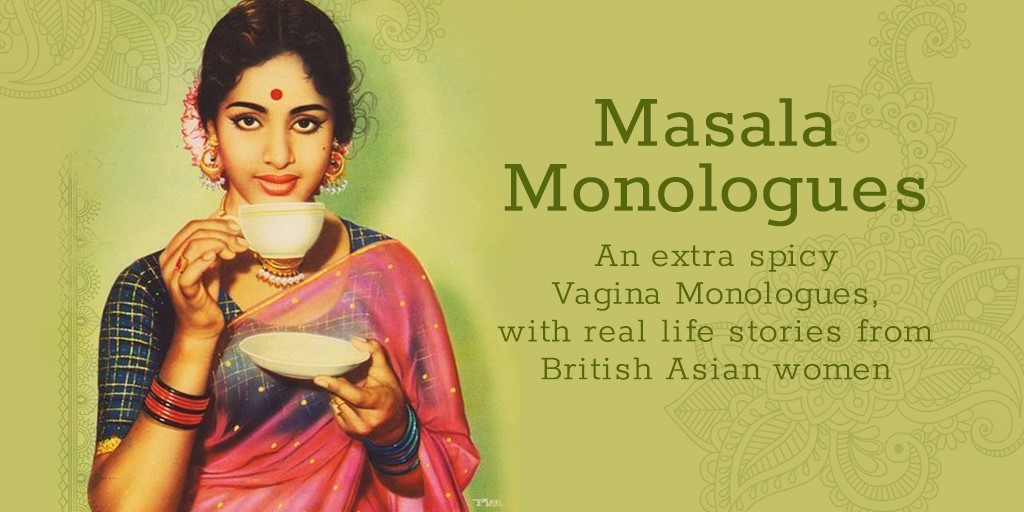 Pillai, born into a traditional Keralan family, grew up in a slum in Mumbai. She says,

This isn’t an exaggeration or being said for effect – the life I live now is very different from the one I was born into.

She describes the battles she has fought to get to where she is today, as she was the first girl in her family to have a job. It is her passion and devotion to reading, travelling, and feminism that have kept her going over the years.

She established a career in advertising, before moving to London in 2005. After working as a copywriter, Pillai eventually made the decision to start her blog. Pillai‘s motivations for creating the “Masala Monologues“ was to be able to tell South Asian stories. She believes that talking about the inner power of South Asian women feels like her life’s work.

The lack of spaces for South Asian women to speak freely was what drove her to create her own. In Pillai’s view, it is both the restrictions of Asian culture, as well as the fact that Western cultures have historically viewed brown women either through the lens of asexuality or fetishisation, that this is the case. But the main problem is the shame and taboo that South Asian women are made to feel on issues related to sex.

From an early age, we’re taught to guard our bodies. We’re told sex is for men. That we ‘put up’ with their sexual demands. We’re never taught to see ourselves as independent sexual beings, deserving of orgasms and fulfilment.

Pillai is not exempt from the taboos she is working hard to defeat. Whilst her friends love what she does, her dad and other family members don’t even know about her Soul Sutras blog or the monologues. It would upset their traditional mindsets, she says. Even her brothers, though supportive, avoid talking about it with her.

She refers to the wide-ranging themes of the monologues she has received as a ‘tapestry’ — varying from sad to sexy, and from weird to angry, the stories cover all aspects of life and are not just limited to sex or sexuality. For South Asian women, it can never be simply about sex or vaginas. Our culture extends much further into our lives. As a result, Pillai explains, there are many differences between the original “Vagina Monologues,” and the “Masala Monologues.”

The Masala Monologues take things far beyond the vagina — stories of coming out, coming of age and going through puberty, travelling as a woman and so many more rich and complex examples are mentioned. These stories are much richer and multilayered because they reflect our often complicated lives within the South Asian culture.

Pillai believes that the monologues provide a wonderful support network and sense of sisterhood, allowing South Asian women who have felt alone, to realise they are all fighting similar battles. All it takes is for women to start feeling empowered enough to share their stories.

In this vein, I asked her what it was like working with the women telling their stories. Were they hesitant or fearful, or ready to share? Understandably, it is a slow process, but eventually, they open up and “magic starts to happen.” She says women are constantly contacting her in order to get their stories out there too. When she was starting out, she says, it felt like uncharted territory, a topic that no one else had yet wanted to broach. But she is heartened by the steady rise in South Asian voices tackling difficult cultural topics. It’s a movement that shows no sign of slowing down any time soon.

The “Masala Monologues” are in the process of being converted into a theatre performance. There’s already a director on board and Pillai is in the process of talking to actors and theatres. She hopes it will all be ready for next year! The theatre performance is not the end of the road though — Pillai feels strongly that this is only the beginning of a much larger project.

There are no end dates, just lots of beautiful stories that come to life over the years. I hold regular writing workshops for Masala Monologues. The idea behind these is to create a warm, supportive space and provide monologue writing tips to the participants, which enable the stories they carry within themselves to spring to life.

I for one will be keeping a close eye on upcoming ticket sales for the incredibly timely theatre production of the Masala Monologues, and it’s clear that Pillai is set to be a leading figure in a movement that’s already breaking down barriers.