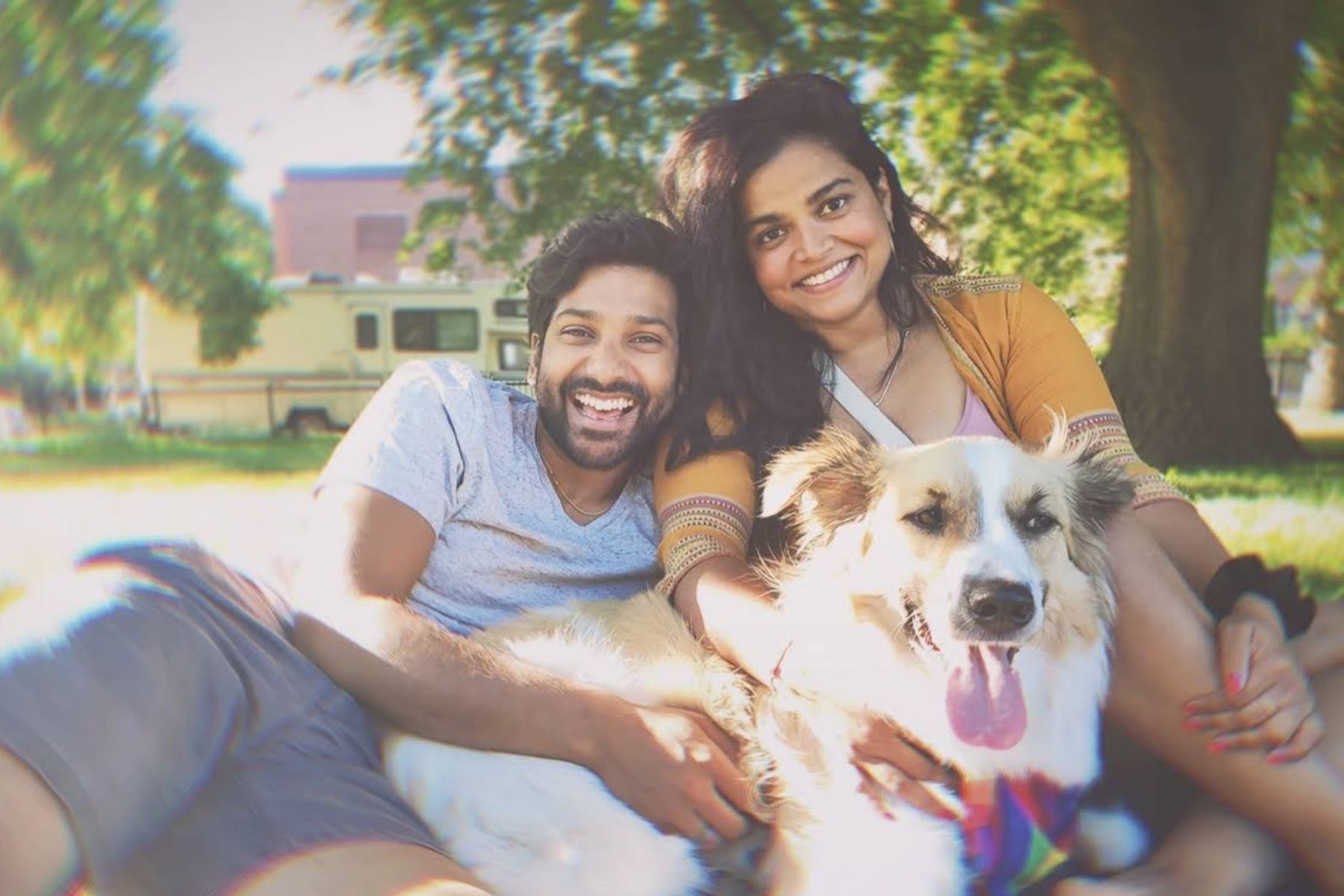 The #vanlife hashtag has amassed over 12 million photos on Instagram. But what is apparent upon scrolling through these carefully-curated images is the lack of diversity, specifically when it comes to South Asian travellers. Smriti Bhadauria and her partner Kartik Vasan, who together form the YouTube and Insta duo The Brown Vanlife, are changing that. The couple tied the knot prior to the pandemic, then hopped into a campervan with their pup Everest to slow travel from Toronto to Patagonia. They’ve since made their way through the U.S. and Central America, and plan to head to South America this year.

I caught up with Smriti, who goes by Sim when the couple was in San Jose, Costa Rica. Here’s what she had to say about their transition from condo to the campervan.

When Sim moved to Canada as an international student at eighteen, her friends introduced her to hiking. “I remember finding a ridiculous amount of peace,” she reminisces, recalling her initial encounter with the outdoors. Among Sim’s other inspirations? “Swades” — the hit 2004 Bollywood film — as well as the 2014 BBC article featuring Gunther Holtorf, a man who traversed the globe in his G-Wagen. She recalls the surge of inspiration that struck when she heard of his story. “I read that article and felt something very powerful,” Sim says. “I was like, ‘This has to happen to me. I don’t know how it’ll happen, but it’ll happen to me.’”

A couple of years later, when Sim and Kartik met, she brought up the idea of embarking upon a Pan-American road trip. Given Kartik’s multinational upbringing — his parents work for the Indian embassy — he was more than game. The couple began going on weekend camping trips and unplugging, exposing themselves to the basic tenets of nomadic living. They set a goal of preparing themselves for 4-5 years before heading off.

Warming their parents up to the idea, though, was its own process. “Family is so important to us,” Sim says. “We never wanted to make them feel like we cheated them.” So Sim and Kartik, in an effort to not overwhelm their parents, introduced the concept to them in small increments. Unsurprisingly, their folks’ initial reactions mirrored the concerns of many desi parents. “They said, ‘What do you mean? Why do you need to live in a car? Like, are you homeless? Are you poor? Do you need money? What’s going on?’” Sim chuckles.

But as the couple began building the interior of their 1977 Dodge campervan — spending upwards of 10 hours a day à la YouTube tutorials — they saw it as an opportunity to involve their parents. With each win — for instance, a countertop built— they gave their folks a FaceTime update. Eventually, their parents did warm up to the idea and gave the couple their blessings. But with one condition: marriage. Sim and Kartik happily obliged, celebrating their nuptials a month shy of the pandemic, a final hurrah with their loved ones before worldwide lockdowns.

When the pandemic hit, and their plans felt up in the air, Sim and Kartik’s motivation took a dip. But still, they pushed through and hunkered down on their van project. By July 2020, the couple and their pooch were off, ready to soak in whatever this new lifestyle had in store.

Lessons from the Road

Though the vast majority of the couple’s interactions have been overwhelmingly positive, they haven’t been spared from “in your face” racism, particularly while traveling through the states in the first months of their trip. Sim recalls a frightful encounter with an armed man while the couple passed through Oregon and several instances of blatant rudeness from cashiers and waiters. “That was very heartbreaking,” Sim tells me, solemnly. But rather than succumbing to the force of these injustices, the couple saw it as a chance to show up “as [their] real brown selves.”

That’s where the overall purpose of their journey began to change. Sim says, “Before it was, ‘Oh, we’re going on a world tour and we’re gonna live our life.’ And now we’re like, ‘No, no, no. We have a bigger thing to solve here. We have to represent. We can’t just pass through. We have to make noise.’” At their majority-white campgrounds, Sim and Kartik began seeing their desi roots as an opportunity to bridge cultural barriers. Sim took it as a chance to introduce new acquaintances to the wonders of rajma, dal and chole. The couple even celebrated Diwali, adorning their campervan with flowers and diyas, and carrying out a pooja. As a result of Sim and Kartik sharing these aspects of their culture, people began warming up.

Even as a brown person, Sim was shocked at how much-preconceived notions influenced her initial perceptions of a country. “I did not expect that from myself,” she says. “You know, coming from India, how can I be scared in Mexico?” She’s learned that it’s best to go in with an open mind and not buy into common judgments, which tend to skew negative towards the countries in which they’ve traveled.

Sim mentions the warmth of the Latin American locals, sharing the couple’s intentions to compile a “mini-documentary of kindness” based upon all the hospitality and unconditional support they’ve received from strangers. When the couple was in Mexico City, for instance, a local family practically adopted them when they were going through difficulties. What ensued was a heart-warming cultural exchange, which allowed Sim and Kartik to experience Mexican Independence Day and share delectable meals with their new pals.

Sim notes the common thread that links humanity. “No matter how different we are,” she says, “all we’re seeking is some joy out of life.”

Though many misconstrue long-term travel with idyllic strolls along beaches and hours of idle time, Sim is here to debunk that myth. Prior to embarking upon their vanlife journey, the couple ensured their professional lives were on solid footing. Both transitioned into remote freelance work in 2017 — Sim in marketing and Kartik in IT — and built up a solid clientele. Their secret to retaining a loyal client base throughout all this time? “Overcompensating and overdelivering,” Sim stresses. It can be easy for employers to blame the couples’ nomadic lifestyle for any mistakes that should occur in their work, so they put in maximum effort to show their devotion to their professional lives. Sim mentioned the fact that they maintain a schedule most days — from 6:30 A.M. to 1:30 P.M. — and then use the remaining hours to explore and engage in content creation.

Furthermore, the couple is always learning, aiming to better themselves in their respective fields. This translates into their travels, as well. Since technology and infrastructure are more precarious in Central America than in the U.S. and Canada, Sim and Kartik have to remain cognizant to ensure all goes well. “I’m telling you, there’s such a micro-level of planning that goes into our lifestyle,” Sim says. But still, “… we’re so excited for it. It never occurs to us that its extra work.”

Sim’s glad that she and Kartik can be a reference point for others wanting to pursue this way of life, especially since the two felt lost in the early stages of their own preparations. She hopes that their story will encourage others to break barriers.

When I asked Sim what advice she has for South Asians hoping to follow suit, she said, “Being a brown kid, you grow up in the environment of ‘this or that.’ Either you choose a career or something else. We’re never taught that there’s a possibility of finding a balance.” But if the couple exemplifies anything, it’s that not only is balance possible, it’s absolutely necessary to get the most out of this life.

Sim, Kartik and Everest plan to hit Panama and South America next, with Colombia as their next big country. For now, they’re reveling in their vanlife journey and aren’t putting too much weight into future planning. But they do envision themselves doing a Eurotrip with their beloved camper van, and see this as a lifestyle they want to maintain for the long term. Until then, they will continue “bringing flavor to vanlife.”

Whether you’re a veteran vagabond yourself or more of an armchair traveler, you won’t want to miss this vanlife couple’s Sim captivating photos and videos from the road. Be sure to follow them on Instagram @thebrownvanlife and on their YouTube channel.

Brina Patel is a Sacramento-based freelance writer. Brina's work has been published or is forthcoming in LA Family Travel, LEVITATE Magazine, The Mighty, and Better Humans. When Brina is not putting words to the page, you'll find her hiking near her Northern California home, curling up with a tear-jerking memoir, or spoiling her sassy Maltese.