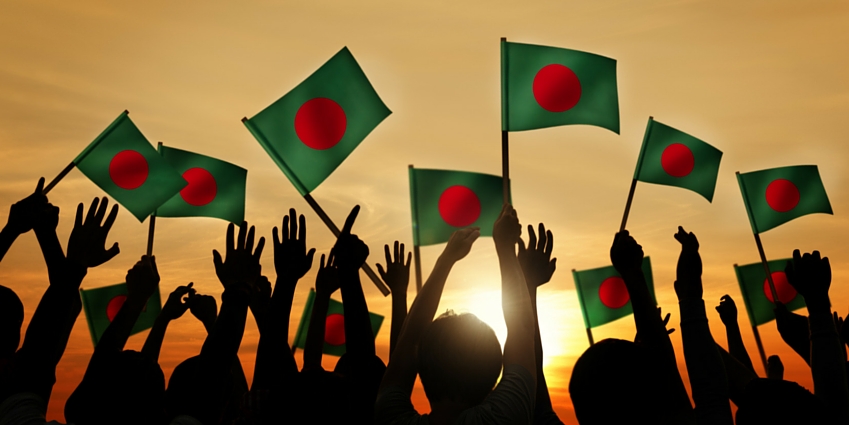 For Bangladeshis, it’s not just about BNP or Awami League, Dhaka or Chittagong, Islam or Hinduism. Yes, Bangladesh is a diverse nation. With 171 million people, you will find every flavor of Bangladeshi under the sun. And, we will always connect with each other, regardless if we live in Rajshahi or Rochester.

Our language, Bangla, was considered so valuable by our ancestors that they spilled their own blood to preserve and cherish it. Our mother language is as much a part of our culture as eelish mach bhaja, a curried fish fry, over steamed white rice. Bangla’s silky smooth vowels and consonants can roll off a speaker’s tongue like water over a smooth stone. There’s an inherent connection between each and everyone one of us because we all lay claim to a piece of Bangladesh’s rich history, culture and spirit.

Even though we’re constantly overshadowed within the immigrant South Asian communities by our Indian and Pakistani comrades, we’re still proud of who we are as a people. It actually makes us stick together even closer.

Those of us who’ve moved away to find better lives and futures in other parts of the world have wanted a connection to our past. Thus, we find the overwhelming urge to continue the Bangladeshi Diaspora. Even so, when I was picking out college cities as a senior in high school, I picked Atlanta. I was longing to be a part of a Bengali community that accepted me and took me in like family.

And in joining the Bengali Student Association (BSA), my South-Asian based sorority, and meeting all types of new people in my new city, I finally found that community. There’s a connection that I feel with each and every one of its members that I don’t really get with my other South Asian friends.

Yet, when Bengali’s share their happiness and love with each other, they will also share their grief. When one person hurts everyone else does too. When I heard that two of the victims in the café attack in Dhaka about a week ago, were students from the nearby Emory University, I was crushed. They lived so close to me.

The BSA of my school is close to Emory’s BSA, and when the latter reached out to tell us about their loss, the members at my school were heart-broken. We were so hurt that the victims, Faraaz Hossain and Abinta Kabir, were just one or two degrees of separation from each of us. They were students, learners just like me and the rest of my friends. Hossain and Kabir could’ve been any of us. I, a friend of mine, or my cousins could’ve been visiting our families this summer and accidentally end up in Gulshan at the wrong night.

Furthermore, an attack on one of us is an attack on all of us. Thus, when the assailants took over the café and terrorized all those innocent people in the name of a religion they didn’t even understand, they attacked all Bangladeshis. When some of us hurt, we all hurt. And when one of our own is in trouble, we try to look out for them. Hossain stayed with his friends in the bakery, even though he could’ve save his own life by escaping. He refused to leave, because Kabir and another friend/victim, Tarishi Jain, was held captive.

Ironically, as the whole attack was being televised, I was bombarded with emails, messages in group chats and snap chats, asking if I was okay and if I was in Bangladesh that day, if my family was hurt. Thankfully, neither I nor my family, both in Bangladesh and out, were in danger.

However, I was hurt to hear a friend tell me that he was on a phone call with family right when the attacks happened. He could hear the gunshots in the crossfire between the assailants and the police in the background. This friend’s family had to move homes because they lived in a Gulshan apartment across the street from the Holey Artisan Bakery. They were so terrified and traumatized that they couldn’t bear to live in such a triggering place.

My heart breaks for my friend, his family, and the other people who had to experience such violence, especially in Ramadan, the holiest month of the Islamic calendar. We were days away from Eid, and putting up with this much evil and pain during a time of prayer and solemnness is barbaric. If these types of attacks happened days before a holiday like Christmas or Yom Kippur, then would the world wake up and see brutality of the Holey Artisan Bakery attack?

In spite of all of this, Bangladeshis from all over the world came together to support each other and move on from this tragedy. We had to stay strong. I remember my mother telling me that this is all a test from God. Would we break as a people or would we overcome our collective hurt?

I especially wanted to focus on the victims of the attack. I didn’t want my mind to be clouded in the pictures of the assailants smiling disturbingly in Daesh (wrongly called ISIS) garb and the Islamophobic, xenophobic and racist trolls, in the comments sections of news outlets and Twitter tag feeds.

But as soon as we were recovering from one blow to our community, another blow came in its wake. A group of terrorists attacked a police checkpoint with homemade bombs, as they were on their way to further terrorize an outdoor, mass Eid prayer.

During the two main Islamic festivals, Eid-ul-Fitr and Eid-ul-Adha, it’s normal for impromptu prayer areas to spring up in order to accommodate all the worshippers. Going to Eid prayer is actually a highlight of mine and numerous other Bangladeshi Muslims’ childhoods. It marks a time of celebration, for the physical culmination of piety and good human behavior.

The attack was especially hurtful because this was a religious safe space that’s intended to facilitate positive experiences and social interactions. People go to Eid prayers expecting that they’ll be safe, that even the coldest of criminals will have the decency to leave people alone to pray in peace. Yet, I don’t think the attackers could have had a conscience. They did the deeds of true psychopaths.

At this point, I’ve run out of adjectives to describe how heartbroken and dejected that I am. Thesaurus.com can’t really give me the words to express my angst and anxiety at the social climate of Bangladesh. I know my country is secular and accepting. After all, some of the most open, forward-thinking, and loving people I know are Bangladeshis.

It’s a disgrace that these people claim these identities, but I’m equally peeved at the Bangladeshi government’s response. I feel as if the current administration is trying so hard to distance Bangladesh with any ties to Daesh that they will go to all lengths to keep the connection as far as possible.

I think what’s important is to remove power from Daesh, but calling it that name and not the Islamic State or ISIS or ISIL or IS. They do not speak for all Muslims, in the same way the Westboro Baptist Church doesn’t speak for all Christians.

Moreover, we have to be vigilant in keeping them away from vulnerable people. It’s more common for Daesh to seek out people who are going through rough times or may be in need of some type of movement to get behind.

Also, they absolutely hate it when people, especially women, speak out against them, very openly, in Muslim majority areas. Though this may sometimes be met with backlash and violence, we cannot let our voices be drowned out by a select few evil people who want to burn down the very institution they claim to want to protect.

I don’t want the beauty, diversity, and openness of Bangladesh and Bangladeshi culture to be overshadowed by the actions of Daesh or another extremist group that seeks to wreak havoc upon the fabric of society. I think we’re better than that, and I also think that we can build ourselves up from this. No matter what, Bangladeshis have always recovered from whatever bullshit that comes in our way, and we can still grow in a positive way in light of the tragedies that plague our people and others.