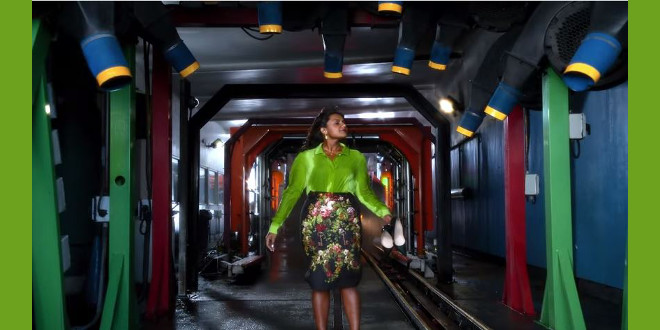 Granted, the Super Bowl feels like ages ago and football season is officially over, but the thought of Mindy Kaling starring in a Nationwide commercial airing during the game’s prime time is something I cannot let go of. Even though, I am one of those who does not care for the big game, more for the wings and company, I was especially excited to watch the much-hyped 30-second commercial.

The commercial featured Kaling as an “invisible” woman who openly embraced it and started to do all sorts of ridiculous things.

After years of being treated like she was invisible, it occurred to Mindy Kaling she might actually be invisible,” the narrator said.

We saw Kaling gobbling ice cream from the container at the supermarket, stretching naked at the park, walking through a car wash with foam duds on her face, and trying to kiss Matt Damon (at which point, she realized she wasn’t invisible).

Proof I’m not invisible. Just look at how into me he is! @Nationwide #InvisibleMindy #SuperBowl pic.twitter.com/94IdS4PWdY

As usual, I loved seeing Kaling on TV and her bright lime-green blouse and high-waisted floral skirt ensemble, but was left wondering about the commercial’s message. I guess the point was that non-Nationwide customers feel invisible, but if you’re a Nationwide customer, then you receive top notch attention. But, could I be the only one wondering why choose Kaling, the first-ever South Asian American woman to write and star in her own sitcom, “The Mindy Project,” as the spokesperson?

[Read Related: ‘The Mindy Project’ Recap ‘No More Mr. Noishe Guy’ and ‘Dinner at the Castellanos’]

I hate to ask this on a platform that tries to prove otherwise, but are minority women really seen as invisible in everyday life and media? Am I overthinking a Super Bowl commercial that seemed to be lighthearted? Can any ad with the song “Pretty Woman” in the background have underlying negative racial undertones?

Isn’t it dangerous to think that people of color are invisible when often the opposite is, in fact, true?

Kaling herself would probably think this commentary is overreacting. She has repeatedly said she does not want to be considered a female Indian comedian, but simply a comedian. Even poking fun at media outrage over perceived racism, she recently tweeted, “We had the worst Indian food for dinner at work, but I feel like I can’t say it sucked ’cause then I have to do a panel about it or something.”

[Read Related: Mindy Kaling Fires Back About The Lack Of Diversity On Her Show At SXSW]

If Mindy doesn’t care, should we? As I said to my friend when we first saw the commercial, I’m still surprised a dark skinned, not skinny, Indian woman is even on television, let alone in a commercial during the most widely watched sports event in the country. Maybe that progress is enough to celebrate for now.