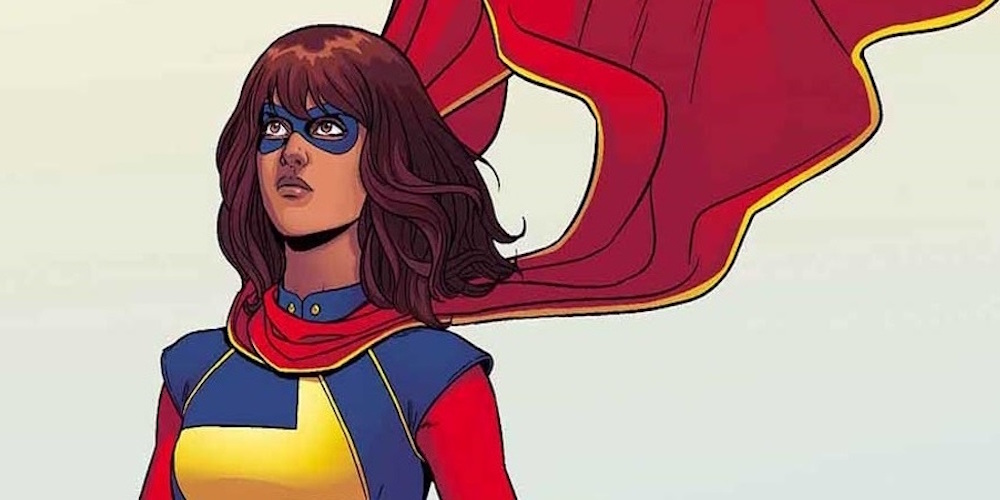 Kevin Feige announced this past week that he’s working on “plans” for Ms. Marvel. And I shed a tear.

I have been reading the Ms. Marvel comics since they came out. I have laughed, cried, gasped, and have felt so attached to this superhero.

Kamala Khan is a 16-year-old high school student in New Jersey. She’s Pakistani. She’s Muslim. And she has superpowers! Kamala is a polymorph. This means she can physically change into anything and anyone. She can stretch, flatten, deform, or compress her body or parts into anything she wants. She is known for making her fists super huge so she can deck villains easily, along with this, she can heal super fast, and physically change her appearance to become anyone.

Kamala gained her powers because she snuck out of the house to go to a party. I’ve snuck out of my house hundreds of times and, GOD, why did this never happen to me??

Here are some things I hope to see come to fruition if Ms. Marvel gets real screen time (and preferably, eventually, her own standalone movie!):

We meet Kamran in issue #2, Crushed. Kamran is introduced to Kamala as an old family friend, they hadn’t seen each other in years and he turned out to be super hot. He’s attending MIT, has his shit together, is family oriented, and knows all of Amitabh Bachan’s movie and songs. We all fall for him. But SPOILER ALTER, then he ends up being a bad guy! Just read the comics, you guys. I have fallen for so many Kamrans!!!!

As I’ve grown older, I’ve learned that the partition was damaging to hundreds and hundreds of families across Pakistan and India. It was never just about yelling “Pakistan Zindabad!” or “Jai Hind!” — while it might be a day of celebration and happiness. We were never taught how it ripped families apart from the only homes they’ve ever known.

3. The Struggle of Falling in Love with a Non-Muslim

Everyone, meet Bruno. Kamala’s best friend, tech genius, and all around everyone’s favorite. Bruno is totally in love with Kamala. But of course, she doesn’t realize it until it’s too late. My heart still hurts from this unrequited love, y’all.

4. This Whole Thing with Her Dad…

…Because it made me cry in the middle of Barnes and Noble.

I’m not explaining anything to you all anymore. Please go read the comics.

Tweet about this, share this with your friends. We need to let Marvel know how badly we need this movie. Ms. Marvel, aka Kamala Khan, means so much to me and millions of other girls who look like me.

From the Urdu being written out in MARVEL COMICS… Her parents being just like mine, just like so many of ours. Kamala going to the masjid and experiencing the same problems as me. Living this Pakistani-Muslim-American life has never felt so validated until I started reading Ms. Marvel.

[Read Related: “Kamala Khan As ‘Ms. Marvel’ Is The Greatest Thing To Happen To Pakistani-Muslim-Americans”]

Never in my life would I have imagined this would be happening, a Pakistani-Muslim superhero on the big screen.

Also, tell Marvel to cast me as Ms. Marvel because we’re twins.

Thank you all, fingers crossed, and happy reading!