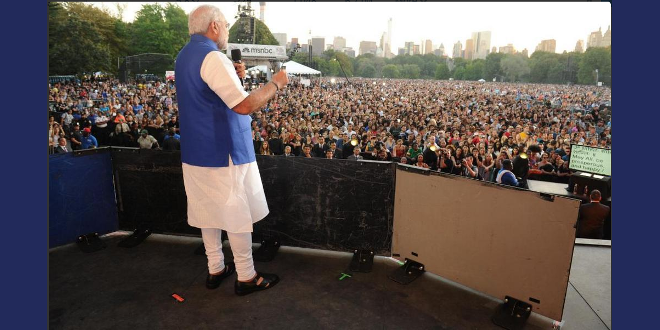 If you haven’t heard or seen, Indian Prime Minister Narendra Modi is visiting the U.S. until Sept. 30. Modi was greeted like a rock star in New York City on Sept. 26 by a large crowd of people, just before he began to check-off items from his jam-pack itinerary, that includes (ed) a trip to the 9/11 memorial, a speech at the United Nations general assembly, a one-of a kind gathering at Madison Square Garden to address 18,000 Indian-Americans, a private dinner at the White House with President Barack Obama (even though Modi will be fasting), breakfast with 11 chief executives, including Pepsi Co.’s Indra Nooyi, and much more, but nothing beats the memorable seven minutes he spoke at Central Park on Saturday.

Not only did Modi wow the crowd with his English, but he also chose a unique place for an elected official with his caliber and power: A musical concert held with the goal to end poverty and provide education and basic sanitation to all. The third annual Global Citizen Concert, which took place on the Great Lawn at Central Park, saw 60,000 attendees, numerous speeches from charitable-foundation executives, heart-rending videos about those suffering from poverty, and performances from big names, including Jay Z, Carrie Underwood and Tiesto, to name a few.

The highlight of the evening (at least for every Indian-American) was actor Hugh Jackson introducing Modi to the stage, among thousands of youth, where the Prime Minister confidently invoked a feeling of “can do” that resonated with the concert’s mission. After listening to the roar of claps and cheering during Modi’s speech, it’s no doubt, he makes headway in the U.S. as a true world leader.

Below are parts of Modi’s 7-minute memorable speech at Central Park, NYC:

How are you doing, New York? I hope, you are having, a good time.

Namaste, my greetings to all those watching on TVs, laptops, tablets and phones, as well.

This is a great city. It has assimilated the world in itself. Today you have shown that you also care for the world outside.

I am truly delighted to be here, in the open Central Park and not inside a closed conference room. Among the youth, because, you are the future. What you do today, will decide our tomorrow.

I feel a current of hope in this park. Among you, I feel confident about the future. You are touching the lives of those who are not as fortunate as you are. What an admirable act this is. What a sacred mission for you to think about those who are far, whose faces you have not seen whose names you do not know, whose nationality does not matter to you.

For you to convert your thoughts into action and devote your time and energy so that others may have a better future too; those living in poverty without education, without basic sanitation, without opportunity, and worse, without hope. I salute you. I feel proud of each one of you. I am sure your families, your friends, your nation feels just as proud.

Some believe that the world changes with the wisdom of the old. I think that the idealism, innovation, energy and ‘can do’ attitude of the youth is even more powerful. That is my hope for India too. 800 million youth joining hands to transform our nation. To put the light of hope in every eye and the joy of belief in every heart, lift people out of poverty, put clean water and sanitation within the reach of all, make healthcare available to all, a roof over every head.

I know, it is possible because I feel a new sense of purpose, energy, and will in India. Because India’s youth can see that you are joining hands with them. Because I believe that we can speak with one voice, for one future.

That, is why, I am here. Because, I believe in you.

Let me end, with a few lines in Sanskrit, that inspire me personally:

Thank you once again for having me over. Thanks in particular, to Hugh Jackman here. God bless you all.

May the Force be with You.