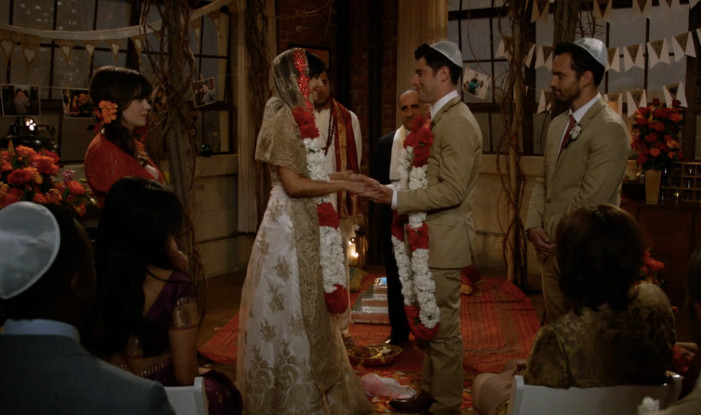 Schmidt and Cece’s beautiful Jewish-Indian wedding finally took place in season five’s finale of FOX’s “New Girl.” The episode, “Landing Gear,” was a roller-coaster of emotions and paved the way for an intimate, heart-filled marriage ceremony between Max Greenfield’s Schmidt and Hannah Simone’s Cecelia Parekh. The couple has been engaged on the show for the season’s entirety, with each episode building towards the finale.

In the penultimate outing, “Wedding Eve,” maid-of-honor Jess (Zooey Deschanel) and best man Nick (Jake Johnson) host a rehearsal dinner, which goes well. We find out that Schmidt’s mother is staying in their loft with her girlfriend, and by the end of the episode that the two women are engaged. This causes Cece to finally breakdown because her mother refuses to show up to the wedding since she disapproves of Schmidt. In order to make her happy, something he vowed he would do, Schmidt leaves for Portland at the end of the episode to bring her mother to the wedding. The other big events in the episode included the return of guest stars Megan Fox and Damon Wayans Jr , Winston (Lamorne Morris) and Aly’s (Nasim Pedrad) exchange of I love you’s, and the break-up of Jess and her boyfriend Sam (David Walton)—who also makes her realize she is still in love with Nick.

[Read Related: Mindy Lahiri Finally Explores Her Heritage, And Now We Love Her Even More]

In the finale, we begin with Schmidt’s plane being stranded on the tarmac unable to take off, which obviously causes him to panic because his wedding party is almost about to begin. Meanwhile, Cece takes Sam’s side to make her best friend realize her true feelings. This only lasts till she finds out where Schmidt is—and then, naturally, she freaks out but also appreciates the sweet gesture. This noble act all ends up being in vain anyway because her mother shows up all on her own. It is revealed that Schmidt has actually been leaving Cece’s mother voicemails for the past year, and despite them being corny, they are also romantic—and convince her mother that these goofballs are really meant to be.

As the party continues, Schmidt joins in all the fun through video chat. We finally see Cece’s wedding dress, an elegant cream dress with golden patterns paired with an even more stunning dupatta draped around her.

The time for the wedding comes and goes, but Schmidt is still a no-show because the plane delays him even more. When he finally does reach the loft, it’s super late and he is exhausted. The gang, however, has other plans—and they throw a cozy, impromptu wedding for the two lovebirds in the loft with only their friends and family.

Cece’s mom walks her down the aisle as she drapes the dupatta around her head. Jewish and Hindu priests conduct the ceremony side by side and the couple not only exchange vows and rings but also make each other wear a garland, as is done in Hindu weddings.

In the season two finale of the show, which featured an almost wedding for Cece to Shivrang (Satya Bhabha), the ceremony was more typically Indian, with a mandap and everything. However, since it was an arranged marriage and Cece didn’t really love him, she stopped the ceremony just in time—and that’s a good thing, or we would’ve never seen Schmidt, Nick, and company, dance to these tunes in the season five opener:

It’s exciting to see shows featuring Indian-American actresses embrace their culture in any aspect they can, and this “New Girl” wedding is a great example of that.