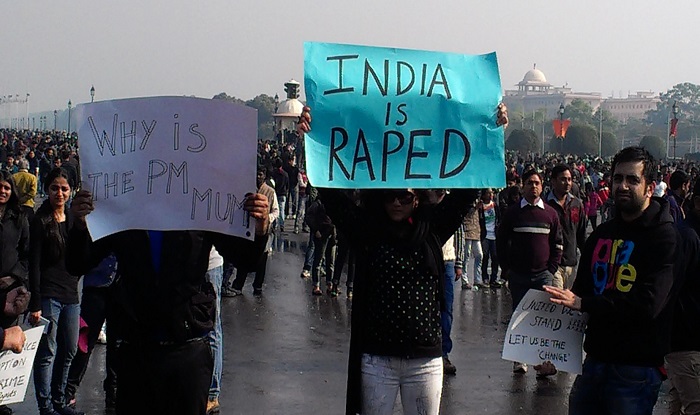 A lesson in male ownership.

Dec. 16, 9:00 p.m. South Delhi. Twenty-three-year-old Jyoti Singh Pandey is brutally raped on a private bus by six men and a metal rod, pulling her intestines from inside her. The youngest of them was 16. Ten days later she dies and my country is plunged into darkness.

Seven-thousand-two-hundred-and-ninety-nine miles away I pass the news on my way to the kitchen. I hold the shattered pieces of her in my arms.
Horror spills forth from my lips, frothing at the mouth
My stomach claws its way into my throat
The world erupts in anguish

All the while, I cannot cleanse her blood from my sweaters.

They call her Nirbhaya in the press.
Fearless one. Her bravery is commemorated in the candles at India Gate

How brave she was to venture out her home for a movie.
How brave to get herself an education.

She should have known,
that vultures roamed the streets,
that they were hungry for her,
craving for the blood of a “modern woman.”

Her parents publish her name in the press and
a media storm erupts,
a country,
aghast by a family that does not place its value on its daughter’s
lost hymen.

On the other side of the world
I can still hear her whispering to
the hospital attendants
begging to be cleansed of the filth before she dies.

Three months later her assailants say they are not sorry and everything feels slick with the weight of her blood again.
This country which cannot protect its woman
spilling its own misogyny into the streets,
as the roads of my home still dripping with her blood.

I see her every time I open the door.