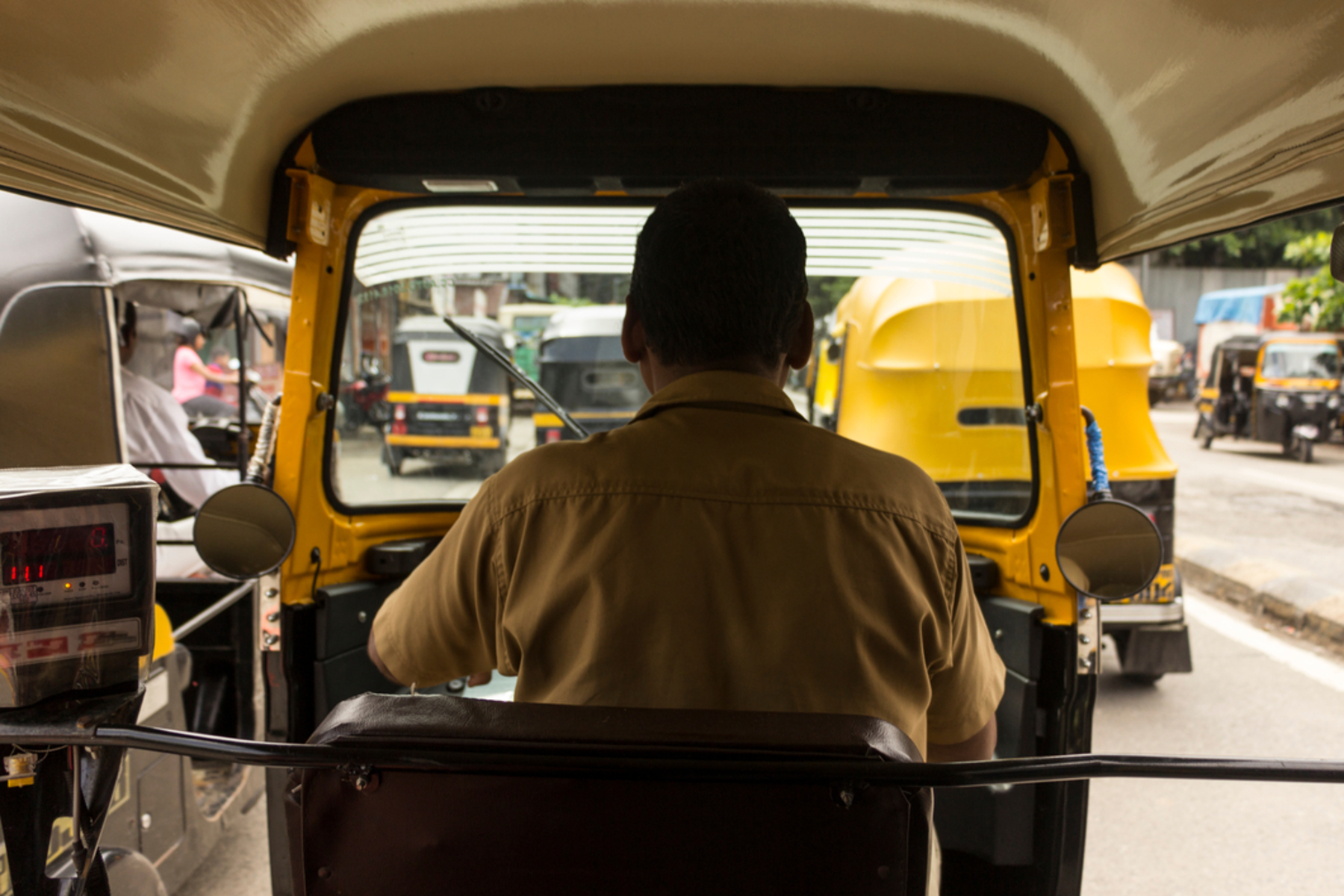 An autorickshaw in Mumbai, India | Photo by YAYA Stocks via Shutterstock

The sky roared and the rain intensified. It poured in gigantic drops, sideways, instead of straight down. We weaved slowly through the narrow lanes of old Delhi, avoiding large puddles, but it was nearly impossible not to have at least one of the three rickshaw wheels in a pool of water at any given time. Suddenly, the whole vehicle tilted to one side, threatening to collapse into a freshly formed pond. The back left wheel was stuck in a muddy ditch.

The petite rickshaw driver’s eyes squinted shut and his face tightened as he turned the circular accelerator handles furiously in hopes of thrusting the vehicle forward. His whole body tensed as he fervently oscillated the handles again and again. With a jolt, the rickshaw rolled out of the ditch. I watched his face relax. He caught my relief in the rearview mirror. Our eyes caught as I shivered inward towards the center of the seat to avoid getting drenched. He smiled at me in the mirror. I smiled back.

Abruptly, he pulled over!

This was Delhi, damn it! Stop smiling you stupid American! Shit! In a densely condensed city of eighteen million, not a soul was in sight. I clutched my handbag tighter. Warnings from generations who were more experienced corrupted my mind. No woman, especially one that looks more like a girl should be out here alone. The monsoon can drive a man mad, don’t you know?

On top of that, I smiled! Idiot!

The driver, also more a boy than a man, stepped out of the rickshaw into the downpour. I watched as he pulled off his flimsy, stained, button-down shirt. The raindrops splashed profusely on his bare shoulders and seeped through his sleeveless undershirt. Goosebumps popped up along his arms. I began to shake from the cold –or was it the fear?

He looked me straight in the eye and extended the shirt to me, yeh le lo madam, thand lag jayage. —Take this madam, you will catch a cold.  I politely refused the shirt, saying I was not cold at all while my chattering teeth betrayed me. I smiled and urged him to put it back on or he would catch a cold. He smiled back and insisted, le lo madam, saaf hai, koi baat nahi. — Take it madam, it’s clean, it’s no big deal. I refused again, more politely this time. He leaned over and gently placed the shirt on my lap. I looked up and smiled. He retreated, slipped back into his seat, body and undershirt completely soaked, and carried on, navigating the watery terrain.

Within minutes, I was safely at my destination. As I exited, I returned the shirt with an appreciative smile. He smiled back—and at that moment, the guilt drenched me more than any monsoon ever could.

That afternoon, in the warmth of his water-laden eyes, in the purity and kindness of his spoken words, and above all, in the sincerity of his selfless offering, every single thing I had been told about Delhi dissolved. It may well be a place of cunning and deceit, of creepy unsolicited advances, of gropers and sexual assault, of con artists and mob bosses. It is, in fact, without contention, a City of rape. But, it is, also without contention, a City that is much more than that. It is a City in which the maddening monsoon transforms an ordinary rickshaw driver into someone extraordinary. It is a City in which a stranger can detect the shiver in your eyes and give you the shirt off his back — literally! For me, this is and will always be Delhi. Among many things, some crueler than others, Delhi is a city in which not all men are created equal!

Grishma Shah is professor of International Management and the Director of Global Business Studies at a private college in New York. After a decade in academic publishing, research, teaching and traveling, she has learned that nothing educates, enlightens, informs or propels us forward like a good story. Her students rarely remember the numbers, graphs or data, but they do remember the colorful, rich stories she told them to bring the knowledge to life. Consequently, in an effort to make a deeper impact and pursue a lifelong passion, she has been moonlighting as a storyteller.