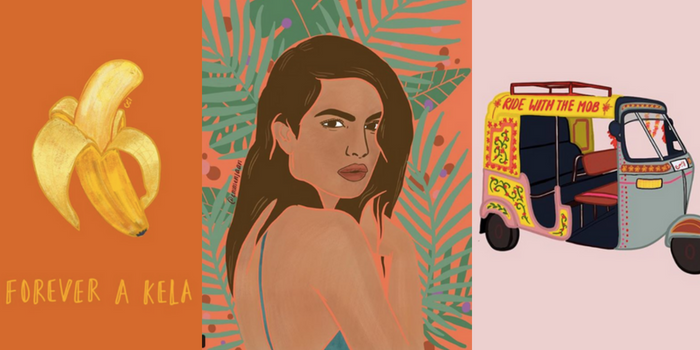 Emmen Ahmed, a Michigan State alum and graphic designer, is our next #OnTheRise artist. Her professional Instagram feed has attracted thousands of followers and her work has raised eyebrows in brown Hollywood.

Ahmed moved from state to state during her early childhood, she was born in Chicago near Devon Street, lived in New York, Denver and eventually settled in Michigan. While she grew up in primarily Albanian and Arab neighborhoods, she went to a predominately South Asian high school.

Theres 1 month left until graduation. Then it’s time to look forward to retirement.

“This was where I found the beginnings of my voice. I took opportunities in History and Art class to delve deeper into my own culture, into Pakistan’s history and its relationship to British, India, Bangladesh and other countries,” she said.

Ahmed went on to enroll at Michigan State University in Lansing, Michigan, where she studied medical anthropology. Passionate about her Pakistani identity, she was one of the founders of the Pakistani Student Association (PSA) at her school.

“My college is predominately white and Republican, but in the middle of all of that, you find people similar to you and you stick to them,” she continued. “I found a really good network of South Asians in college, and I took the opportunities in college classes to expand my knowledge of societal issues that we face.”

“Founding PSA was a great experience because I founded it with friends who I am really close with,” she added. “We wanted to make PSA about a community for all. One of our most involved members was a Cuban-American who was super involved and enthusiastic. It made us realize that PSA isn’t to seclude us, but rather to include us to the campus community.”

While she has only professionally explored graphic design in the past two years, Ahmed has created artwork her entire life.

“Art was my talent, but I saw it as my side talent – my hobby,” she explained. “I didn’t really think of it too much as a legitimate career path. I love what I’m studying, but I also love creating stuff. It’s all for fun – I didn’t start with the intention of getting big, gaining followers or becoming an Instagram influencer. I did it because I liked it. It’s really cool that people are moved by it and that motivates me, but I don’t think I see it as my long-term career.”

Ahmed’s artwork has sparked interest along with many commissions, some by prominent members of our community. Riz Ahmed, Kumail Nanjiani, and Hasan Minhaj have all either reposted her artwork or followed her account. While the large following she has amassed is humbling, Ahmed tries not to let it get to her.

Shah of Englistan || Shah of the Diaspora

“It’s flattering and the impact I can have is amazing. But these followers and engagements don’t define my worth; this is all for fun. Instagram has a way of manipulating you to think that likes equal your worth. At the end of the day, I’m doing this because I like creating art,” she said.