Entertainment In the News Issues TraditionMarch 25, 2022 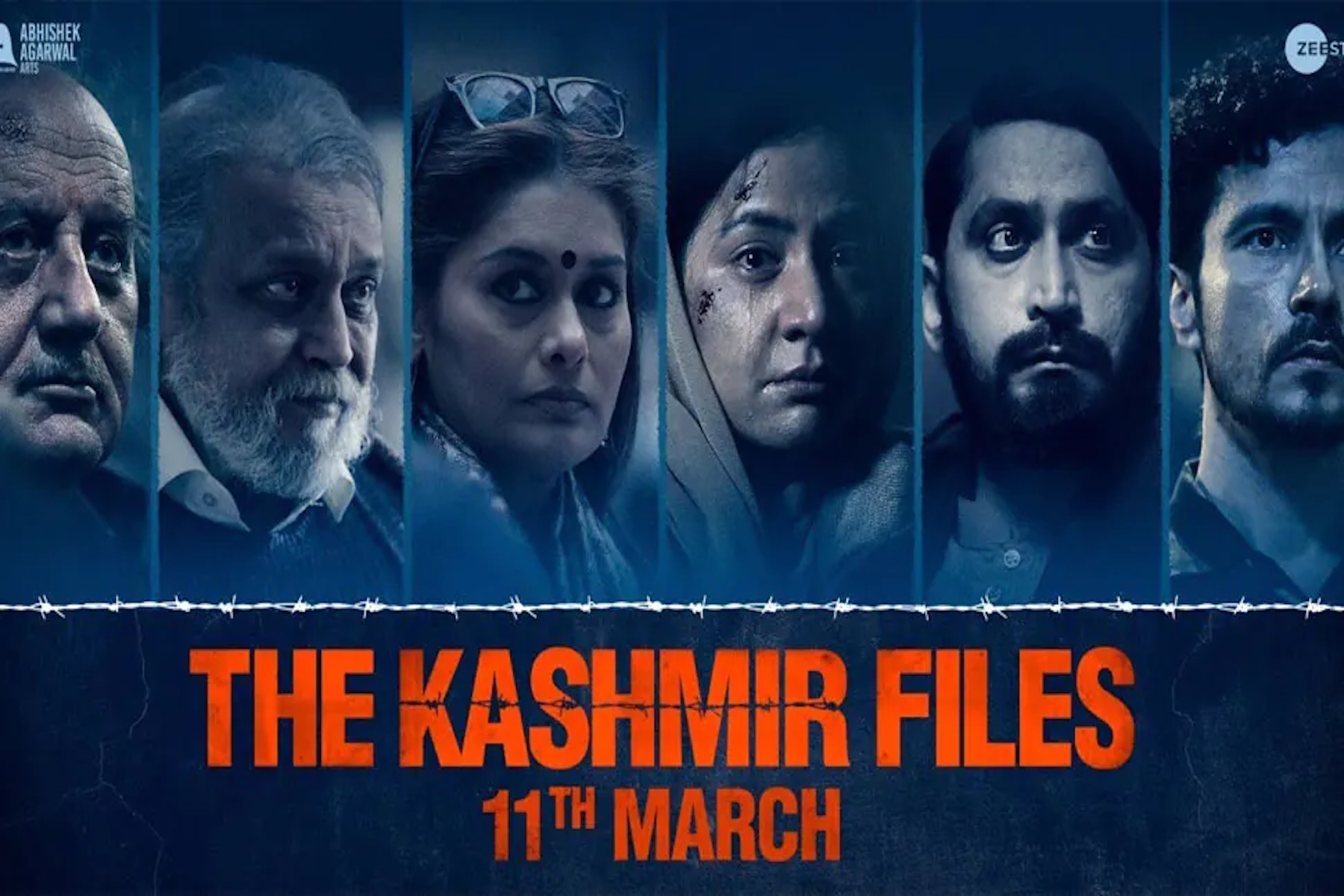 One election is enough to divide India into communal lines, but this time, a Bollywood movie has taken this hot space and is doing phenomenally well to widen the polarized discourse. “The Kashmir Files,” directed by Vivek Agnihotri, has attempted to showcase the horrors and crimes committed against Kashmiri Pandits from the Valley who were forced to leave their homes in the backdrop of an upsurge in militancy during the early 1990s.

The far-right bot squads are in full swing to persuade everyone that the film is closest to the truth and have urged the Film Federation of India to nominate it for the Academy Awards. Several BJP-ruled states such as Madhya Pradesh, Gujarat and Karnataka have waived taxes on the “The Kashmir Files” so that more people could join the BJP’s formidable propaganda machine to perpetuate lies through WhatsApp and other social media platforms.

When politicians give something for free it’s better to see it through the lens of apprehension. “The Kashmir Files” has all the ingredients that the BJP needed to push its narrative of hatred. In one scene, Anupam Kher tries to convince his grandson that “Azadi” is the song of terrorism and those students and academics demanding the liberation of Kashmir from the occupation of a “settler state” are part of a larger sinister network, a.k.a. the Tukde Tukde Gang (separatists) and urban naxals. The film also seems to push the Hindu victimization card that perfectly fits with the BJP’s crafted hysteria of “Hindu khatre mein hai” (“Hindus are in danger”).

[Read Related: Independence Day for Some, but not for all]

The creative liberty granted to artists for expanding the horizon of cinema has been efficiently used by Agnihotri to paint every Kashmiri Muslim as some kind of collaborator and put all the blame on their heads for the tragedy that befell Pandits.

This three-hour-long movie feels excessively dramatic and the makers didn’t even bother to back their hollow propaganda with some convincing arguments. Perhaps they concur that logic belongs to the bygone days and in the age of populism, selective and biased reading of past events can keep the ball rolling.

The tale of the exodus can only be explained by holding a grip on reality and for that, we need to explore those reasons that prompted some of the local inhabitants to burn the soul of “Kashmiriyat” into ashes.

Since Jammu and Kashmir acceded to India in 1947, the Indian National Congress deprived the region of a transparent democratic electoral process. The legislative elections of 1987 proved to be a breaking point with a voter turnout close to 75 percent. The Muslim United Front (MUF) was expected to claim a landslide victory, but Delhi didn’t approve the results and in its direction rigged ballots on a massive scale to help the National Conference retain power in Jammu and Kashmir. Pro-independence factions illustrated the election fraud as the betrayal of people’s trust and used this incident to fan the flames of separatism. Global events, including the First Intifada and the disintegration of the Soviet Union, proved to be a driving force and provided a fertile ground for the militant uprising in the Valley.

The ’90s were the period of India’s tryst with Hindu nationalists. Prime Minister Rajiv Gandhi was taking his deepest dives into the politics of opportunism. A few years later, the BJP-sponsored Rath Yatra, which was led by Lal Krishna Advani in support of the Ram temple in Ayodhya, led to 166 communal riots in which 564 people were killed.

During the same time, the Indian military in Kashmir was cold-bloodedly hammering the voices of dissent. A report published by Human Rights Watch in 1993 revealed that in three and half years after the electoral collusion in 1989, almost 12,000 people, most of them civilians, were mowed down. The indiscriminate use of lethal weapons, extrajudicial killings, enforced disappearances, rape and barbarity had reached saturation level. These were the reasons that resulted in the alienation of Kashmiris—Pandits who were perceived as sympathizers and ardent supporters of security forces and BJP’s Hindutva image became an easy target of militants and armed rebels.

“The Kashmir Files” can be seen as a reflection of modern India. Muslims, Dalits, tribals and free thinkers have replaced the helpless Pandits. The country is being okay when calls of ethnic cleansing against Muslims are echoed. It also brazenly celebrates the ban of certain cultural attire and cheers when legislation was passed to seize Muslims’ citizenship. The Modi government’s apartheid policies, the deafening silence of the Indian people and on some occasions, their bolstering expectations from the state to lower Muslims’ constitutional status to second-class citizens, may bring out the Frankenstein monster that, in the words of author Arundhati Roy, will consume India.

As far as Kashmiri Pandits are concerned, they have every right to present their version of the story but they didn’t need to hire an amoral sycophant who won’t shy away from using every nasty trick in the fascist playbook to create irreparable fault lines that will ultimately help the incumbent political party to dismantle democracy in the garb of portraying the true accounts of victims.

“The Kashmir Files” has tried to justify the unilateral actions of the government, one of them being the unconstitutional abrogation of Article 370 that really had nothing to do with the exodus of Pandits. A film that is stuffed with nefarious ulterior motives and propagates malice against people from particular sections cannot be made to stand in the line of worthy contenders that could represent India on prestigious international platforms.

A version of this article was originally published for Feminism in India.

Ajit Singh is an economics student and is currently pursuing a Bachelor's degree in education. His particular interest lies in the intersection of religion, caste, class, and politics. He spends his leisure time reading and contemplating quite a bit of Kierkegaard, Camus, Dostoyevsky, and other existentialists. The author's work has been published by MuslimGirl, Feminism in India, ThePrint, and National Hearld among other forums. He can be reached at ajitsinghmarch6@gmail.com.