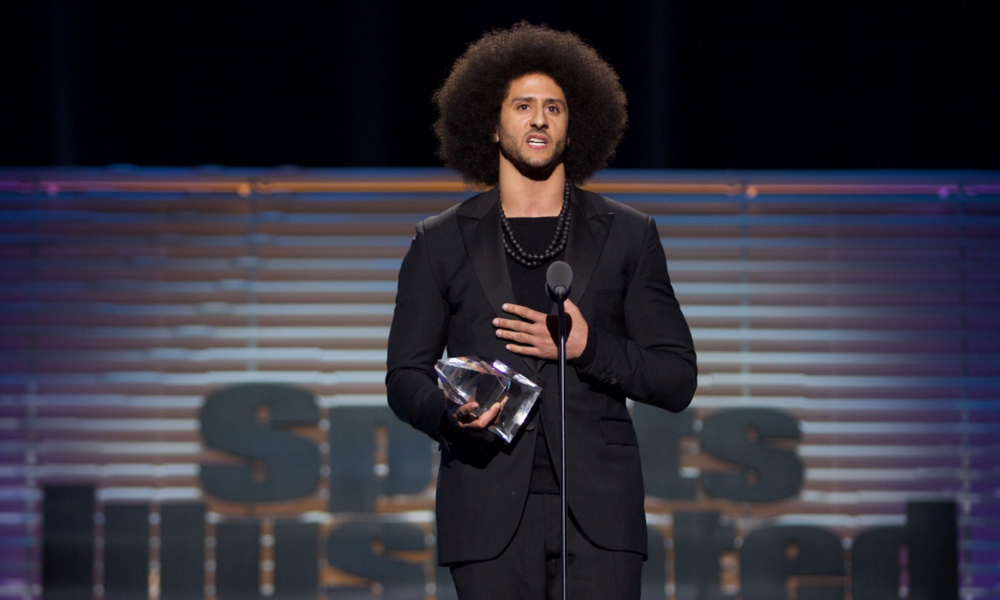 I will not share my usual greetings here because I know that you are quite likely enraged, although, with the surge of anger, this probably means that you are now sitting on both knees instead of one. Nonetheless, I am sure if one knee could cause a storm, both will likely transform into a typhoon. Oh, how threatening a sight that must be.

Lovely greetings aside, I am a Canadian woman watching the great American showdown from the sidelines, but I can tell you that keeping in touch with your nation is no picnic. It is slightly, just a tad wee-bit, horrifying. Seeing as the NFL has banned kneeling during the national anthem (NFL players can now so-called ‘peacefully protest’ in the locker room where it will not be seen and no longer remind those watching that they are part of a system that silently allows racial injustice to flourish), I thought of the only very Canadian, in fact, ‘Trudeaunian’ thing that I could do…I apologize.

I apologize on behalf of a system that has taken away the lives of individuals who would have played an integral role as fathers, sons, husbands, brothers, friends and valuable members of their community. I apologize on behalf of the police who somehow reach for their guns and shoot before they manage to speak. I apologize for the tears that so many mothers, sisters, wives and daughters have shed for the loss of loved ones.

I apologize on behalf of the so-called patriots who cannot see the urgency of your cause – the self-appointed patriots, the very individuals who declare that they would lay their lives on the line for their nation but yet cannot bear to see people like you speak up for lives lost in their nation. I apologize for the fact that the names of true patriots who sacrificed their lives in combat are being used to misrepresent a movement and silence racial discrimination.

I understand that the national anthem holds extensive significance for veterans and military personnel. I know that for Americans whose loved ones have died in combat, the anthem may represent their greatest sacrifice. I know that you and all the other NFL players who have taken a knee mean no disrespect to these individuals or the anthem itself; despite this fact, your actions have been misconstrued. I find it inconceivable that instead of focusing on the issue at hand – the deaths of unarmed black Americans who were unjustly shot and killed by law enforcement agents – this has become about re-instating white privilege.

However, I am Canadian, so perhaps I do not understand American frailties. A man standing upright seems to mean more than a wrongful death in your nation. In fact, I had a social studies teacher in high school who used to give a hypothetical example to exaggerate the difference between the patriotic sensitivities of Canadians and Americans. He said that if someone was burning an American flag in front of an American, that person better run for his or her life. However, if the same thing happened in front of a Canadian, they would ask, “Not working well, eh? Do you need a lighter?”

It’s not that we hate our nation, but we value ideals over objects and sensitivities. If you look at this example carefully, assisting an individual preceded protecting the object that represents these ideals, whereas a life means nothing in the context of the United States. I doubt that any Canadian would be eager to aid in the desecration of our nation’s flag, but this hypothetical example was only meant to demonstrate the discrepancy between both nations.

[Read Related: Standing Against White Supremacy as a Canadian PoC]

Focusing on the national anthem has similarly misguided, or you might even say hijacked, the authenticity and purpose of your cause. From way up here in the mountains, it certainly appears that as the criticism centered itself on you and the NFL players who have followed in your footsteps, the very fact that people in the U.S. are being killed for no valid reason is forgotten. My high school teacher’s hypothetical exaggeration has somehow become prophetic. What are a few lives lost when someone is ‘disrespecting’ the nation, right? I cannot help but shake my head in distress.

Regardless of the league’s current decision, most of us are hopeful that individuals like you will continue to push for justice. Although the NFL may consider it a compromise to ‘allow’ players to stay in the locker rooms during the national anthem, we all know that this does not truly give you the freedom to protest; instead, it is hiding the protestors, out of sight and out of mind. However, this attempt to contain the situation appears to be advancing the battle as the NFL Union has openly stated that they were never consulted. Furthermore, many team representatives have already indicated that they are not worried about paying fines on behalf of their players, and they keep our hopes alive as the struggle to obtain racial equality persists. Of course, these individuals were also inspired by your actions.

Many of us stand with the belief that the pertinence, necessity and honesty of your cause embody some of the highest ideals that are considered the epitome of true American patriotism. Heck, it even embodies Canadian forms of patriotism. If patriotism means protecting the people of your nation and loving your nation, then yes, you have shown more courage than most in your position. I will always consider you a great patriot who has loved his fellow Americans, so much so that he has placed his career, his lifestyle and his privilege on the line in every respect.

Today, your nation may not be able to look beyond the physical act of taking a knee to recognize how this act itself embodies American ideals, but history will forever remember you as a hero. As someone who specializes in history, I can surely say that public criticism and heroism run hand-in-hand. People only recognize a hero after an individual like you has lived, breathed, touted his or her cause many times and consistently lost various battles, so please do not despair.

God bless the United States, on the behalf of a fellow Canadian. Take care.