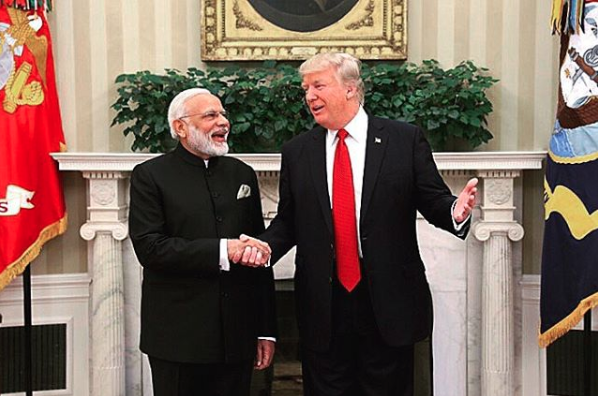 Across America, South Asian Americans (Pakistanis, Indians, Sri Lankans, Nepalis, etc.) vote overwhelmingly for Democrats. Although President Donald Trump has publicized his relationship with a small group of Republican Hindus, there appears to be no danger that Democrats are losing their favored status with South Asian voters. However, there is a real risk that the burgeoning alliance between Trump and authoritarian-right-wing Indian Prime Minister Modi will harm how South Asians are viewed by their neighbors. The Modi-Trump political rally in Houston this week may be an unfortunate turning point.

Trump will appear with Indian PM Narendra Modi at next Sunday’s “Howdy, Modi” event at NRG Stadium in Houston, which is expected to be attended by tens of thousands, the White House has announced.

By and large, Americans that aren’t South Asian don’t spend a lot of time thinking about South Asian Americans because the stereotypes are generally positive; educated, hardworking, and uncomplicated. Even when victims of hate, like the Wisconsin massacre of Sikhs at a Gurdwara on a Sunday morning in 2012 or the recent attack on a Hindu religious leader in New York, the narrative is generally of immigrant Americans that are just trying to do the right thing. This could be changing and it may get worse before it gets better.

On August 5, 2019, India made a rare appearance on American news channels when Indian Prime Minister Narinder Modi stripped Muslim-majority Kashmir of all autonomy, eliminated democratic institutions, cut off the internet, and essentially turned the state into a vassal of the central government in New Delhi. Since then, news coverage in the U.S. has been mostly negative and often referred to Modi’s status as a purveyor of bigotry and religious discrimination. The move was widely condemned in the United States, including by South Asian American leaders. In the subsequent six weeks, there have been regular news pieces describing human rights violations and suffering in Kashmir.

This week, Houston’s largest arena will be the site of a fifty thousand attendee political rally headlined by PM Modi and President Donald Trump. The sight of such a large and unique crowd is sure to be at the top of every national news broadcast, a political website, and insider podcast. Americans will see a rabid crowd of brown faces cheering two leaders, an American bigot and an Indian bigot, both with virulent anti-Muslim policies that push the limits of their respective national institutions. Although there are sure to be protestors from across the political and ethnic spectrum, the lasting image in the U.S. will be of two horrid leaders being hailed by South Asians.

Despite the potential damage of these images, there is cause for hope in the South Asian political community. The progressive movement across the country has a growing list of South Asians in leadership positions that are a counterweight to the Trump-Modi disaster. From Congressman Ro Khanna (Vice-Chair of the Bernie Sanders campaign) and Congresswoman Pramila Jayapal (sponsor of the Medicare For All Bill) to Varshini Prakash (Executive Director of the Sunrise Movement) and Joseph Geevarghese (Executive Director of Our Revolution), there is a deep bench that is changing minds and leading political conversations.

These two opposing forces within the South Asian American community, religious nationalism versus American progressivism, are rapidly drawing battle lines in the United States with ‘Hindutva’ as the dominating point of dispute. As I have discussed elsewhere, Hindutva is a fascist and supremacist movement similar to white supremacist movements in the U.S. It mobilizes around a virulent religious ethnonationalism, holding that India is a homeland for only Hindus and using violence to intimidate compliance around its economic and political policies. Indian Prime Minister Modi, his political party (BJP), and its cultural counterpart organizations (RSS, VHP, etc.) have won elections by pairing violent Hindutva political rhetoric with virtual impunity for those that engage in the rape, torture, murder and oppression of Indian Christians, Muslims, Sikhs, Buddhists, Ravidassias, and Hindu Dalits. (See the U.S. Commission on International Religious Freedom Reports for detail.) The sad truth is that there is a significant American contingent of South Asians that hypocritically support bigotry-fueled Hindutva for India while asserting liberal human rights protections in the U.S.

This dichotomy came to light this week with the hashtags #StopHinduFascism and #HowdyModi.

Right now Trucks across #houston are #blasting #Modi and letting folks know the freedom side will be protesting #Howdymodi #namoste outside the whole time!! #Stophindufascism pic.twitter.com/ECNX2GIY7e

Modi-supporting South Asian Americans pushed the latter hashtag as part of a campaign to publicize the Modi rally. However, it was quickly taken over by a coalition of social justice activists and organizations as they countered the whitewashed narrative with stories of persecution and oppression in India. Although this tension has been simmering for some time, it appeared to boil over with the recent announcement that Trump will join Modi on the main stage.

More telling, however, than the inclusion of Trump is the apparent abandonment of Modi by most South Asian American elected officials. When Modi was elected and in his subsequent visits to the U.S., his schedule was overflowing with large events, high-level meetings, and photo-ops alongside Senators and Congressional representatives of all political stripes and ethnicities. However, with Kashmir oppression in the news, South Asian American elected officials are widely refusing to be seen with Modi.

Representative Ami Bera had been a long time and effective supporter of the Modi-led Indian government, despite the latter’s deplorable human rights records. However, he is now one of the high profile South Asian Americans declining the invitation to the Modi-Trump rally. Representative Brad Sherman had publicly defended his decision to invite his colleagues to the event but even he reversed his position after hearing from constituents. The list of Democrat elected official attendees appears to be shrinking by the hour.

Although the South Asian American community continues to be solidly Democratic and the rejection of the Modi-Trump rally by elected officials is a good sign, the truth remains that the upcoming media narrative is likely to damage the reputation of the South Asian American community. It is never helpful for any community to fill a stadium in honor and appreciation of bigots, foreign or domestic.

Amar Shergill is an attorney, Executive Board Member of the California Democratic Party (CDP,) and Chair of the CDP Progressive Caucus. Twitter handle is @AmarShergillCA.