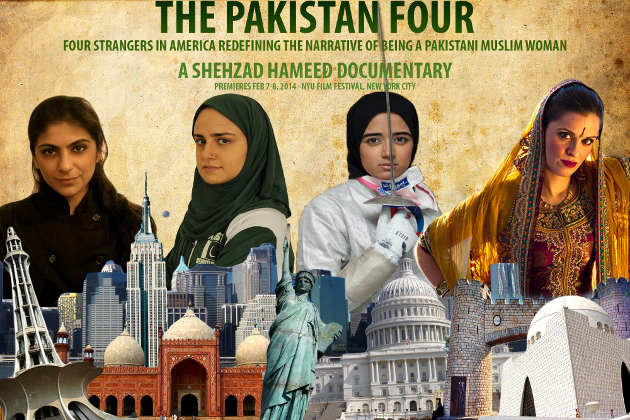 Pakistani women are breaking stereotypes and traditional boundaries around the world. “The Pakistan Four” conveys the stories of four women in particular, who set out to achieve their dreams across America from New York City to Portland.

Hareem Ahmad is Pakistan’s first saber fencer. The documentary follows her journey as she competes in the Fencing World Cup in Chicago. Nadia Manzoor is the first British Pakistani standup comic, who prepares for and performs her one-woman show called “Burq Off.” Fatima Ali is an aspiring chef who comes to New York City in hopes of becoming one of the best in the industry. The documentary takes us on her journey to compete on Food Network’s “Chopped” series. Kulsoom Abdullah is the first Pakistani female weightlifter. Facing legal clash with the International Weightlifting Association in regards to her hijab, she fights back and tries to win her case so she can compete again.

The documentary tells these four stories in parallel to each other. It is simple, yet powerful and inspiring. Running just a little bit over 30 minutes, the documentary effectively tells the complete journey of these four women without boring or confusing the audience. It leaves behind a great message for all young women who may feel bounded by their cultural traditions and expectations from their communities.

The director and producer of the film, Shehzad Hameed Ahmad, said the inspiration for the topic of this documentary actually came from Malala Yousafzai.

“I felt it was quintessential that we as Pakistanis needed more brave examples for women who faced many barriers in different shapes and forms. Today, as we stand, I feel there is a dearth of heroes, especially for women. An ordinary girl in Pakistan has no clue who to look up to and say, ‘I can do it too,’ Ahmad said. “There are many women working for change in Pakistan but the media at large ignores them.”

Ahmad said that he hopes that this documentary inspires both women and men to do whatever they dream with confidence. The documentary was premiered at the NYU Film Festival in February, and since then, it has been shown at various screenings at Harvard and Georgia Tech. Ahmad is organizing screenings across the globe, so make sure to like “The Pakistan Four” Facebook page to stay updated on any screenings near you!

If you’d like to hear more from Ahmad, read excerpts from his interview below:

What inspired you to make a documentary? Was it always a goal of yours?

I was always a mischievous, rebellious kid, looking for trouble as far as I can remember. I knew I had to do things, which I was stopped from. Being the youngest in the family, following my elders like a good, Pakistani-Muslim boy were paramount. Choosing to do my undergraduate in business administration didn’t work well either. I knew sitting in an office, wearing a suit and tie, and taking orders on things that didn’t have any meaning was not the life I was ready to accept. Hence, I decided to venture into TV journalism which gave wings to my rebellious instincts.

Back in 2005, private television was booming and I decided early on that telling stories was going to be my thing, in any way, shape, or form. I never freely expressed myself when I finally succeeded in getting my first job at 19 years old. The content usually revolved around political correctness and reporters were repeatedly informed of scratching the surface. This meant nothing to me, with no real change or impact for the world out there. Documentary film-making was my escape route to find and report about real issues, real people, and go in-depth and investigate people, issues and places on my own terms and be the boss of myself in order to create social impact.

From 2005 to 2014, I now feel I was destined to be a documentary film-maker with everyone conspiring to make me who I am today. There is no one in my family who has worked in the media before me, so in that sense, I’m kind of like the odd one out and that is what I always wanted – to stick out like a sore thumb rather than be part of the crowd.

How did you relate with the subjects and their struggles?

This documentary was in the end a very personal journey as well because gender barriers are not only restricted to Pakistani Muslim females but males as well. My family tried their best to force me into an engineering school and I just could not do it. I just wasn’t made to build bridges. In Pakistan, a successful Pakistani man can either be a doctor, engineer or very recently, a banker. Anything else is going to destroy the world :). So I could easily see myself in all four of them, which is why I kept going single-handedly, despite the plethora of problems I went through in its making. I think these four women are not only breaking gender barriers for women, but for men as well.

What impact do you hope for this documentary to make?

I think I’ve made a point as a Pakistani man that we need to support women rather than limit their roles in the four walls of their home. I hope men in Pakistan change their thinking towards women as well. Also, many gender stereotypes in Muslim countries are based on a very narrow interpretation of Islamic teaching. I feel that when we have examples like Hazrat Khadija, who was a fine businesswoman 1400 years ago, why are women barred from even driving in Saudi Arabia? So it’s definitely not Islam. I think it’s more cultural than anything else and Muslims as a whole need to evolve their culture with the times we live in. In Pakistan, 51% percent of the population is women and they are the majority. The country needs its women to go outside, take more responsibility and improve this country, side-by-side with the men. I hope this message is delivered to the audience.

Is there anything else you would like to add?

I want to win an Oscar one day and represent Pakistan in whatever way I can on the international stage through my stories. In the end, I hope to write a book on my experiences through the years and be able to live in every country in the world. You can learn so much from traveling.