Remember when your aunt from Pakistan would call every few months and ask if you’re married yet when you were like, 15? Yeah, Maria Qamar does too. She also reminds us how ridiculous desi culture can get when living in the Western world in eye-catching hilarious art she creates and posts on Instagram. Known as Hatecopy her drawings are a unique spin on Roy Lichtenstein’s work, known famously for his vibrant colored comic book style.

This young artist effortlessly depicts the reality of being a desi girl and spoke to us at Brown Girl Magazine about her struggle to find her identity, inspiration for her art and gives advice to young kids who want to pursue their dreams.

1. Tell us a little about yourself.

“I was born and raised in Pakistan until I was nine. Then my family moved to Canada in 2000, a year before 9/11. Things were a little rocky for me. I came from a place where I was so involved in desi culture. Then when I moved here I was like cool, I can be myself, and it’s a place that will accept me for being me. I heard that the teachers don’t beat you, the schools are nicer and people are friendly and what not.

Then 9/11 happened and it was like everyone hates me and I don’t know why. I’ve been in Canada for 15 years now and I basically went through all the ups and downs that a first generation Canadian goes through, which is moving here and realizing that you’re not wanted and then trying to assimilate as fast as you can. That sort of explains the style of work that I do which is American pop art mixed with Indian soap operas.”

2. What made you want to start this series?

“I think it was more of a subconscious thing. I don’t think it was one thing that made me start. It was kind of like I woke up. I was bored. I didn’t have a job. I was like I need to do something fun today. I was laid off when I started drawing and I was constantly looking for jobs on LinkedIn and after two weeks of that I was like fuck it, I want to do what I want to do, and I want to draw.

So I thought what artist is known for a specific style? The first person that popped into my mind was Roy Lichtenstein. So, I studied his work and tried to see if I can pick up any notes from that. I thought I’m going to try and draw one of his pieces, and what I drew looked different from what he drew, it looked like an aunty.

Which is hilarious, I was like I think I just drew an aunty?

So I put her in a scenario where she burnt a roti and posted that. Then I made another one, and another one and it kind of just grew on its own. Then one morning I woke up and I got an email from a BuzzFeed editor, which said, “Yeah we just wrote a story on you so let us know if we messed anything up.

And, it just kind of snowballed from there.” 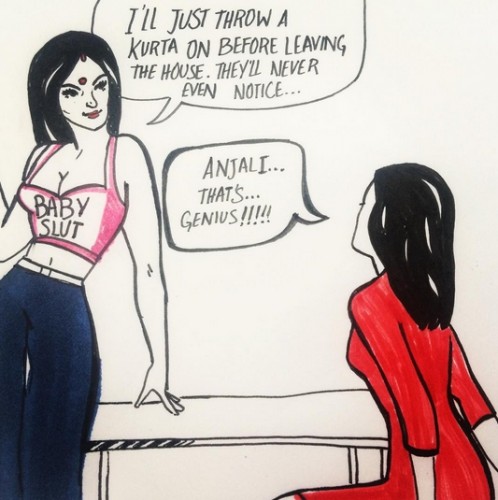 “I draw every day, but I don’t post every day. There’s such a heavy volume of work that a lot of it goes overlooked. If I post something new every day then the work that I originally posted might not get looked at. It’s good because it’s consistent. If I leave these works to marinate then it will get more attention. I’m just working on a lot of collaborations right now—on the low.”

4. Your work contains numerous messages regarding desi social stigmas, for example, your piece that depicts a couple embracing and exclaiming their exhilaration about never having a daughter. 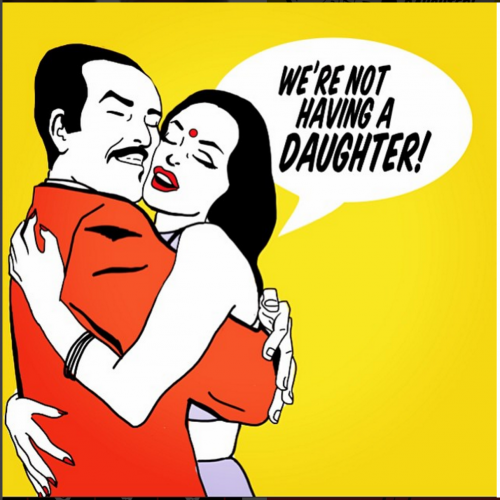 It’s funny because this reality is true in the desi community, unfortunately. Have you always been aware of the social stigmas and problems that plague desis, and is it something you consciously put into your art?

“For me, it’s not sad, it’s reality. I always witnessed this stuff. I didn’t have a lot of Indian friends but a lot of them were going through the same thing. The girls were so distanced from the fathers. There’s this notion that Indian men don’t want to have daughters because they’re just not comfortable with their own sexuality to handle a female.

It is a very patriarchal society. I do consciously put it in my work, but not to garner controversy. This is just the stuff I find funny. I always wanted to make these jokes, I just didn’t really have anyone to make these jokes with. My Instagram is sort of my way of making these jokes and sharing them with another person.” 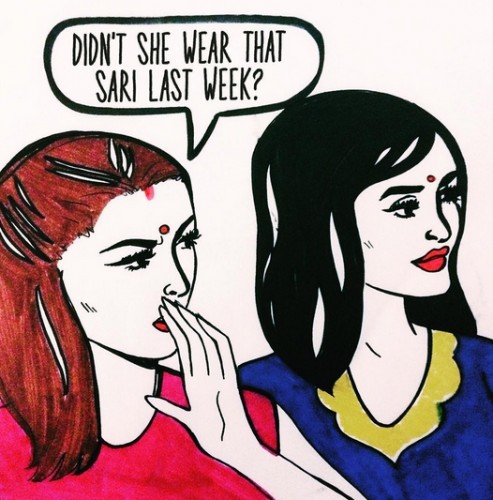 5. Do you find young girls reaching out to you because they relate to your work?

“Oh yeah, I get DM’s and messages all the time. They say ‘this stuff is so relatable and this happens to me and my friend all the time, how did you even know?’  I just say ‘I’ve gone through it too.’

I guess we’ve all gone through it, I’m just putting these feelings into a shareable medium.

Like when Anjali put a shirt over her crop top, girls are like, ‘I did that two weeks ago.’ It’s crazy.

My response is that you’re not alone. You think you are but you’re not.”

6. Do you have any advice for someone who is South Asian and wants to get into the arts but is facing difficulties?

“It’s always good to hear both sides. My parents are chemists and my brother is a doctor who married another doctor. The pressure was always on for me to be a doctor be a pharmacist, be something.

Right now, I work in advertising as a writer. Where I chose to end up is completely different. I’m embracing my artistic side. I would say to just stand your ground.

If I was a teenager doing this, I know it would be so much harder. I think it’s important to be persistent. If you want to pursue the arts and your parents don’t want you to, do it anyways. Art isn’t damaging anything. You have to defeat that notion for them that art is bad.

If you’re pursuing art and you’re Indian, then that is the best thing you can do for the culture. You’re embracing it in a society that completely shuts it out.  My advice is to just do it anyways. If you’re kid is talented then that should be something you should be proud of and you should nurture that.

They could be the next big thing.” 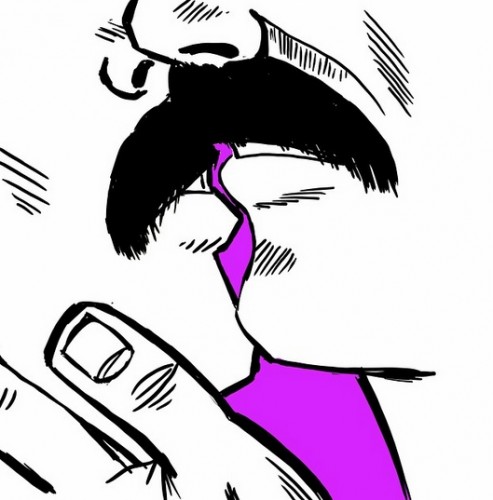 7. Are your parents more accepting now that you’ve garnered some success?

“My mom is very happy about it, because it’s Bollywood eccentric and she loves that. She also hears about my work from my cousins in Pakistan, so she’s happy about that.

My dad, on the other hand, you know, he’s a dad. So he thinks this is a phase. I don’t really talk to him about it that much but he’s more like, ‘When are you going to be a journalist? When are you going to a pharmacist?’ He’s thinking I will grow out of this [art] thing.”

8. What are your plans for the future?

“I know I’m going to do more exhibits in Toronto.  This next show will take place in October and will have a bunch of South Asian artists who are very talented, we’re going to invite everyone and have this massive party. Hopefully, that info will leak soon, but it’s in the works.”