Where my parents have to pause in search of words

That could free them from the indictment of strangers

Sometimes I wish there was a way to go back

And it would not matter that we were wearing shalwar kameez

While we sat on our own grass

And that my brother played basketball in his own yard

Our neighbor would not throw a steel shovel at our house

While we had a family barbeque

The windshield would not be shattered by a brick

The neighbors would not tell their children

And we would not get anonymous warning letters

The week we moved in

And my mom would not say

I think we should hang an American flag on our window

And the air is still cold

And they’d make fun of our accents

But at least we’d belong

To our countries back home

Every time I hear someone’s voice crack with vulnerability 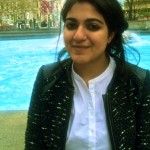 Mirzya Syed is a Barnard College alumna who Co-Founded The Muslim Protagonist Symposium at Columbia University in 2012. Since then she has worked for a child-welfare non-profit for NYC Civic Corps where she developed mentoring programs for youth in foster care and young mothers and is currently a graduate student at Drexel University in pursuit of her career in community health. She is passionate about literature, fighting inequalities, and her Pakistani-American-Shia hyphenated identity.