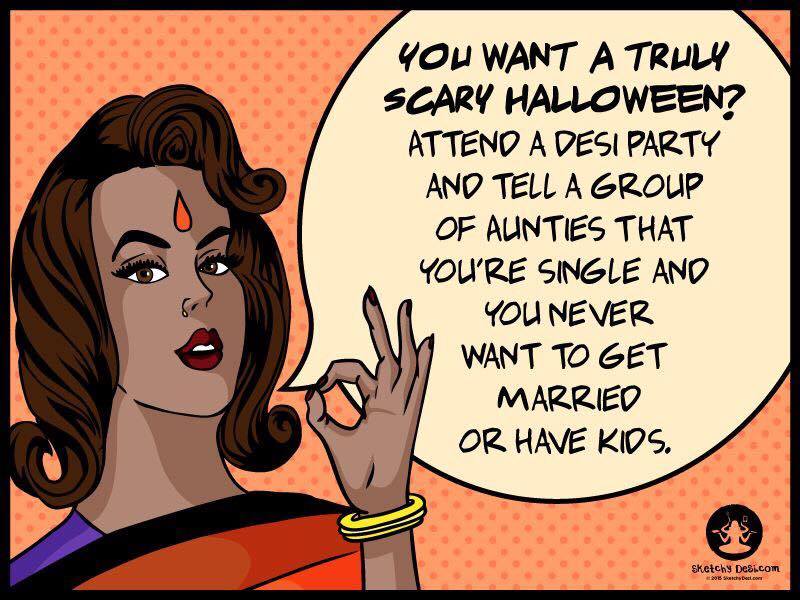 Gone are the days that witches, ghosts, and jinns scared us on Halloween. When you’re a single brown woman, it’s the aunties and their perpetual judgments on our marriage prospects that make us run in the opposite direction.

Below, the BG staff discusses some of their most horrifying personal stories of rishtas (or marriage proposals) they’ve gotten. Obviously, out of fear of bringing a black mark on the family name, all of them are left anonymous.

1. When technologically challenged aunties let the truth out

I was supposed to meet a dude and his family who were driving in from the neighboring state, and the night before we found out they had reports of domestic violence in their house, and the guy’s dad has two wives in two different countries. We decided not to meet them, obviously, but that day, his mom left my mom a voicemail but forgot to disconnect the call, so we heard the mom talk so much shit to some family member. Apparently, since my dad is a doctor, we have ego issues and I wasn’t that pretty anyway?! The whole ordeal freaked me out. I told my mom to put the whole rishta process on hold for a good year after that.

2. Because, as a girl, you aren’t allowed to have standards

My massi’s husband has been trying to set me up with his daughter-in-law’s brother on the premise that “he’s tall and has money—what else does she want?” The guy lives in India. I’m not here for this.

3. When your face isn’t nice enough

My cousin was meeting potential suitors and the guy’s mom had the audacity to tell the vicholan (rishta-maker) that my cousin was sweet and all “but her face isn’t that nice.” They were still “considering” her, though. The middle woman was so mad and clapped back with insults about the boy’s appearance. We cut that off real quick.

4. When you and you sisters are just options to the guy’s side

My parents got a rishta for my older sister and she rejected the guy, so they told the rishta lady that my sister said no BUT they did have a 22 year old…it made me cringe just the idea of being brought up like that. I’m a person not another model of an equipment that can be shown if the first one doesn’t work out.

5. When you’re so lucky to have a guy be attracted to you…

My mom forwarded me an email/bio data from a guy’s mom, and after listing all the guy’s accomplishments, the email literally ended with “looking for fair, pretty, slim girl.” That wasn’t enough of a reason to say “no” for my parents so I was forced to meet him. After the meeting and trying to text, it just wasn’t working out. When I told him I didn’t want to drag this out any further, he said I should give him a chance because he was attracted to me.

6. Because, why do you need an education when all you’re supposed to do is wait on your husband hand and foot?

This auntie I know has a nephew she wanted to set me up with. When she found out I had just started my masters she said, ‘oh, is she willing to NOT finish her program? She only started less than a year ago and he doesn’t want a girl who is educated past her BA.’ When my mom asked what he was looking for, she said, ‘a fair skinned girl who doesn’t wear hijab and likes cooking .’

One guy my parents found looked really familiar to me. Turns out, he rejected my friend earlier because she was planning on eventually going to med school, so when he came over, I made it clear that I wanted to pursue more schooling and thankfully, I never heard from him again.

7. Sometimes, they just don’t get the message

Freshman year of college, I told a long time family friend’s son that I wasn’t interested in him at all when he tried to make something happen. He dropped it and we didn’t talk at all afterwards. Three years later, he called my mom and told her that he wanted to be a part of our family and he knew I didn’t like him but my mom should convince me to marry him anyways. But WHY?!