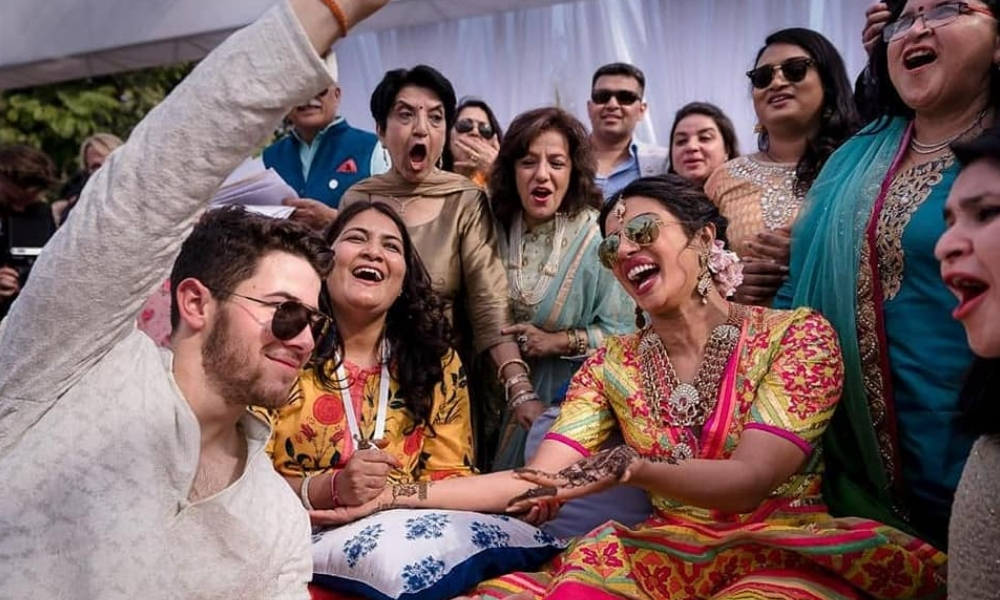 It’s the weekend all about Bollywood’s real-life jodis. As DeepVeer continues the wedding revelry with their A-list colleagues at a reception in Mumbai, Priyanka Chopra and Nick Jonas, India’s national jiju, are enjoying their first few hours of newlywed bliss. The couple tied the knot earlier today in a Christian ceremony at Umaid Bhawan Palace in Jodhpur.

Congratulations to @PriyankaChopra and @NickJonas on the occasion of their wedding. Ralph Lauren is honored to have dressed the couple as well as the members of their wedding party.

Lauren played a special part in the couple’s courtship, unknowingly, as he brought them together publically for the first time at the 2017 Met Gala.

[Read Related: Priyanka Chopra and Nick Jonas’ Roka Ceremony is Giving us ALL the Feels]

Before arriving in Jodhpur, Chopra’s mother hosted a puja at her home in Mumbai. As family and friends made their way to Jodhpur, the couple welcomed them to the palace with gifts, luggage tags and key cards personalized with their logo and information guides for the eventful weekend.

The official celebrations, literally bringing together the East and West, began with a traditional mehndi ceremony. Earlier today, the couple gave us a sneak peek into the mehndi on social media.

“One of the most special things that our relationship has given us is a merging of families who love and respect each other’s faiths and cultures,” Chopra and Jonas write in matching Instagram posts. “And so planning our wedding with an amalgamation of both was so so amazing.”

One of the most special things that our relationship has given us is a merging of families who love and respect each other's faiths and cultures. And so planning our wedding with an amalgamation of both was so so amazing. An important part of the pre wedding rituals for the girl in an Indian wedding is the Mehendi. Once again we made it our own and it was an afternoon that kicked off the celebrations in the way we both dreamed. @nickjonas

The pair looks happier than ever in these Abu Jani Sandeep Khosla designs, Chopra in a “folksy, multi-hued organdy ensemble” and Jonas in an aqua bakhiya kurta. The famous fashion team also designed Chopra’s jewelry.

Before today’s nuptials, the celebrations were kicked into high gear with a sangeet last night, culminating in fireworks. Priyanka Chopra and Nick Jonas will continue to pledge their love to each other in a Hindu ceremony tomorrow, which will also take place at the palace.

Vogue honored the couple on the publication’s first digital cover, and Chopra has her own cover story detailing the highlights of the couple’s relationship, including Jonas’ proposal in Crete.

Watch them play the newlywed game in this exclusive Vogue video:

Congratulations to happy couple! May your marriage be forever filled with the same blissful love you feel today.