Community Highlight In the News PoliticsOctober 2, 2014 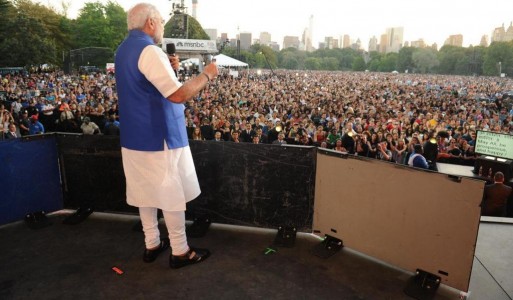 India is special because of the different religions and cultures mashed together that live together in perfect harmony. At one time, India was a country that showcased tolerance and respect for all religions. Indian Prime Minister Narendra Modi and the Rashtriya Swayamsevak Sangh group (RSS) have challenged this by showing they have no respect for minorities. According to claims from the past, they either want the minorities to leave Bharat or convert to Hinduism.

Personally, I have no tolerance for these idiotic fascist ideals. On Sept. 28, I went to protest against Modi’s presence in the United States at Madison Square Garden in New York City. Like many others, I believe Modi, who at the time was Gujarat’s Chief Minister, should still be held accountable for his actions during the 2002 Gujarat genocide against Muslims, or the events that took place in Kashmir, as well as his threats to evict Sikh farmers from Gujarat.

It was amazing to see the number of people picketing against Modi before his big speech at the Garden, in front of 18,000 Indian-Americans. Like many others, I too yelled, “Go away Modi!” while waving my picket sign that read, “MODI 21st CENTURY NEO-FASCIST.”

The whole event seemed like any normal protest, but I didn’t expect to meet the man whose story will always be engraved in my heart. Salman approached my friend and me and asked us why we were protesting. A little confused by the question, we stated we were here to support the victims and families who were destroyed during the 2002 Gujarat genocide.

He then proceeded to ask, “Did you lose someone in the massacre?” This question of course made me annoyed; I didn’t have to be related to a victim to care. That’s when he told us his story.

Salman’s entire family was eradicated by the mob during the 2002 Gujarat massacre. He told us how his mother, sister-in-law and a niece were raped and then killed, as well as his brother and father, who were tied to a post, drenched in gasoline. The mobsters then burned the Quran, and used those flames to burn the victims alive. Salman’s nephew was the only surviving victim, who witnessed the whole ordeal. He wasn’t left unscratched though, because they chopped off his legs, at the mere age of 12. Currently, the same little boy is living in a psychiatric facility in California.

I heard many stories during the protest from many people, but this one hit me the hardest.

During the Gujarat massacre, approximately 9,000 – 10,000 people created a mob and attempted to destroy the entirety of the Muslim community in Gujarat. They killed, raped, stole, and burned thousands of victims. An attack as large as this would have of course been known by officials, and according to reports, Modi was allegedly proven to be involved in the massacre. For more than a decade now, many Indians say Modi could have done more to slow down or stop the bloody riots.

It’s amazing how a man who has been accused of all these wrongs ended up as the Prime Minister of India. And let’s not forget the fact that he was not allowed to enter the U.S. many years ago, due to his alleged involvement in the massacre.

So the big question remains, why are we happily welcoming a fascist like a “rock star,” who hasn’t answered for his crimes?