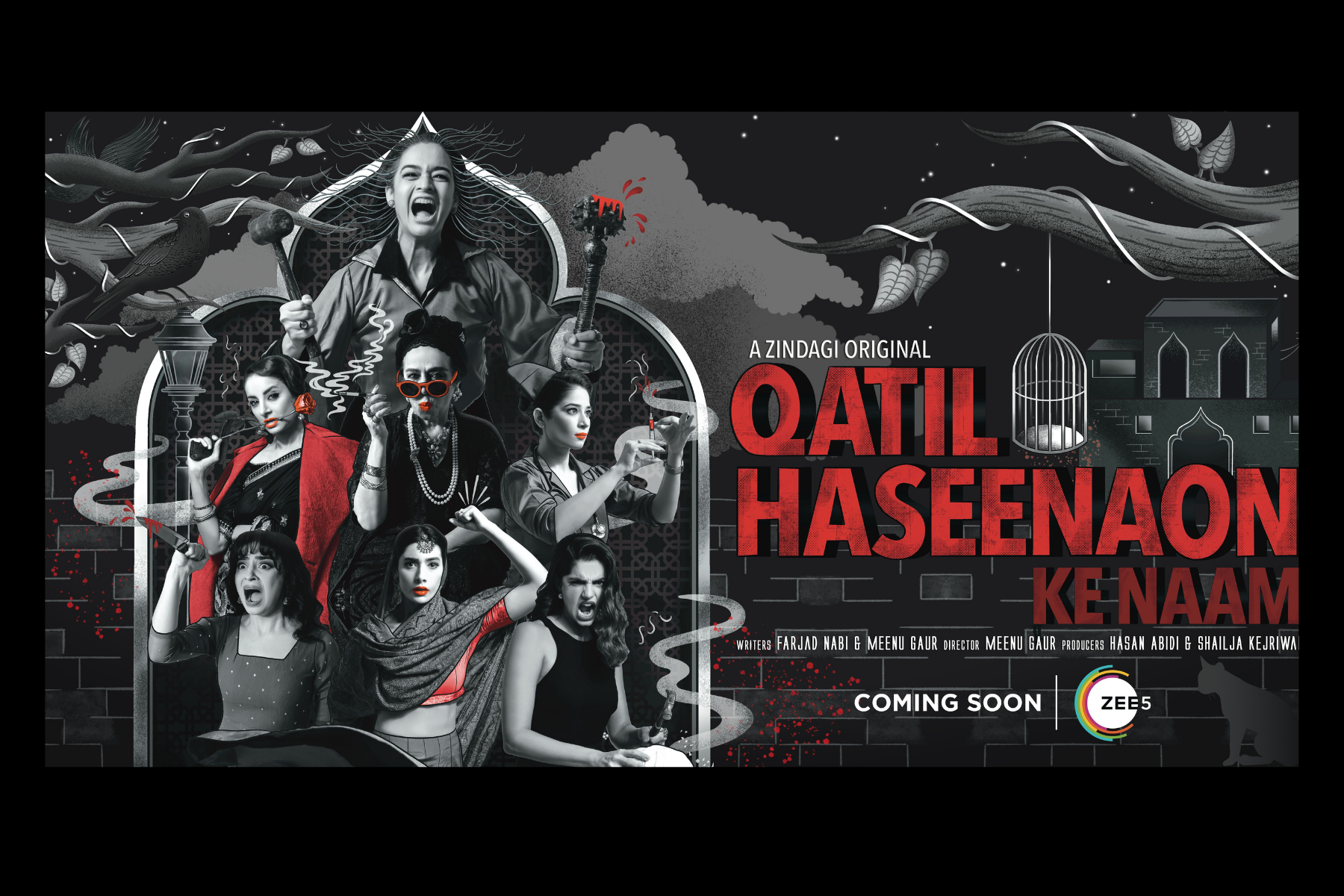 In many respects, ZEE5’s latest original web series “Qatil Haseenaon Ke Naamit” is a show we’ve seen before. The oppressed female character enacts revenge on her abusers in a violent fashion. The consequences are far-reaching, and narratives of several characters all end with aplomb — and plenty of blood. The opening scene literally shows (the brilliant) Samiya Mumtaz collecting parts of a chopped-up body.

In this respect, the show is treading on familiar ground. British Asian filmmaker Meenu Gaur’s turn at this desi feminist noir certainly has style, but is sometimes lacking in clear character arcs and clearly wears its influences on its sleeve as its narrative unfolds over 50+ minute episodes.

Noir is a hard genre to transpose into the modern era, given its age and relevance in Western cinema history. And while “Qatil Haseenaon Ke Naam’s” characterisations are undoubtedly noir in tone — with an air of Barbara Stanwyck in “Double Indemnity” — in the cinematography it feels that here an equivalence has been drawn between “noir” and “black,” with too many of the programme’s pivotal moments marred by inky, smoky, hard-to-watch composition. It’s almost as if Lahore’s lethal smog situation made its way onto our screens too.

Across its six episode runtime, the foundational elements of film noir are present for film nerds. Murder, a pessimistic worldview, an absence of morality and themes of entrapment are all present and directly call back to the genre heritage of Billy Wilder and Rudolph Maté. Thematically, “Qatil Haseenaon Ke Naam” should be lauded for its clear care and respect of moviemaking tropes from almost 80 years ago.

However, genre and cinematography aside, there is a deeper question to be answered here, and that is to do with how the programme’s female characters are written, and what it means that these tropes are being established for desi women leads.

For example, take Mehek, played by Sarwat Gilani, our first protagonist suffering at the hands of her abusive husband, Aftab, played by Osman Khalid Butt. Gulab (Ahsan Khan), an Urdu professor, is responsible for putting an end to Mehek’s misery. While Mehek does return to the happiness she rightfully deserves, her narrative never really unfolds. There is no explanation as to why she put up with such a toxic relationship for years? There was no inclination that Mehek and Aftab were ever in love and the only common elements between their relationship were (borderline) alcoholism and lost poetry.

My favourites, perhaps, were Zuvi played by Sanam Saeed and Massey Ma played by Pakistan’s veteran comedic Beo Raana Zafar. Sanam’s portrayal of Zuvi’s callous demeanour, wrapped in glamour and art was not only convincing, but only a role she could pull off. Similarly for Beo Khalah, the transformation from “Aik Jhooti Love Story’s” Nusrat Jehan to a terminally-ill woman in “Qatil” is flawless.

It was a no-brainer. When Meenu reached out, I was intrigued. My intrigue was further cemented after reading the script. I like to work on projects that aren’t the usual saas-bahu narrative. Here, I also credit my schooling at St. Joseph’s Convent in Karachi and its diverse atmosphere. It instilled values of equality, humanity and feminism — elements I try and find in my scripts.

While we agree with all of the above, I challenge that we need another programme that shows women rising to the occasion with the progressive and opinionated middle-ground of working for better and more equitable gender treatment, rather than violent reprisals. She goes on to say,

“Aik Jhooti Love Story” was a show that centred around average women who were strong and opinionated — so was “Cake”! I think the narrative is slowly but surely changing. It will take time, but we will gradually see similar stories being aired on mainstream television.

It is also worth mentioning that, overall, the acting skills of other talent cannot be faulted. Immaculate performances by Ahsan Khan, Osman Khalid Butt, Mehar Bano and Samiya Mumtaz rise above storytelling that at times suffers under the weight of its own ambition (arguably another film noir trope in itself). Well-narrated Urdu poetry and character interactions, however, cannot save a plot that is at times grindingly slow and stretched.

The anthology clearly has also taken some amount of influence from 2020’s “Churails.” Both shows share the same cinematographer in Mo Azmi, as well as key cast members such as Sarwat Gilani, Mehar Bano and Eman Suleman, editor Kamran Shahnawaz, and last but not least score composer Saad Hayat. Naturally, there is a strong overlap of themes, production values, aesthetics and performance styles. This extends to character writing that may not be fully developed.

I suspect that these depictions of women as subservient (before taking charge), and voiceless automata breaking free from their situations is an intentional call-back and subversion of noir femme fatale tropes. And on its own merits, “Qatil Haseenaon Ke Naam” does make these characterisations with craft and care. But they are challenging in the context of South Asian culture, where the characters lack a deft moment of liberation like the femme fatales of the 1940s and 1950s Hollywood, but still ultimately feel shackled by a society that isn’t going to be changed by their actions.

But the emerging tropes that the show deploys — and what they say about powerful female desi women — is worth keeping an eye on, particularly from ZEE5, as two cornerstone end-of-year shows in a row end up more similar (despite production vehemently disagreeing) than you might first anticipate.