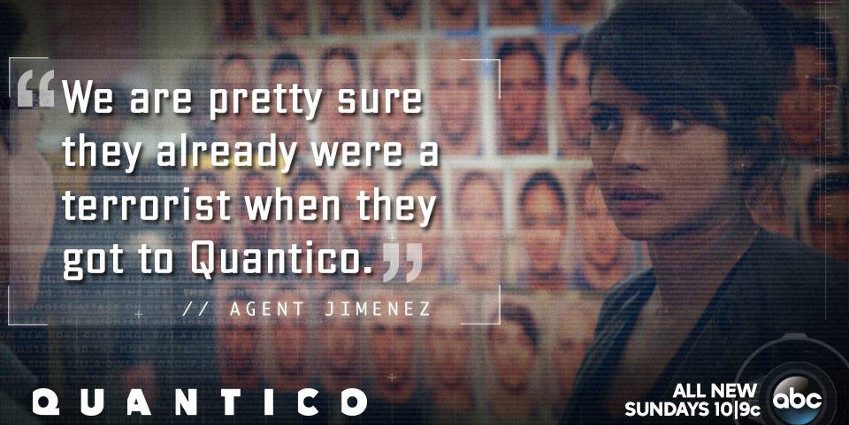 “Quantico,” the latest American thriller series, aired on ABC this past Sunday, Sept. 27, 2015. It is a classic whodunnit featuring one of Bollywood’s biggest actresses, Priyanka Chopra, who plays the role of FBI agent Alex Parrish. In the series, Alex is accused of committing a terrorist attack, which begins a retrospective evaluation of the remaining recruits at the Quantico FBI Academy.

As expected, the South Asian community rejoiced via Interweb as the pilot aired, hailing Queen Chopra for crossover into Hollywood—a seemingly impenetrable industry for People of Color. This perceived success, however, is disjoined from the realities of the effects of “Quantico” (and shows like it) on Arab and South Asian communities post-9/11.

For the better part of the past decade, American popular television has been obsessed with national security dramas—a genre committed to depicting Muslims as suspicious and dangerous characters with values in direct conflict with American ideals. This sensationalized brand of fear mongering has contributed to the cancerous Islamophobia that has permeated the American perception, and, consequently, its politics. “Quantico” makes no effort to break from this tradition, as it continues to focus on terrorism and Islam, thus supplying its pro-rata apportionment of fuel for anti-Muslim sentiment.

The pilot episode initiates its fixation on 9/11 with Johanna Brady (Shelby Wyatt’s) character, as she confesses that the reason she sought to become an FBI agent was because both of her parents died on 9/11, and, since then, she carries a piece of the plane that they died in. This scene essentially marks the beginning of the “Quantico” agenda for justification of destructive national security policies via creative indoctrination, utilizing vengeance and emotion as key factors in its execution.

This point is further bolstered by the show’s Muslim hijabi character, Nimah Amin (Yasmine Al Masri). She is portrayed at the end of the episode as a suspicious trainee, who is possibly responsible for the massive terrorist attack the show is centered around. It is not unlikely that the series will end with a reveal that a white character committed the attack, all for the sake of feigning nuance and singularity.

For this pilot episode, however, the writers found it effective to cast a shadow of doubt on the show’s only Muslim character. Why?

Because they are aware that this ploy may bring viewers back to watch the following week’s episode. Muslim fear sells and “Quantico” is just another vendor of this commodity. This is why films like “Argo” win the Academy Award for Best Picture and shows like “Homeland” win the Golden Globe for Best Television Series.

Ultimately, wanting to support and promote a fellow South Asian or Person of Color is not a defective or even misguided desire. In fact, it’s a textbook anthropological phenomenon to want to uplift our own, when they have managed to break into and thrive within a framework we have historically been barred from pursuing due to a lack of opportunities.

However, wanting our cultural kin to succeed and wanting to hold Hollywood accountable for their perpetuation of hatred and Islamophobic sentiments do not have to be mutually exclusive inclinations. We can surely beam with justified pride as we watch Chopra take the American small screen, which we similarly did when Aishwarya Rai starred in “Pink Panther 2” (2009) and Amitabh Bachchan made an appearance in “The Great Gatsby” (2013). But, this pride does not have to prevent us from acknowledging that Hollywood has historically cast Arabs and South Asians as either suspicious terrorists or comedic reliefs with “funny” accents.

And, if we continuously fail to acknowledge this for the sake of promoting talent and success in our respective communities, we only end up causing more harm with respect to our inclusivity in the larger American fabric. It sustains the position that Arabs and South Asians are only relevant within narrow roles.

Art and theater mirror our realities and play a large role when it comes to informing the public about world views. They aren’t simply affectations that exist within a vacuum, void of context and real world consequences. Sadly, the arts offered to our public through shows like “Quantico” result in Arabs and South Asians constantly being rejected from their communities because of misguided fear.

These fears directly correlate to why Indian men like 57-year-old Sureshbhai Patel have been forcefully tackled by police officers to the point of becoming paralyzed, all because he appeared to be “suspicious.” They correlate to why Sikh men like 53-year-old Inderjit Mukker have been brutally beaten within inches of their lives after being mistaken for Muslims and/or Arabs. They correlate to why our Muslim children, like 14-year-old Ahmed Mohamed, have been greeted with handcuffs rather than praise when attempting to showcase their technical and engineering abilities at school. They correlate to why thousands upon thousands of Arabs and South Asians throughout the world have been subject to some of the most violent and indiscriminate national security policies, all perpetrated in the name of our country and further exasperated through exhibitions like “Quantico.”

In praising Chopra, we need to recognize the grave harms she contributes to—even if her opportunities are scarce. In endorsing the ventures of our cultural kin, we must be cognizant of the larger effects that these ventures implicate for our communities at large.