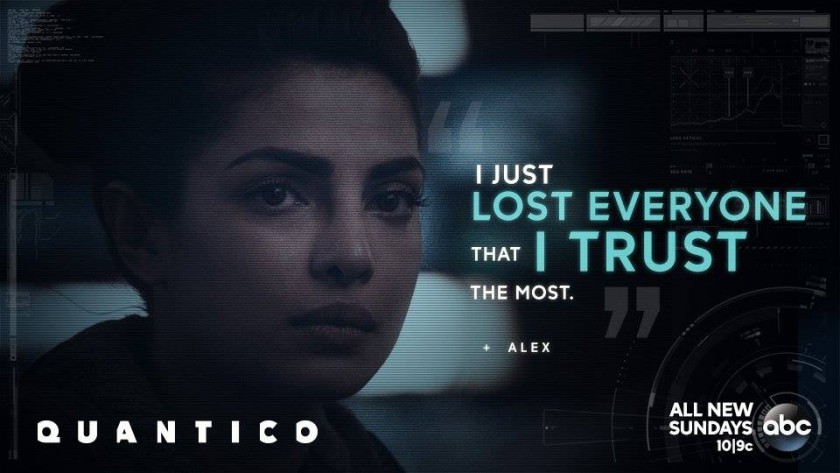 WOW! Tonight is “Quantico’s” winter finale, but I need to brace myself before tuning in at 10 p.m. because last Sunday’s episode (10) was full of action and if you need to catch up on the drama, read our review of episode nine before jumping to 10!

Nimah is heading the “let’s make sure Simon knows he’s not worthy to be in our presence” party, dragging Raina along for the ride. While I like the characterization of the twins, Nimah is now coming off as a bit arrogant. I understand how dangerous it is that a killer could be released because of false evidence against them, but maybe the FBI agent in charge shouldn’t have falsified evidence in the first place.

Simon stands by his decision, and I really feel for him. He keeps trying to do the right thing, and everyone seems to despise him for picking what’s right over what will keep him best friends with the rest of the team. Raina seemingly does not want to condemn Simon, but her desire not to go against her sister outweighs these feelings.

Later, we find that Simon, who was in the Israeli army as a translator, was also tasked to get close to the wives and female companions of the army’s targets and discover things they could exploit. Simon thought his platoon leader was just going to ask questions as he normally did, but it is implied that said leader went rogue and sexually assaulted the women for information.

Simon is filled with guilt as he knows he was responsible for the pain those innocent women went through, and everyone is horrified by the revelation. But after Raina discovers Nimah exposed Simon’s secret, she tells her sister off and Ryan addresses the group in support of Simon. He reveals his special agent status and explains that as a former soldier, he understands what Simon was going through — dealing with pain, guilt and trauma. When Simon pushed him against the wall in week three, Ryan could see that Simon was dealing with the same feelings. Unfortunately, because Simon did not report this violent incident to Miranda — which is against the rules — Simon is kicked out of Quantico.

Meanwhile, Caleb tries to prove his father wrong about Shelby’s half sister, which turns out to be a bad move, as Shelby is furious when she finds out. Shelby does return, however, and tells Caleb that he made her doubt her sister’s motives. She orders him to dispel that doubt, which he does in a heartbreaking scene. Caleb has a Skype conversation with Shelby’s sister and reveals that he knows she is scamming Shelby out of a lot of money. Caleb explains that for his silence, he wants a 10 percent cut. Shelby is horrified to hear her “sister” negotiate for 5 percent and realizes that she was being conned all along.

So, what about Vasquez? We already know the scar she wears is fake, but what we don’t know is why she wears it. Until now.

It turns out Vasquez has a restraining order against an emotionally abusive ex-partner. When she got pregnant, she finally left him and fought for full custody. But because emotional abuse is hard to prove and Vasquez clearly feared for her child’s safety, she added the fake scar on her neck to prove visible signs of abuse to the judge. But when she decided to go to Quantico, it was around the same time her ex-partner finally turned his life around and sued sue for full custody and won. Vasquez now wears the scar to remind herself of the person she was before she left her ex, and how he had turned her into a shell of her former self.

Oh yeah, Alex and Ryan continue to go back and forth, ending with them admitting their feelings for each other. And Miranda’s back, but Charlie isn’t mentioned once. Don’t ask me why, he just isn’t. I assume he evaporated.

I guess all of that is interesting, too.

In spite of Priyanka Chopra’s performance, which is much better than the earlier episodes, her plot at Quantico isn’t that interesting. Even the arc involving her father is a bit of a letdown.

The rest of the team who were originally left in the dark about Alex faking her confession is let in on the secret. As they attempt to discover where the second bomb could be — by combing through all the evidence they have now that the suspect pool is confirmed to be a fellow Quantico classmate — they also have a deadline and location: In 24 hours, the Democratic Nomination Convention will take place in New York City.

Miranda and Liam tell Alex they need to watch Alex’s friends too — Raina, Nimah, Simon, Vasquez, Ryan, Caleb and Shelby are all put under surveillance. While Alex does not want to watch her friends who have put so much on the line to prove her innocence, Miranda points out that one of them could still be the bomber biding their time. Alex sees the logic and agrees to be the watch.

Raina goes to the hospital to see the head of the extremist cell she and Nimah had infiltrated. It’s pretty clear Raina has feelings for him, And Nimah is none too pleased. Raina tells Nimah the leader is fighting for freedom in the only way he knows how, but Nimah tells her that she has to be careful, as Nimah realizes over the course of the episode that the sisters are being watched by their own.

Caleb is still understandably angry with Shelby, and now that they are no longer tasked with proving Alex’s innocence to the FBI, Caleb has gone back to his old ways of shooting Shelby snide remarks. Caleb reveals he told his mother about Shelby and Clayton’s affair because he wanted to protect her.

Finally, there’s Simon. At first, he is seen going to meet his bomb-expert friend, but they don’t exchange any important information, as both are aware they’re being followed. After Simon returns, he reveals a shocker: He was responsible for Grand Central. How? He designed the bomb set-up at Quantico, and someone obviously stole it.

He proves it by explaining that his plans were intentionally flawed and that Grand Central wasn’t a target — he had planned to target a mosque and a synagogue and that the bomb squads would find both before they went off. He wanted to create a dialogue between Muslims and Jews so that they could stop being at war with each other because peace is the only solution. But if his design was changed, then someone at Quantico must have stolen it.

Simon then turns the tables on Alex. If the team finds the bomber, yes, they save countless lives, and Alex’s name is plastered all over the newspapers as a hero. But what happens to the rest of them? Will their careers be safe? Alex negotiated for their immunity once they find the bomber, so they’re safe from prosecution, but how will they ever move up the ranks of the FBI? While they agree Alex is not a terrorist, they don’t feel like they can trust her anymore. They all leave and Alex is heartbroken. Miranda and Liam tell Alex she did the right thing, but she still feels guilty.

At the end of the episode, we are no closer to finding the identity of the bomber. Alex goes to find Simon, who seems to be heading into his house. She pleads with Simon to keep helping her as she was one of the only people who stood by him when he was kicked out of Quantico and told him that she did not see him as invisible, only as her friend. She wants things to go back to the way they used to be, but he’s not so naïve. After everything they’ve been through, they can’t go back to the way things were at Quantico. He brushes her off and she leaves, upset. As he takes out his keys, someone in a black turtleneck and toque jumps him from behind and puts a rag over his nose and mouth as he struggles to get free.

I’m loving the amount of action and supporting character exploration. However, there are a few things that deserve criticism. First, Nimah’s characterization. She seems very high-and-mighty in this episode, not just towards Simon at Quantico, but also towards Raina in the future. She is very logical and is willing to risk it all for the good of the mission, but she also seems to think everyone around her should be exactly the same. They should be just as self-sacrificing, up front with the truth and have hands just as clean. Simon, who has not been truthful because of his trauma, is not someone worthy of being a NAT in her eyes, which seems too harsh.

Secondly, was it really necessary to make Shelby’s half-sister some random con artist in Saudi Arabia? Let’s hope that plot line will get fleshed out further.

Thirdly, it seems insane for Raina to get emotionally involved with the leader of the extremist cell. He might be misunderstood, but according to Nimah, he seems to share the ideologies of people who would support the Grand Central Station bombing. And that’s not someone with whom you want to be involved. This plot line makes Raina seem foolish and too idealistic, especially considering Nimah’s polar opposite cynical and suspicious nature.

And finally, I agree with Miranda that it is possible one of Alex’s friends could still be the bomber. But if I were in Alex’s shoes, I would have told Miranda and Liam to take a flying leap and do their dirty work on their own, even if that means spying on Alex, too.

It’s like the episode went out of its way to demonize its female characters, except Vasquez, whose behavior with regards to the scar, while dishonest, was to keep her daughter safe from a man who was emotionally abusive. Vasquez seems to be the only one who had the right reasons for doing what she was doing. Even Miranda seems less honest after telling Alex to spy on her friends.

The episode was excellent; don’t get me wrong, and I can’t wait for tonight’s season finale. I just wish they didn’t throw the female characters under the bus to further the plot.