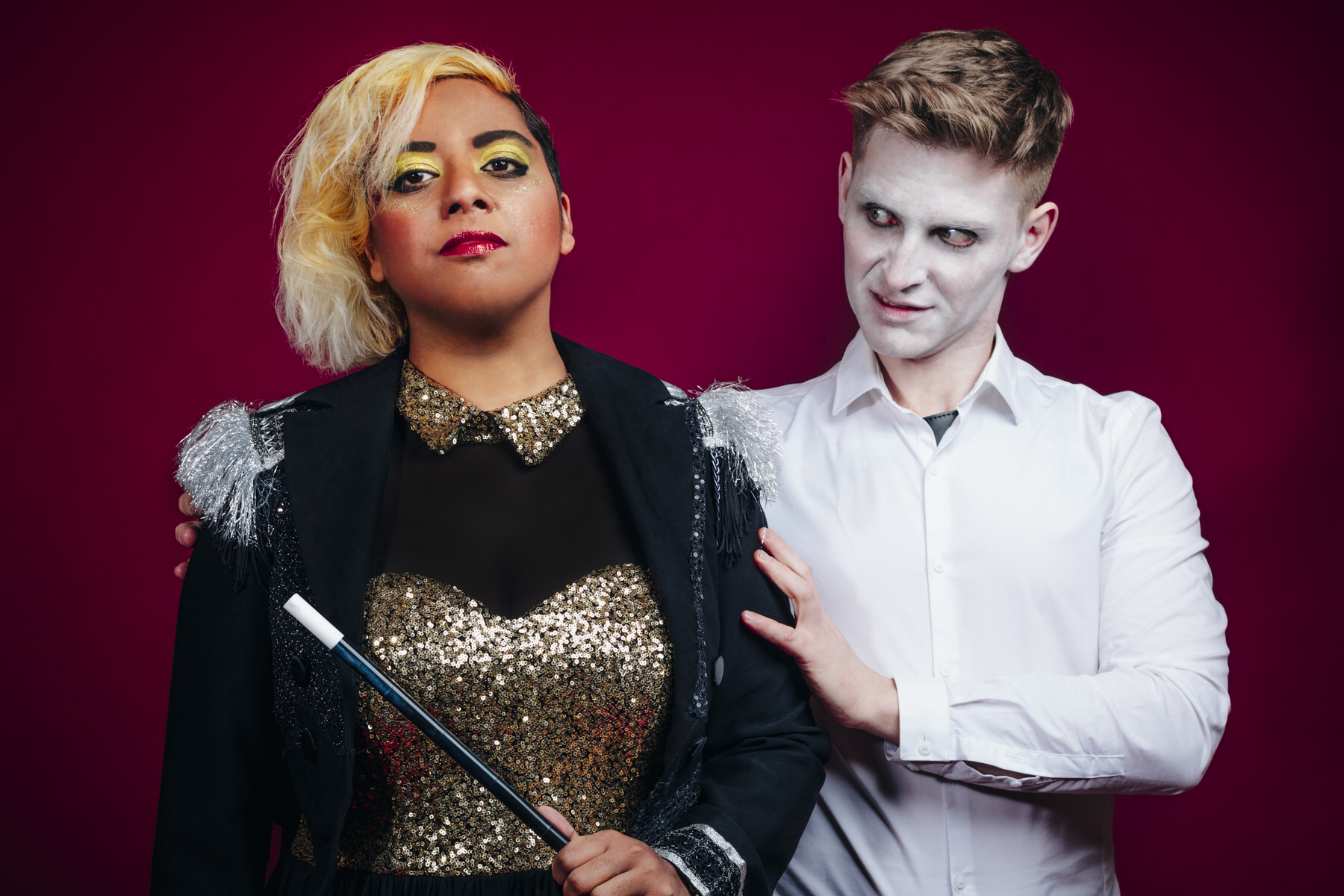 Let’s think: How many magicians of South Asian origin can you name off the top of your head? Now ones that are also women? And queer? Probably not many, if any at all. Creatrix Tiara is out to change that with her new show “Queer Lady Magician.” Based in Melbourne, Australia, the show is for Melbourne Fringe and co-produced with the Women’s Circus as a part of their Still I Rise Fringe mentorship program.

In “Queer Lady Magician,” Tiara combines her passion for storytelling and magic to create a performance that conveys the highs and hardships of being a brown girl in the creative field, and what that has meant for her. Tiara poignantly portrays her unique story in “Queer Lady Magician,” and Brown Girl had the chance to ask her more about her creative process, childhood, and unending feeling of imposter syndrome.

1. What began your passion for magic? Who were your inspirations?

“Magic was my first childhood passion. My sister got me a magic kit from Hamleys, my parents got me magic books, my dad and I would watch magic on TV a lot. We traveled a lot and I always insisted on visiting the local magic shop. One of my first big shows was seeing David Copperfield live in Singapore – back then he was The Magician TM, I don’t think I knew of anyone else! I don’t remember why I got into magic per se – likely it was because I found it really amazing and mind-blowing and super fun. The ability to pull off something that seemed impossible really appealed to me.”

2. “Queer Lady Magician” is incredibly interdisciplinary! How did you blend these varying passions seamlessly to produce this show?

“I’ve always been interdisciplinary in my approach to my creative work or even my life. My life philosophy is to sign up for anything that looks interesting – I just want to experience what the world has to offer! I’ve been writing my entire life, started performing seriously circa 2009, and started getting into games a couple of years ago because I saw how powerful interactivity can be in engaging people with a particular topic or idea. Queer Lady Magician was a great vehicle to bring all of those together – there are interactive elements because magic is a very participatory art; there’s storytelling; there’s obviously the magic performance, but it’s backed up by specially written patter that helps reframe classic magic tricks in a new light. So the interdisciplinary nature of it came naturally to me. And of course, there’s the social justice element, because that’s a part of everything I do: representing my truths and experiences and getting people to understand marginalized perspectives.

It’s been interesting to explore the text in particular because I feel like that gets underexplored in magic. There are some very strong magic shows that use story and text in a really compelling way, but there have also been many magic shows I’ve seen where the tricks are technically flawless but the patter turns me off. For example, I saw someone do this card trick where the story was about the Spanish royal family who crashlanded into a land of African cannibals (black cards, obv) who go “ooga ooga ooga”…yeesh. I didn’t care that he was very good, I just got turned off. Meanwhile, I saw the debut show of Vincent Kuo, a 19-year-old from Sydney with a very unassuming personality whose tricks may not be the most polished, but it was original and beautiful and it made me cry. It really reminded me that the stories are at the heart of my show – the magic is the medium, yes, but it’s in service to a greater story rather than just “Tada I Can Do Magic Now!”

“I did get a lot of help though. Anthony de Masi, a professional magician, consulted on the show and taught us a lot. We got dramaturgical support from Zeb Direen, who creates work around being non-binary and queer, as well as Penelope Barthau, creative director of Women’s Circus (the organisation supporting us) and an accomplished theatre artist in her own right. Sharmini Kumar, our director (who makes modern-day feminist adaptations of Shakespeare and Austen) has also provided coaching and script support from Day One. And that’s just a fraction of everyone that’s contributed to this project one way or another! Everyone’s helped me bring those passions together in the best way possible while adding their own passions to the mix.”

3. You mention how rare it is to see women magicians, much less WOC or queer women. How have you seen that change in your time doing this work? How do you hope your show will influence that?

“I only really started working on this around January so I don’t know if much has changed in the last eight months! There is a new podcast about women in magic (Shezam) which is pretty good, though maybe a little White Feminist in parts, but hey it’s a good start and there have only been a few episodes! It’s also great to see magicians like the incredible Indonesian horror-themed magician The Sacred Riana gain international attention.”

“What I am very excited about is the prospect of seeing magic be incorporated into queer indie political performance art in general, spreading outside the magic scene. There’s so much potential for magic as a way to examine and deconstruct traditional ideas, present a new way of thinking, inspire others to imagine something different. I’d love to see what happens when non-magicians learn magic techniques and incorporate it into their existing style of work – I feel like we’d get a lot of richness there.

As for the magic world in general: I do hope this will inspire magicians to consider other aspects of their artform. What kind of messages are they sending with their patter or their tricks? (Like the African cannibals mentioned above) Why are private magic clubs still male-only, who are they excluding from their spaces? Do magic shows need to look a particular sort of way to be respected or accepted? Let’s blur the boundaries, encourage more cross-pollination, see what happens.”

4. What are some of your personal tools for working through imposter syndrome?

“Making a show all about it, hahahaha. Impostor syndrome is tricky, especially for us marginalized people where nothing we do is ever really enough, where there’s no real rhyme or reason for what succeeds and what doesn’t, and where even our acceptances and successes are conditional on us fitting in a certain way or not rocking the boat too much. Impostor syndrome seems like a natural response really – we’ve been trained to expect the other shoe to drop, to never take anything for granted.”

“I get a lot of support from my friends and peers, though it can be very frustrating when they go “of course you’re great!! don’t be down on yourself!!” and meanwhile you’re dealing with your 100th rejection (especially when the feedback from that rejection is “you’re great, we just picked someone else” – so your quality doesn’t even matter!!). This is where the approach of “signing up for anything that looks interesting” can come in handy – some things are low stakes anyway, or of course, I wouldn’t know much because I’m new, so don’t worry about it. Also therapy. Lots of therapy.”

5. What do you have in mind for your next project since your career and skills are so versatile?

“I’m interested in seeing where I can do with the ‘Queer Lady Magician’ concept, beyond just this particular show. I have visions of a QLMverse with further stories, more tricks, more narratives. I would love to really push its interactivity more – one of my big dreams is to produce an Alternate Reality Game and if I can make it happen with QLM that would be amazing.

With this particularly unique skill set and singular perspective, Tiara has clearly carved out her niche in the entertainment industry. By successfully intertwining her many interests and talents she is far from an impostor and telling her story on stage, Tiara is bringing to the forefront the versatility of the brown girl experience, no matter what part of the world you may be in.