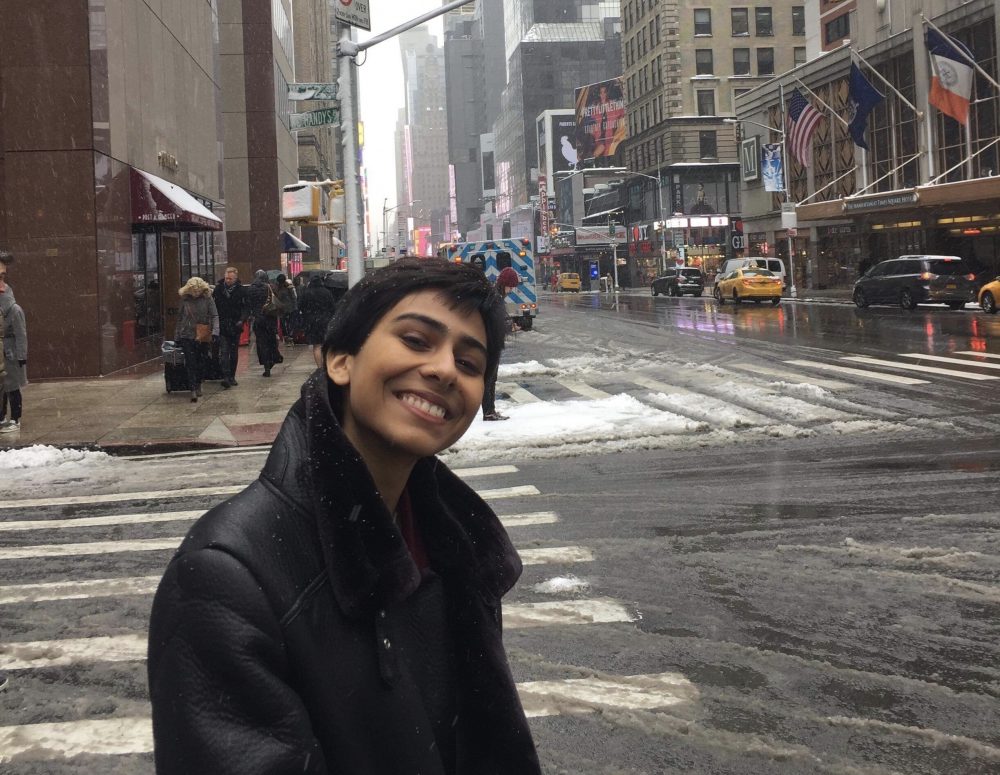 I first heard about queer aesthetics in my Intro to Women’s, Gender, and Sexuality Studies class, when we were talking about Pride earlier that summer. This discussion made me realize that I had been subconsciously performing queer aesthetics for a few years, not aware that there was an encompassing term I could use to describe my desire to be able to communicate my queerness through my visible self. I understand queer aesthetics to mean any form of denoting queer identity through an aesthetic, or way of physical existence and viewing. I’ve always been intrigued by the idea of queer performance through aesthetics, primarily in modern art and fashion. As a multicultural individual, I have been especially preoccupied with cross-cultural comparisons of queer aesthetics, or how people across the world engage with queerness through art, literature, object, and culture in seemingly infinite ways.

Learning about queer aesthetics from an academic context was revolutionary for me. I suddenly had the language to describe why I enjoy dressing erratically – switching back and forth from stereotypically femme to masc clothes, trying to listen to as many queer South Asian musicians as I can find, and why I get upset when people are misgendered. The way I dress, consume music, and engage in social settings are all a part of my queer aesthetic.

“As someone who usually presents as femme-androgynous, I was perpetually concerned by how my partner and I were being perceived. To be honest, I was mostly nervous that people would forget that I’m queer because my partner was a cis guy.”

And it took me a while to readily admit it, but queer aesthetics can also be pretty harmful. My senior year of college, my partner was a cis, white guy. As someone who usually presents as femme-androgynous, I was perpetually concerned by how my partner and I were being perceived. To be honest, I was mostly nervous that people would forget that I’m queer because my partner was a cis guy. So, I did what any libra/indecisive and vain artist would do and I chopped my hair off to look more masc and nonbinary. I started getting dysmorphic about my body and didn’t like wearing dresses or tight clothes. I’m still working on accepting and respecting my body for what it is. I didn’t realize it at the time, but I was really caught up in the context of my relationship, rather than the content.

This anxiety surrounding how I thought I was being perceived was extremely invalidating and led to a lot of insecurity and harmful self-critique. And ultimately, it led to me being an invalidating and harsh partner at times. But now, as I learn to claim queer aesthetics for myself, I’m redefining the role that it plays in my relationships. I’m relearning how to understand queer presentation and performance in a fulfilling way. And I have found that doing this, taking time to deconstruct and reflect on the plethora of ways that I embody queer aesthetics, has also become a really prolific method of self-care.

Now, I try my best to follow my instincts when it comes to embodying queer identity and let go of my anxieties about its perception. I don’t feel guilty for dressing femme, and I usually feel pretty good in androgynous clothes too. I’m working on feeling better about loving cis men, and understanding that I am queer regardless of how my ideas and actions are interpreted by others. I’m reshaping queer aesthetics to fit the mold that I want, to fit me, and it feels really good.

Vrinda is a recent graduate of the College of Wooster, where they became an expert on the 2002 religious riots in Gujarat, India, the perfect ranch to pizza ratio, and dealing with white feminists. You can now find them begrudgingly packing their life up and getting ready to enter adulthood.

Disagreements are Normal When you Love Someone

Supporting the Mental Health of South Asian Aunties and Uncles