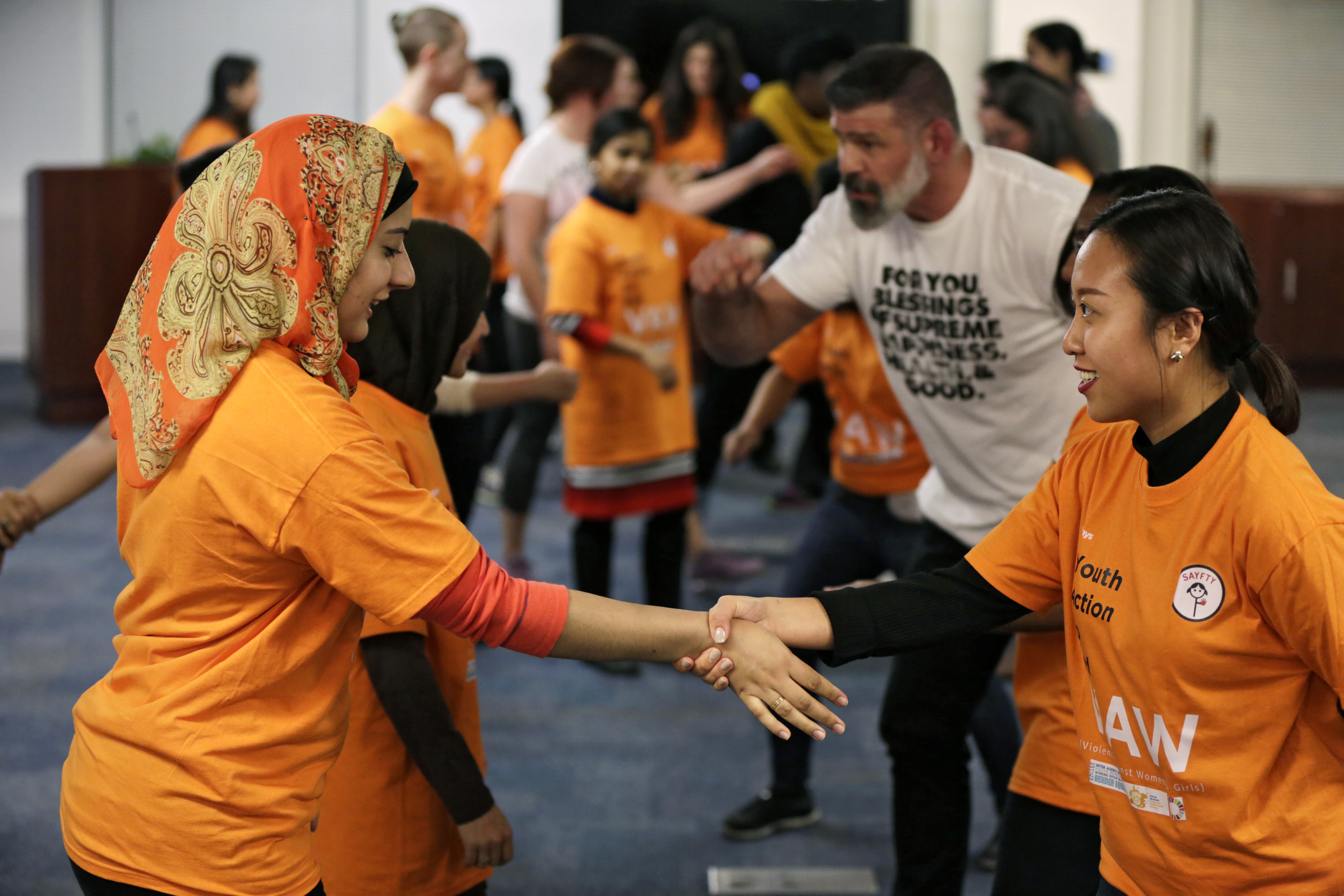 One out of three women will be sexually harassed during the course of their lifetimes. Violence against women affects us all. What are you doing about it?

“A woman is raped every 20 minutes in India. Gender violence, in all its forms, is a broad and complex social problem in India. The horrific 2012 gang rape of Jyoti Singh that captured global media attention deeply impacted me, highlighting my own experience with sexual harassment while living in India. I no longer wanted to be a silent bystander; I wanted to enable Indian women to take charge of their own safety.”

That was the motivation behind starting Sayfty. Our mission is to educate and empower women and girls against gender-based violence. We channel our efforts through advocacy, self-defense workshops, and social media engagement to promote gender equality for women and girls around the globe.

Our Indian culture does an excellent job of perpetuating gender stereotypes. While my parents always encouraged me to speak up and voice my opinions on most issues, many girls around me didn’t have that freedom. Women and girls in India are often discouraged from speaking up, challenging norms and having a voice. While they preach respect, creation, and value of femininity, patriarchal norms prevent them from these ideals. At Sayfty, we are constantly challenging these gender stereotypes and disband these antiquated notions to empower females. Through our weekly #sayftychats on Twitter, we create a safe online space to have open conversations on topics related to women’s safety and gender equality. With more than 175 Twitter chats under our belt, our weekly global reach is approximately 9-10 million. The more taboo a topic, the higher the chance of it being on #sayftychat.

There are 1.8 billion youth in the world and their voices matter. At Sayfty we regularly engage the global youth through our online and offline campaigns. Three high school students who recently interned with us, started the #IFeelUnsafeWhen campaign. The goal of this campaign is to understand what makes people unsafe. To participate in the campaign, all you have to do is share with us what makes you feel unsafe? Your answers will help us understand trends (and seek solutions) in what makes people feel unsafe in their city. We are already beginning to see some trends in what makes people feel unsafe. This word cloud shows us the common recurring words when people share through the campaign. Learn more here.

Lastly, Sayfty conducts self-defense workshops for girls and women. During the #16DaysOfActivism against gender-based violence, Sayfty partnered with UN Women and grassroots organizations in 16 countries, to organize 16 self-defense workshops, empowering more than 800 young women (aged 16-30 years). The goal of these workshops was to give women and girls the basic tools needed to stay alert and safe of their surroundings.

The workshops were a huge success. Ninety-nine percent of the participants said they would be interested in learning more about self-defense to keep themselves safe. Most participants found value in practicing the physical self-defense moves.

We received positive feedback on the workshops and young women shared on how they will put these self-defense skills and knowledge to use in their day-to-day life.

Here is feedback from one of the participants in Seoul, South Korea.

By engaging with the youth and through global partnerships, Sayfty is on its way to making the world a safer place for girls and women.

“I volunteer with Sayfty because no person should have to sacrifice their life for their safety, and as a human being I have an obligation to help make the world a safer, gender-equal place,” Jashima Wadehra, a volunteer at SaYfty said.

Sayfty has partnered with Lululemon and Equalto to conduct a survivor’s event designed to provide individuals with resources for self-healing followed by a meditation yoga session on the evening of Friday, September 7 at 6:30 PM in New York City. 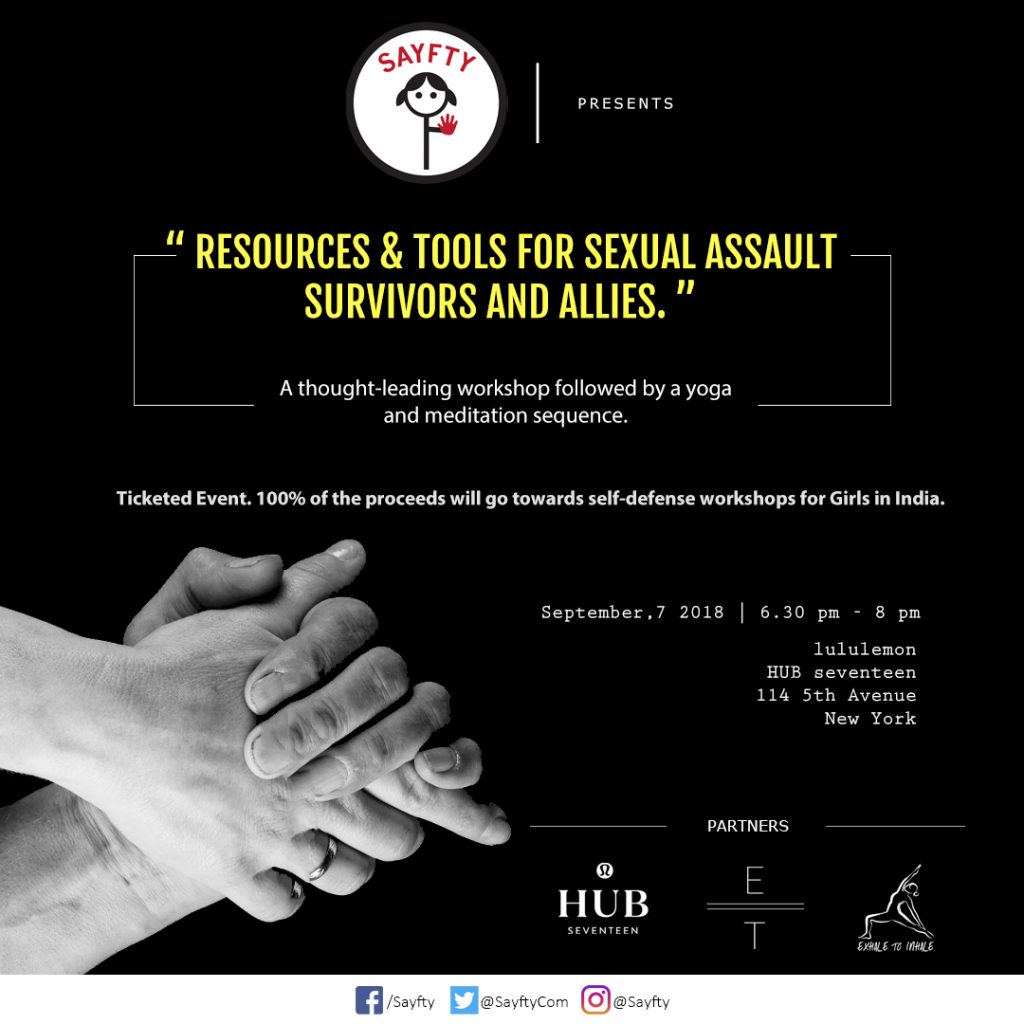 Dr. Shruti Kapoor is an award-winning gender equality activist, economist, and social entrepreneur who is passionate about the safety of girls and women. Shaken by the horrific gang rape in Delhi 2012, she founded her organization, Sayfty in June 2013 to educate and empower the women and girls of India against violence. Dr. Kapoor holds a PhD in Economics from University of California, Riverside, and has worked at international organizations like The World Bank and UN Women. She served as an Adjunct Professor of Economics at Occidental College in Los Angeles teaching economics to students. Dr. Kapoor is the co-chair of UN Women’s Task Force for Young Women’s Economic Empowerment and is an active member of the UN Inter-Agency Network on Youth Development Working Group on Youth and Gender Equality Task Force. She served on the core organizing committee of the UN’s Youth Forum for the Commission on the Status of Women 2017.